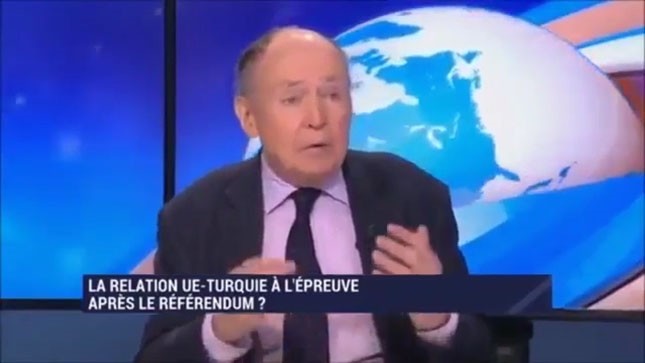 One of Turkey's options to get rid of President Recep Tayyip Erdoğan is to get him assassinated, Philippe Moreau Defarges, a professor and former diplomat, said during a TV program after Turkey's presidential referendum that resulted in a 'Yes' vote.

The scandalous remarks of the Defarges, aired on French broadcaster BFM, also suggested that a civil war would be another option to assassinating Turkey's president.

When the host of the program said an assassination can not be legitimized due to a political 'crisis', Defarges tried to justify his argument, claiming that similar situations have been observed history.

Defarges also said Turkey would not become an EU member even if it signed an accession deal since each EU member state would need to approve it.

Turkish people have called for a formal apology after Philippe Moreau Defarges made the controversial speech.

A large number of Turks living in France asked for an apology from the French Institute of International Relations and the TV channel that hosted Defarges.

Several complaints were also made on social media and to the French Radio and Television Supreme Council.