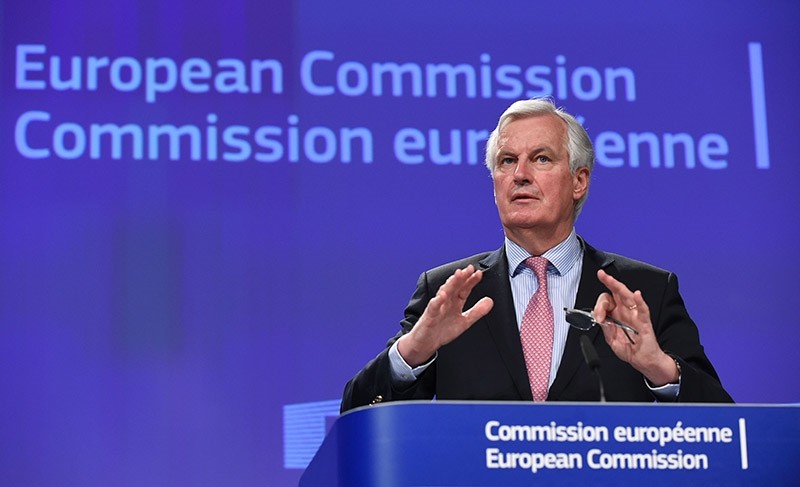 EU Brexit negotiator Michel Barnier gives a joint press conference on the negotiations with the United Kingdom Council under Article 50, at the European Union headquarters in Brussels, on May 3, 2017. (AFP Photo)
by May 03, 2017 12:00 am

Barnier warned however against the "illusion" that leaving the European Union would be quick or painless, urging Britain to start talks as soon as possible after its general election in June.

"There is no punishment, there is no Brexit bill. The financial settlement is only about settling the accounts," Barnier told a news conference as he unveiled his proposed negotiating mandate for two years of talks.

"There is no question of demanding a blank cheque from the United Kingdom, that is not a serious question," the French former European Commissioner and government minister said.

Britain's Brexit minister David Davis said his country could simply walk away from the negotiations, following a report in the Financial Times that the estimated bill for Britain's departure had soared from 60 billion to 100 billion euros.

'Nothing to be paid'

"We will not be paying 100 billion," he told British media. "In the walk-away circumstance there is nothing to be paid."

Prime Minister Theresa May has warned that she would rather Britain exit the EU without any agreement on future ties than accept a "bad deal".

But May was put on the defensive this week after leaks about a disastrous dinner in London with European Commission President Jean-Claude Juncker and Barnier.

The leaders of the other 27 EU nations on Saturday unanimously agreed a tough set of guidelines for the talks with Britain, covering issues of money, the rights of EU citizens, and the border in Northern Ireland.

They insist that Britain must settle those divorce issues before talks on a future EU-UK trade deal can begin.

Barnier warned that the "clock is ticking" for a settlement and urged London to get serious to boost the chances of reaching a deal.

"Some have created the illusion that Brexit would have no material impact on our lives, or that negotiations can be concluded quickly and painlessly. This is not the case," he said.

Barnier said the calculations of what the EU says Britain owes would be based on "rigorous methodology".

He called on Britain to guarantee "for life" the rights of three million EU citizens living in Britain, who are currently allowed to live, work and study there freely under EU rules.

Barnier will also visit Ireland next week for talks on avoiding a hard border with Northern Ireland which could jeopardize the peace process in the British province.

The EU 27 are expected on May 22 to give Barnier a formal mandate to conduct talks over the next two years with Britain.

Barnier has said he needs to wrap up talks by October 2018 to get any Brexit deal through the European Parliament in time for Britain's scheduled departure from the EU on March 29, 2019.

Britain voted to leave the EU in June 2016 in a closely fought referendum, the first country to do so.

If the first contacts in Britain's divorce from the union it entered four decades ago are anything to go by, the negotiations will be difficult.

May wants trade talks and divorce negotiations to start in parallel -- one of the demands that led Juncker to say that some in Britain "underestimate the technical difficulties we have to face".

A report in Sunday's edition of the Frankfurter Allgemeine Zeitung newspaper said Juncker left the meeting "10 times more skeptical" about the prospect of a Brexit deal.

It said sources close to the negotiations put the chances of Brexit negotiations collapsing without a deal at more than 50 percent.

Juncker reportedly informed German Chancellor Angela Merkel of his doubts, saying that May was in a "different galaxy".

Merkel then warned Britain against having "illusions" about the talks, prompting May to hit back by accusing the EU 27 of ganging up against her country.