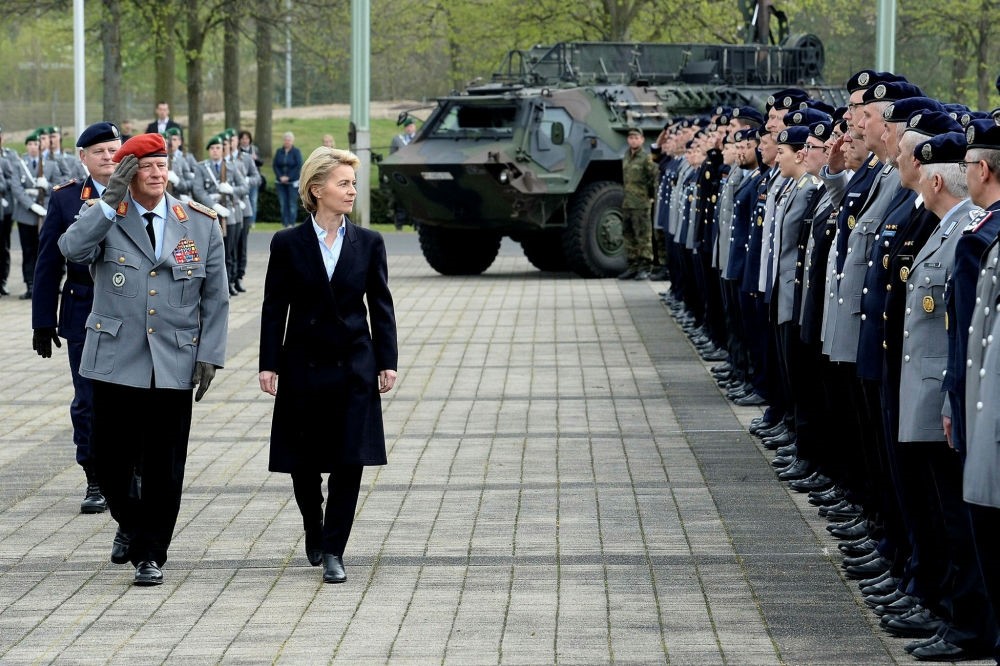 German Minister of Defense Ursula von der Leyen at the opening ceremony of the new Bundeswehr cyber command in Bonn, Germany, April 5.
by Compiled from Wire Services May 04, 2017 12:00 am

German military has been hit by escalating conflict after a recent terror scandal, as the German government has opened a terror probe to investigate the growing far-right extremism in its armed forces

The German government says it is investigating the extent of far-right activity in its armed forces after an officer was arrested last week on suspicion of planning a racist attack against migrants.

The bizarre case of a racist soldier allegedly plotting an attack while posing as a Syrian refugee and several abuse scandals have sparked a war of words between Germany's defense minister and the military. It is a dangerous political battle for Ursula von der Leyen, the first woman in charge of the Bundeswehr, who is often mentioned as a potential successor to Chancellor Angela Merkel.

German Chancellor Merkel fully supports her defense minister in her efforts to clear up the circumstances surrounding an officer who was arrested on suspicion of planning a racially motivated attack, her spokesman said yesterday.

"The German Defense Minister has the full support of the German chancellor and the whole German government to shed light on all facets of the case of Franco A., as far as the German armed forces is concerned," Steffen Seibert said at a government news conference.

German Defense Minister Ursula von der Leyen travelled to the French city of Illkirch on Wednesday as part of an investigation into a Bundeswehr soldier suspected of planning right-wing terrorist attacks while stationed there.

Von der Leyen cancelled a trip to the United States in order to give her attention to the case, which has prompted criticism of her leadership. The politician took over at the helm of the Bundeswehr in 2013 as part of Chancellor Angela Merkel's cabinet.

Last week's revelations that Franco A, a 28-year-old lieutenant, posed as a Syrian refugee in the German states of Hesse and Bavaria with the intention of carrying out attacks against migrants prompted questions about right-wing extremism in the army's ranks.

In a letter to members of the military, von der Leyen highlighted systemic problems in the Bundeswehr's leadership, but later rowed back by saying the majority of personnel conducted itself in an "impeccable, outstanding" manner.

Von der Leyen has sternly criticized military "attitude and leadership problems", highlighted by the case of the soldier and by recent sexual abuse and hazing scandals. This in turn has made her a target of chastened rank-and-file soldiers who charge she is tarring them all while dodging personal responsibility after more than three years on the job.

The escalating conflict started with the arrest last week of a soldier identified only as 28-year-old army lieutenant Franco A., stationed at a Franco-German base near Strasbourg. He came to the notice of the authorities after Austrian police caught him with a loaded handgun at Vienna airport in February. The subsequent investigation found that, amid Germany's 2015 mass influx of refugees, he had created a fake identity as a Damascus fruit seller called "David Benjamin." Incredibly, the light-haired German who speaks no Arabic managed to gain political asylum, a spot in a refugee shelter, and monthly state payments for his fictitious alter ego.
Last Update: May 04, 2017 1:52 am
RELATED TOPICS