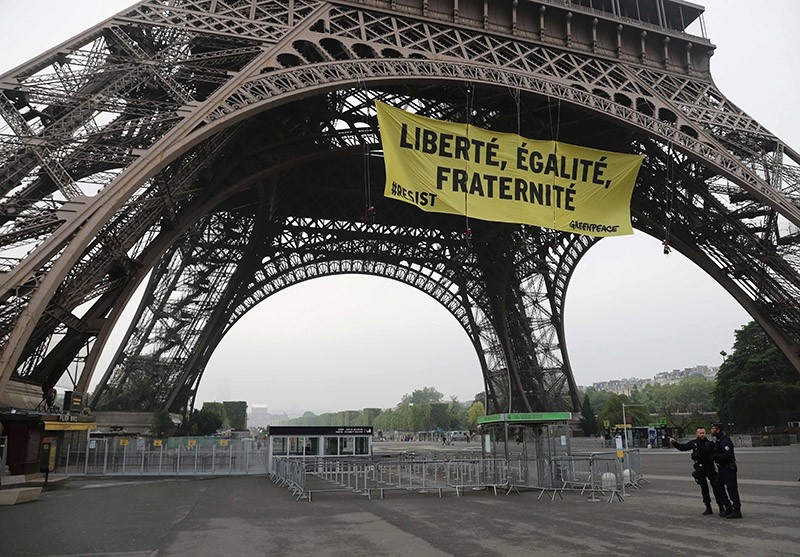 Police officers stand by after Greenpeace activists unveiled a banner reading ,liberty, equality, fraternity, on Eiffel Tower in Paris early on May 5, 2017. (AFP Photo)
by Compiled from Wire Services May 05, 2017 12:00 am

Greenpeace climbers unfurled a banner emblazoned with the French republican slogan "Liberty, Equality Fraternity" and the word "Resist" on the Eiffel Tower in Paris on Friday, a message urging people to vote against far-right candidate Marine Le Pen in Sunday's presidential election.

"We wanted to say we are against the rise of nationalism and authoritarianism in France and in other countries. This is our way of reminding everybody they all need to mobilise to defend these values of Liberty Equality and Fraternity," Jean-Francois Julliard, the advocacy group's head in France, told public radio station francinfo.

The yellow-and-black banner was hung from an arch connecting two legs of the iconic 324-metre (1,063-foot) Iron Lady, the symbol of Paris.

The Paris police department said Friday's protest had shown up "flaws" in the security of the Eiffel Tower that needed to be addressed.

France is on high alert after a string of terrorist attacks in the past two years.