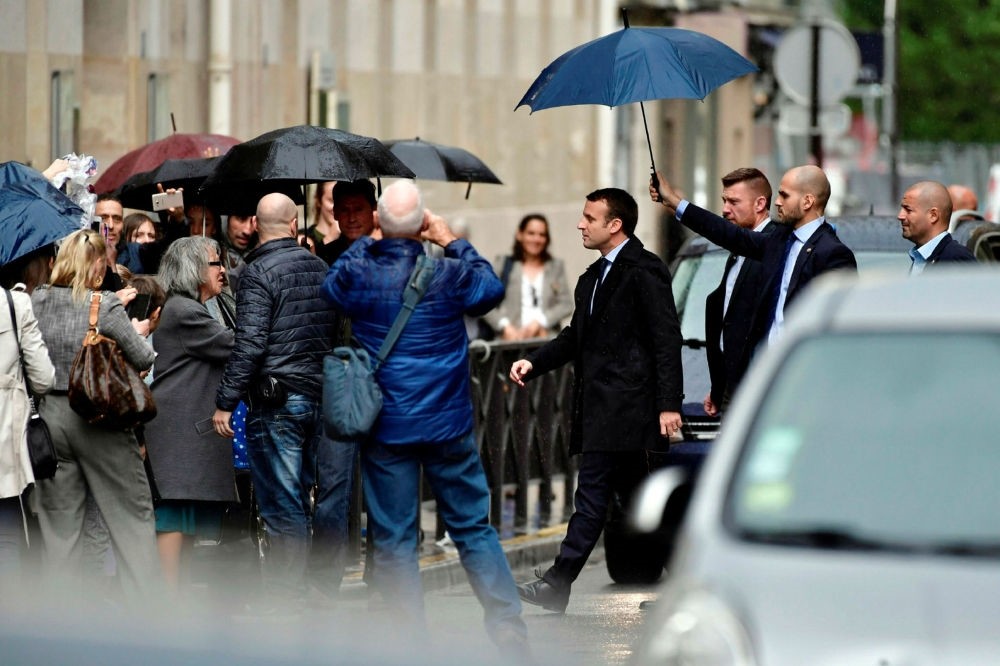 Franceu2019s president-elect Emmanuel Macron walks in a street in Paris on May 11, 2017. (AFP Photo)
by Compiled from Wire Services May 13, 2017 12:00 am
Former bullfighter Marie Sara will enter the arena of France's June legislative elections as an ally of president-elect Emmanuel Macron to battle a senior far-right official for a seat in parliament.

Macron, until last year economy minister in the outgoing Socialist government, has blown apart the traditional political boundaries of French politics by winning the presidential election last Sunday under the banner of his own one-year-old Republic on the Move (REM) party.

Macron, who will be inaugurated on Sunday, has promised to refresh France's parliament and his party unveiled 428 out of 577 candidates on Thursday.

Among those picked were a fighter pilot, a mathematician, a taekwondo black belt - and a woman who made a name for herself in the male-dominated spectacle of bullfighting.

In the battle for a seat in southeastern France, the 52-year-old former rejoneador Sara will clash with the outgoing 69-year-old far-right lawmaker Gilbert Collard. A rejoneador is a bullfighter on horseback armed with a lance.

"The president asked me to defend the values of my territory ... to fight the National Front," Sara, the former wife of French tennis legend Henri Leconte, was quoted as saying by local media.

"I'm used to entering the arena. I know who Gilbert Collard is. He is a good opponent and I am candidate to stop him from being reelected," she said.

Collard won his seat in 2012 with about 42 percent of the vote, but he lost a bid to win a local town hall in the same constituency in 2014. "Welcome to the arena, Marie Sara Lambert. One puts neither the ears nor the tails in the ballot box, but the serious future of the country," Collard said on Twitter.

Macron angered fellow centrist Francois Bayrou and faced mockery from his opponents after his party unveiled more than 400 candidates for crucial parliamentary elections in June.

"It's a big recycling operation for the Socialist party," Bayrou told L'Obs magazine, adding bitterly that candidates from his MoDem party had been offered only 35 constituencies instead of the 120 he expected.

Bayrou, a veteran centrist and presidential candidate, threw his and MoDem's support behind Macron at the end of February at a crucial time when the 39-year-old president-elect's campaign needed new momentum. "When I offered him my support, he was at 18 percent," Bayrou added.

The parliamentary selection process is seen as a tricky and risky balancing act for Macron, who will take over from widely unpopular Socialist Francois Hollande. Without his own parliamentary majority, the former investment banker will find it hard to push through his planned reforms of the labor market, pensions, unemployment benefits or education.

Macron, a former economy minister in Hollande's government, has so far failed to attract centrist members of the rightwing Republicans party, but still believes some will cross over before next Wednesday.

The most important will be his choice for prime minister, who will head the government until at least the parliamentary elections on June 11 and 18 and perhaps beyond. The choice will send a strong signal about Macron's intentions, and he has promised to pick someone with past experience of parliament and capable of managing a majority. His declared preference is for a woman.
RELATED TOPICS