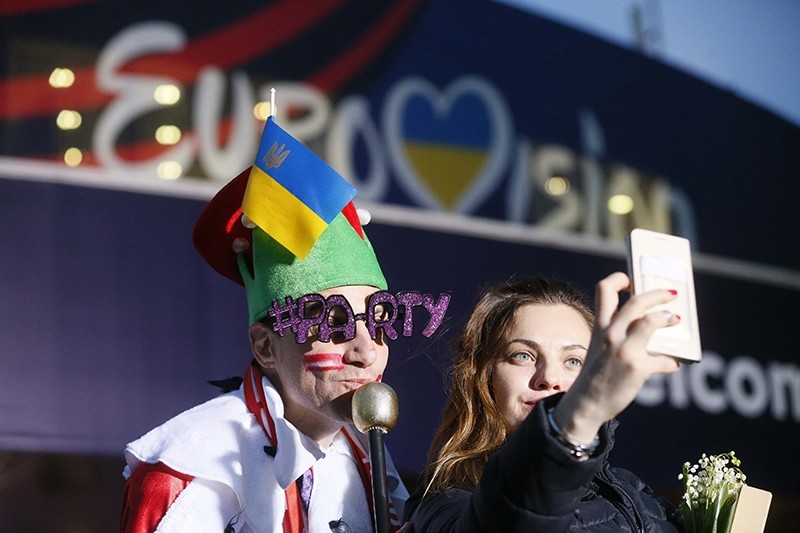 Fans take selfie before the Eurovision Song Contest 2017 Grand Final at the International Exhibition Centre in Kiev, Ukraine, May 13, 2017 (Reuters Photo)
by Compiled from Wire Services May 13, 2017 12:00 am

Ukrainian President Petro Poroshenko said Saturday he was cancelling his appearance at the Eurovision Song Contest final in Kiev after a shelling attack in the war-torn east reportedly killed four civilians.

"I planned to be at the contest final with (my wife) Marina and invited our fighters and people with disabilities to support Ukraine," Poroshenko wrote on Facebook.

"However due to the shelling of Avdiivka and the death of peaceful civilians, I took a decision to cancel my presence at the Eurovision final."

Shelling continues in eastern Ukraine despite a ceasefire agreement signed in February 2015 in Minsk that aims to end the conflict between Ukrainian government forces and the pro-Russia rebels. Each side accuses the other of violating the truce.

The head of the Ukraine-controlled Donetsk regional administration, Pavlo Zhebrivsky, said separatists had fired on the government-held industrial town of Avdiyivka late on Saturday.

'A shell hit the courtyard of a private house. Three women and one man perished," Zhebrivsky said on Facebook, adding that another man with serious wounds had been taken to hospital.

The Ukrainian military said in a statement the shelling had been carried out by rebels using artillery banned under the terms of the Minsk peace deal.

The rebels did not comment on the accusations, but a news agency linked to the separatists said two civilians on the other side of the frontline had been wounded on Saturday.

Last month a paramedic working for the European security watchdog OSCE's monitoring mission in eastern Ukraine was killed and two others were injured when their vehicle struck a mine in a rebel-controlled area.

Fighting between the pro-Russian separatists and government forces first broke out in April 2014 after a pro-European uprising in Kiev ousted Ukraine's Moscow-backed president. About 10,000 people have been killed in the three-year conflict.