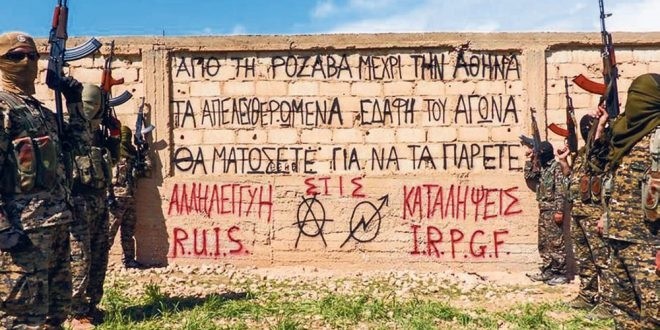 A news piece by Greek daily Eleftheros Typos claims that anarchists living in Athens have traveled to areas controlled by Democratic Union Party (PYD) terrorists in northern Syria to "learn methods of urban militancy" in order to implement them back in the European country. The revelation has alarmed Greek security and intelligence officials.

The anarchists went to the PYD-controlled zones to fight against Daesh terrorists and learn methods of warfare, the daily stated. Publishing a photo of the Greek anarchists posing alongside militants from the PKK's Syrian wing, it further stated that the anarchists had set up an organization called "The Revolutionary Association of Internationalist Solidarity" (RUIS) with the aim of bringing chaos to Greece.

Greek officials suggested that the "warriors will be trained in guerilla warfare and then will be able to apply what they have learned in their homeland," according to Eleftheros Typos.

The so-called "autonomous region of Rojava" is the totality of areas controlled by the PYD terrorists in northern Syria. Turkey, in launching Operation Euphrates Shield against Daesh terrorists last year, prevented the PYD militants from connecting the Afrin and Manbij pockets, disrupting their plans to form a "corridor" along the Turkish border.

According to official sources, Turkey added more than 16,000 suspects to its no-entry list in 2016 via intelligence sharing with other countries, under the scope of the anti-Daesh and anti-PYD fight. Nearly 4,000 foreign terrorist fighters have been deported from Turkey as a result of successful operations by security forces.

According to Interior Ministry figures, security forces also detained 3,359 suspects in 2016; 1,313 of them, including 679 foreign nationals, having been arrested due to links to the terrorist group.