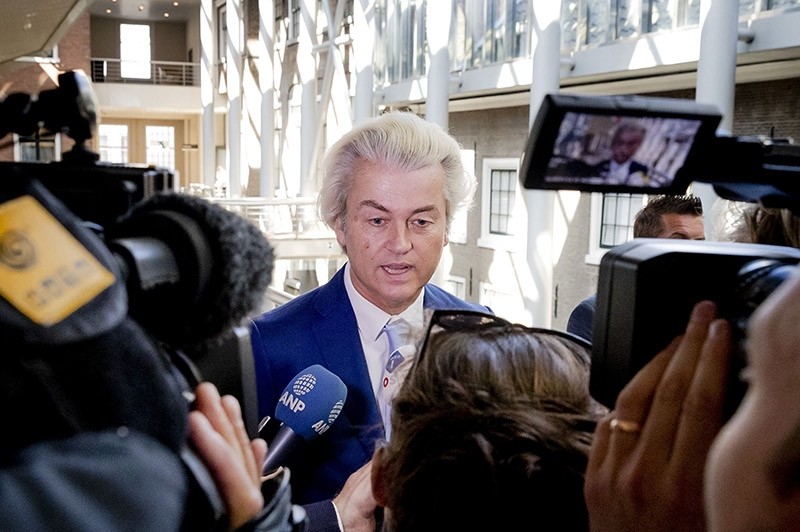 Dutch leader of the far right party Party for Freedom (PVV) Geert Wilders talks to the press (AFP Photo)
by Compiled from Wire Services Jun 02, 2017 12:00 am

Dutch investigators are probing right-wing xenophobic politician Geert Wilders over provocative remarks about Islam made in a speech in Austria two years ago, prosecutors said on Friday.

The investigation into the anti-Islam Wilders follows a request for judicial assistance from Vienna, after a March 2015 address by Wilders at a gathering of Austria's far right Freedom Party (FPOe).

Wilders is said to have told an audience that "Islam is an ideology of war and hatred" and "Islam calls on people to become terrorists -- the Quran leaves no doubt about it", Dutch daily tabloid Algemeen Dagblad said.

The speech spurred an Austrian-based Muslim organization to lay a complaint of incitement against Wilders -- which is punishable by a jail sentence.

"We have received the request from the Austrian authorities and are studying it," Dutch public prosecution service spokesman Vincent Veenman told AFP.

He said it was too early to say whether Dutch officials would decide to prosecute the platinum-haired politician.

Austrian prosecutors told the AD they decided to hand the case over to their Dutch counterparts.

"We decided not to prosecute him here but to hand over the case to our Dutch colleagues due to practical considerations," Nina Bussek, spokeswoman for the Austrian prosecutor's office told the newspaper.

Wilders responded to the announcement through a Tweet, saying: "Unbelievable. Let them catch bandits and terrorists instead of prosecuting a politician for speaking the truth about Islam."

A local Dutch court convicted him in December of discrimination, but acquitted him on a charge of hate speech over comments he made about Moroccans living in the Netherlands during a 2014 campaign rally.

That trial in particular focused on a comment made when Wilders asked supporters whether they wanted "fewer or more Moroccans in your city and in the Netherlands".

In March elections this year, while the PVV did not live up to early predictions that it would top the polls, it still managed to come in second, increasing its number of MPs to 20 from 12 in the outgoing parliament.

The 53-year-old Wilders has courted controversy with his hardline anti-Islam, anti-immigrant stance and his incendiary insults against Moroccans and Turks. He has vowed in his party's one-page manifesto that if elected he would ban the sale of Qurans, close mosques and Islamic schools, shut Dutch borders and ban Muslim migrants.