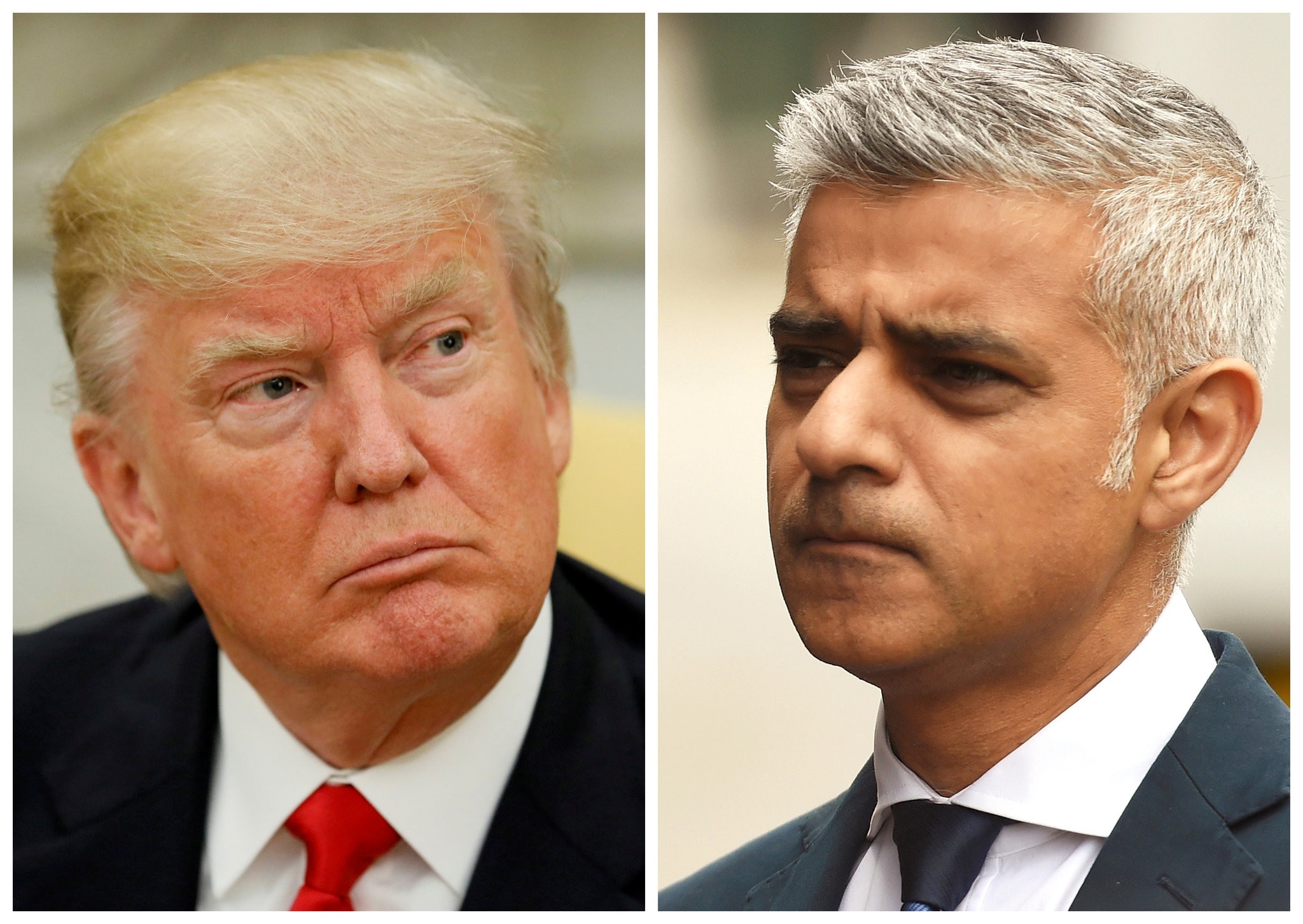 A combination photo shows Trump (L) in the Oval Office at the White House in Washington, DC, U.S. on May 31, 2017 and Mayor of London Sadiq Khan at the scene of the attack on London Bridge and Borough Market in central London. (REUTERS Photo)
by Jun 06, 2017 12:00 am

Trump has lambasted Khan on Twitter, accusing him of making a "pathetic excuse", for saying Londoners should not be alarmed by the sight of additional police on the streets of the British capital after Saturday's attack that killed seven people.

"The invitation has been issued and accepted and I see no reason to change that, but as far as what Sadiq Khan has said about the reassurances he's offered the people of London, I think he was entirely right to speak in the way he did," Johnson said in a BBC radio interview when asked whether Trump's state visit should be canceled.

No date has been set for the visit, which was agreed during May's visit to Washington in January and viewed as a sign of her desire to maintain good ties with Britain's traditional close ally as Trump began his presidency.

"I don't wish to enter into a row between those two individuals," Johnson said of Trump and Khan, adding they are "probably perfectly able to stick up for themselves."

May has said Khan is doing a good job, echoing public sentiment across London.

On Tuesday, the Conservative prime minister told a political rally in response to a question about Trump's tweets, "I think Donald Trump was wrong in the things that he has said about Sadiq Khan."

Trump and Khan, the son of Pakistani immigrants and the first Muslim elected as London's mayor, have been at odds since Khan denounced as "ignorant" Trump's campaign pledge to impose a temporary ban on Muslims entering the United States. Since taking office on Jan. 20, Trump has ordered temporary travel restrictions on people from several Muslim-majority countries, although the ban is currently held up by federal courts.

Asked during a TV interview on Monday evening if he would like Trump's visit to be called off, Khan, a member of Britain's opposition Labour party, said his position remained the same.

"I don't think we should roll out the red carpet to the president of the USA in the circumstances where his policies go against everything we stand for," Khan told Channel 4 News.

Tim Farron, leader of the opposition Liberal Democrats, called on May on Monday to cancel the state visit, saying Trump was insulting Britain's values "at a time of introspection and mourning."

Speaking at a fundraising event on Monday, she did not name Trump but said it was "not the time to lash out, to incite fear and use trash talk and terror for political gain" the Washington Examiner reported.

Deputy White House spokeswoman Sarah Sanders told reporters on Monday that she did not think it was correct to characterize Trump's tweets as "picking a fight" with Khan.

As UK police name third jihadi, Italian source says he had been flagged

Notre Dame attacker shouted 'this is for Syria' before being shot

Asked if Trump was attacking the mayor because he is Muslim, Sanders replied: "Not at all. And I think to suggest something like that is utterly ridiculous."

"Every time he puts something out there he gets criticized by the media. All day, every day," Trump Jr. said in an interview with ABC's "Good Morning America" broadcast on Tuesday.

British author J.K. Rowling said on Tuesday that if a state visit did go ahead, Trump's tweets related to the attack should be enlarged and shown wherever he goes.

"I'd rather he didn't come, but if he does, I'd like his vile Tweets juxtaposed against whatever he's been coaxed to read off an autocue," Rowling, celebrated for her Harry Potter books and a frequent critic of Trump, wrote on Twitter.