France takes hardline against migrants ahead of elections 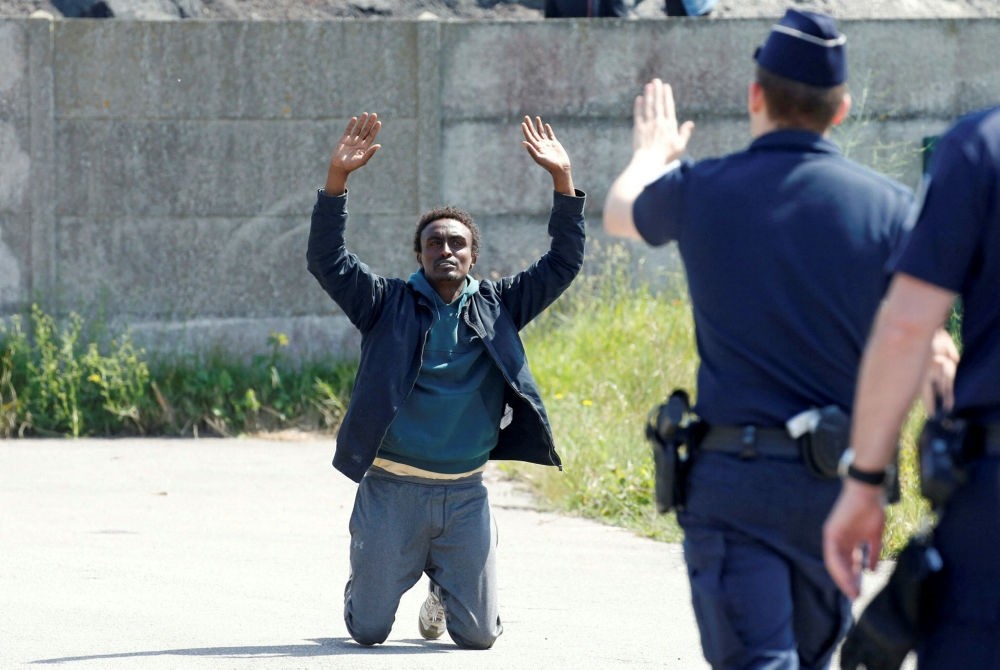 French riot police signal to a migrant on his knees as French authorities block their access to a food distribution point in Calais, France, June 1.
by Daily Sabah with Reuters Jun 07, 2017 12:00 am

Following a recent surge of Calais migrants trying to reach the U.K., French Interior Minister Gérard Collomb announced that he has sent "three additional units of mobilized forces including more than 150 policemen and gendarmes" to block any "jungles" from reoccurring in the area, according to French daily Le Monde reports yesterday.

Collomb also recalled that he intends to apply the Dublin Regulation, specifying that people, "Whose asylum applications have been placed under the jurisdiction of another member state must be readmitted to that state." The French minster went on to say that "The main priority is to dry up the flow of arrivals." A complex EU rule known as the Dublin Regulation indicates that asylum-seekers should have their cases processed in the first country that they enter in the bloc before being returned there, if necessary.

Speaking on the increasing number of migrants in Hauts-de-France, Collomb said: "We must first suppress the breaches of public order and fight smugglers."

Charities have accused police of using excessive force against migrants and preventing aid groups from distributing meals in Calais, where about 400 people have returned following the dismantling of a camp last year.

Regional police chief Fabien Sudry said security services had respected the law. "In a country where the rule of law is enforced, all people can file a legal complaint and request an investigation from the police inspector general. No legal complaints have been filed at this stage regarding police violence against migrants," he told Reuters.

Migrants fleeing poverty and war in the Middle East, Asia and Africa go to Calais hoping to cross the short stretch of sea to the U.K. by trying to get onto trucks and trains, or even walk through the tunnel under the English Channel.

Hundreds of migrants and refugees have been returning to the port city despite the dismantling of the "jungle" camp that housed thousands of people late last year. Dozens of police are still deployed permanently in the area where the camp once stood.

"These last few days, in the mornings, security forces have been coming to remove the migrants," Lucie Favry, from local aid association Utopia 56, told members of the media at a news conference. "They gas their sleeping bags to make them unusable and they gas or put holes in water canteens," she said.

The association said it had gathered eyewitness accounts from mainly Eritrean migrants who said they had been intimidated, beaten with truncheons or punched in the face.

In March, the mayor of Calais signed a decree banning gatherings that could stop aid groups from distributing meals on the grounds that it was causing a rise in ethnic tensions and conflict between rival groups of migrants. Francois Guennoc, a spokesman for local charity Auberge des Migrants, said police officers were now actively preventing volunteers from distributing food and water. "Every day we are seeing manhunts, illegal violence at the hands of the police, harassment of refugees and the prevention of the distribution of water and meals," Guennoc said.