Conservatives ahead but set to lose majority in UK election: exit poll 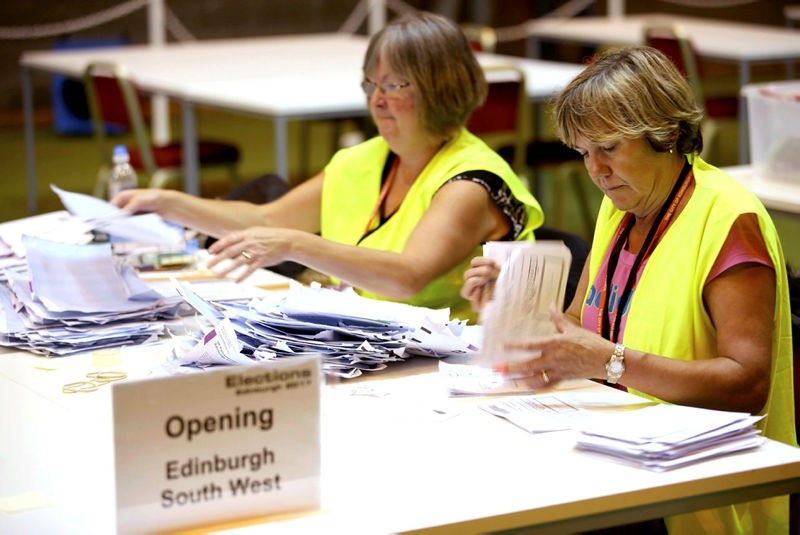 An exit poll suggested Thursday that British Prime Minister Theresa May's gamble in calling an early election has backfired spectacularly, with her Conservative Party in danger of losing its majority in Parliament.

An opposition Labour Party that had been written off by many pollsters surged in the final weeks of a campaign that was marred by deadly attacks in Manchester and London. If accurate, the result will confound those who said Labour's left-wing leader, Jeremy Corbyn, was electorally toxic.

The survey predicted the Conservatives will get 314 seats and the Labour Party 266. It projected 34 for the Scottish National Party and 14 for the Liberal Democrats.

Based on interviews with voters leaving polling stations across the country, the poll is conducted for a consortium of U.K. broadcasters and regarded as a reliable, though not exact, indicator of the likely result.

If confirmed, the result will be humiliating for May, who called a snap election in the hope of increasing her majority and strengthening Britain's hand in exit talks with the European Union. If she has failed, she could face pressure to resign.

"If the poll is anything like accurate, this is completely catastrophic for the Conservatives and for Theresa May," former Treasury chief George Osborne told ITV.

A party needs to win 326 seats in the 650-seat House of Commons to form a majority government. The Conservatives held 330 seats in the last Parliament, compared with 229 for Labour, 54 for the Scottish National Party and nine for the Liberal Democrats.

During the last election, in 2015, the Conservatives did better than the exit poll predicted, and senior Conservatives said Thursday that they would take a wait-and-see approach.

"It's still very, very early in the evening," said Northern Ireland Secretary James Brokenshire. "It's too early in the night to be drawing conclusions."

The forecast is much better than expected for the opposition Labour Party, which had been expected to lose seats.

It could also be bad news for the Scottish National Party, which is predicted to lose 20 of its 54 seats — though the pollsters caution that there is a lot of uncertainty around the Scottish forecast.

A big loss could complicate the SNP's plans to push for a new referendum on Scottish independence as Britain prepares to leave the European Union.

The poll was released after polls closed at 10 p.m. (2100GMT), ending an unsettled national election held in the shadow of three deadly attacks in as many months.

Results will come in overnight for all 650 seats in the House of Commons.

May called the election three years ahead of schedule, at a time when her party was well ahead in the polls. But attacks that killed 30 people in Manchester and London twice brought the campaign to a halt, sent a wave of anxiety through Britain and forced May to defend the government's record on fighting terrorism.

Eight people were killed near London Bridge on Saturday when three men drove a van into pedestrians then stabbed revelers in an area filled with bars and restaurants. Two weeks earlier, a suicide bomber killed 22 people as they were leaving a concert in Manchester, and five people died during a vehicle and knife attack near Parliament on March 22.

Rachel Sheard, who cast her vote near the site of the London Bridge attack, said the election had not gone as expected — and that it certainly wasn't about Brexit.

"I don't think that's in the hearts and minds of Londoners at the minute, (not) nearly as much as security is," said Sheard, 22. "It was very scary on Saturday."

When May called the election seven weeks ago, she was seeking to capitalize on opinion polls showing that her Conservatives had a wide lead over Labour. She became prime minister through a Conservative Party leadership contest when Cameron resigned after voters backed leaving the European Union.The time seemed right to seek her own mandate from the British people. She argued that increasing the Conservative majority in Parliament would strengthen Britain's hand in EU exit talks.

But things did not go to plan.

Brexit failed to emerge as a major issue in the campaign, as both the Conservatives and Labour said they would respect voters' wishes and go through with the divorce.

May, who went into the election with a reputation for quiet competence, was criticized for a lackluster campaigning style and for a plan to force elderly people to pay more for their care, a proposal her opponents dubbed the "dementia tax." As the polls suggested a tightening race, pollsters spoke less often of a landslide and raised the possibility that May's majority would be eroded.

In her final message to voters, May tried to put the focus back on Brexit.

"I can only build that better country and get the right deal in Brussels with the support of the British people," she said. "So whoever you have voted for in the past, if that is the future you want then vote Conservative today and we can all go forward together."

Corbyn, an old school left-winger widely written off at the start of the campaign, has drawn thousands of people to upbeat rallies and energized young voters with his plans to boost spending on health and education after years of Conservative austerity.

Corbyn told supporters at his final rally that Labour's campaign had "changed the debate and given people hope. Hope that it doesn't have to be like this; that inequality can be tackled; that austerity can be ended; that you can stand up to the elites and the cynics. This is the new center ground."

Security dominated the late stages of the campaign, after the attacks in Manchester and London. May said this week that she would consider rewriting human rights legislation if it gets in the way of tackling extremism.

Corbyn, meanwhile, accused Conservatives of undermining Britain's security by cutting the number of police on the streets.

While security was on many voters' minds, it was far from the only issue.

"It's important, but it's only one issue amongst several," said 68-year-old Mike Peacroft. "I wouldn't necessarily say it's at the top. Obviously at my end of the (age) spectrum I'm more interested in things like pensions and so forth, NHS health care — plus schooling, those are really my main concerns."