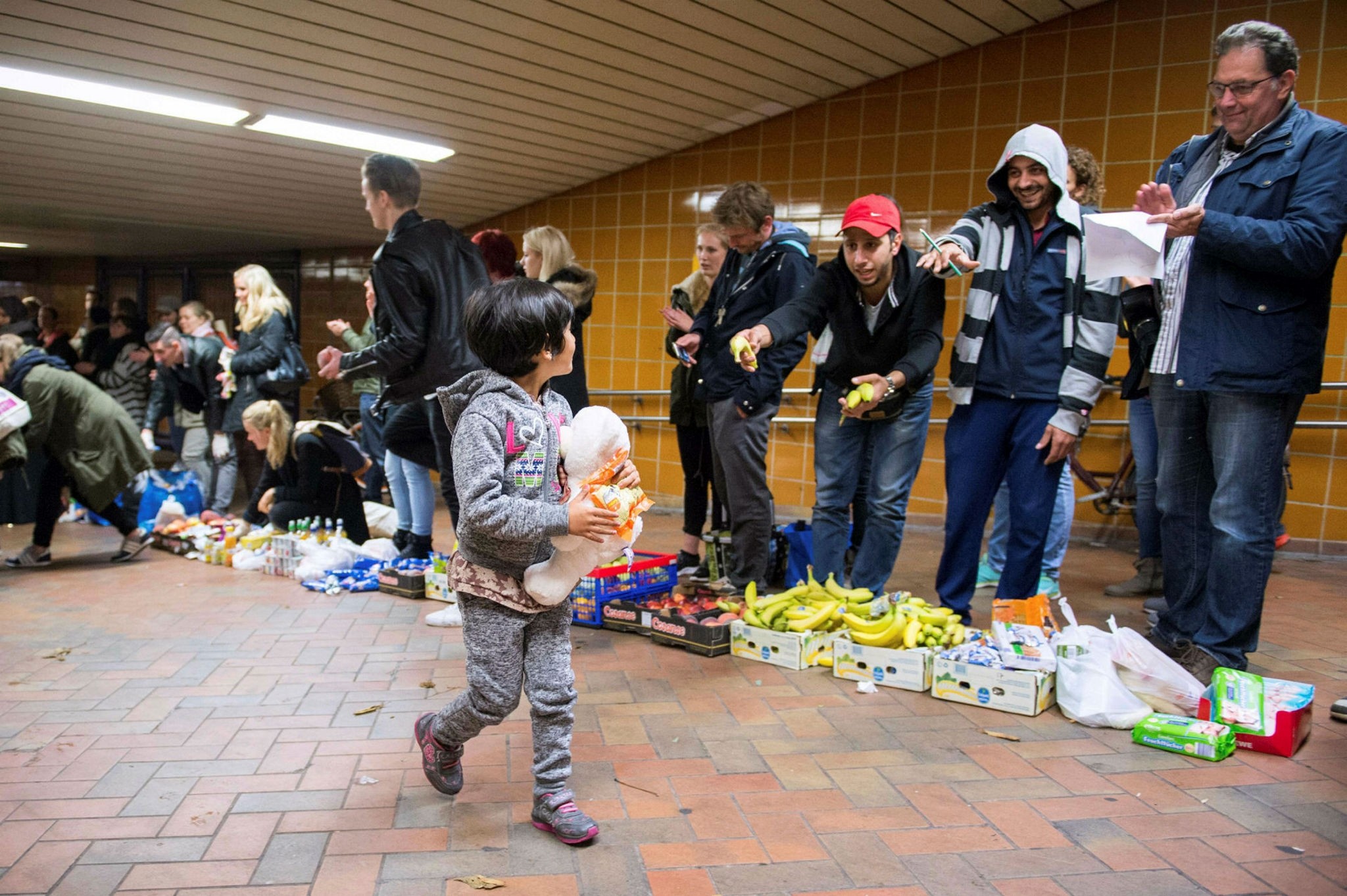 A migrant girl walks past volunteers who distribute food and drinks to migrants after their arrival at the railway station of Hamburg.
by Daily Sabah Jun 08, 2017 12:00 am

As many as 5,000 fake paternity cases have been reported in a year as the number of poor German men claiming paternity of a migrant's child in exchange for cash rises in the country

German broadcaster Rundfunk Berlin-Brandenburg (RBB) has published a report revealing some 700 cases in Berlin alone, with Ole Schröder, parliamentary state secretary of the German Federal Ministry of the Interior, saying that "there are many unreported cases."

Schröder, a member of German Chancellor Angela Merkel's Christian Democrats Union (CDU), said, "We have a lot of evidence from the immigration authorities that fake fathers are making money out of this; in other words, this involves a considerable amount of criminality."

In a more peculiar case, the RBB reported that a man who had posted National Socialist imagery and symbolism on the internet, an anti-constitutional crime in Germany, claimed to be the father of a Vietnamese baby.

The situation is so bad that some "fathers" have claimed as many as 10 children. "The fathers do not pay [to support] the children because they often live off of social assistance," reports RBB.

The pregnant immigrant women involved in this racketeering mainly come from the Middle East but there are also many cases among Asian and African women, as well.

According to the RBB, a new law is being drafted to tackle the complicated situation that will not leave the affected children stateless. In addition, according to German law, the legal paternal guardian of a child does not have to also be the biological father, further complicating legal matters and rendering DNA tests almost redundant.

For this reason, in 2013, the German Constitutional Court ruled that even suspicious cases, which entail possible fake paternity, should effectively not yet be investigated or acted upon, due to the delicate "grey area" of the legal situation of the affected children.

There are reports of immigrant women paying as much as 5,000 euros to bribe German men into the paternity scheme for German residency, which also means that the baby would also get full German citizenship, similar to the "anchor baby" situation in the U.S., where pregnant women cross U.S. borders illegally to give birth in U.S. territory, allowing their babies to be born on U.S. soil and gain full American citizenship under the 1868 14th Amendment to the U.S. Constitution.

Due to an unprecedented influx of around 1 million people into Germany in 2015 alone, state, as well as federal authorities in the country, have moved to tighten asylum laws.

Much like in the Brexit referendum, the American, Dutch and French elections, immigration is a number-one issue among voters in Germany. Some German states have been hit harder than others as they are unable to house or integrate the massive influx from Africa and the Middle East who widely prefer to form their own communities and are generally resistant to integration in the first place.

Even though the influx continued in 2016, it also dropped significantly after the controversial deal between the EU and Turkey, which saw the closure of the "Balkan route" and has left tens of thousands "trapped" in Greece.

The latest polls suggest that the anti-mass immigration touted by the Alternative for Germany (AfD) has sufficient support to enter the German Bundestag for the first time in its four-year history.