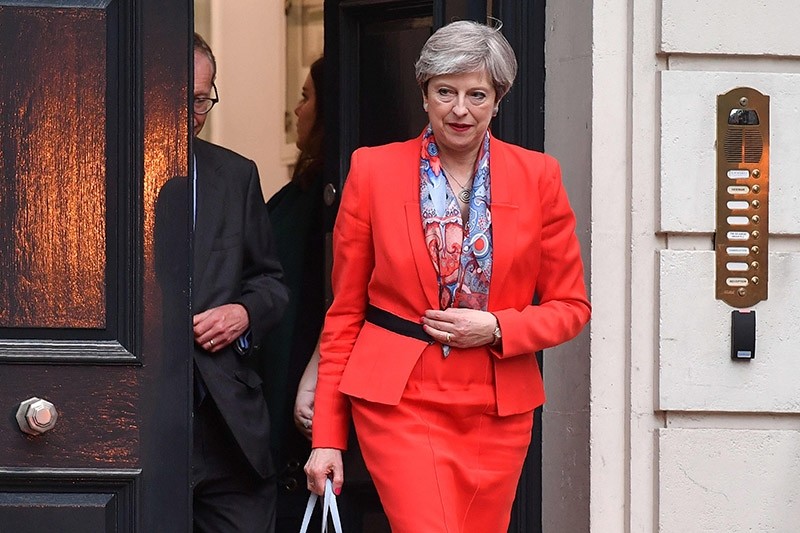 British Prime Minister Theresa May leaves the Conservative Party HQ in central London, on June 9, 2017, hours after the polls closed in the British general election. (AFP Photo)
by Compiled from Wire Services Jun 09, 2017 12:00 am

British Prime Minister Theresa May's gamble in calling an early election backfired spectacularly, as her Conservative Party lost its majority in Parliament and pressure mounted on her Friday to resign.

The shock result throws British politics into chaos and could send Britain's negotiations to leave the European Union — due to start June 19 — into disarray. The pound lost more than 2 cents against the dollar.

May called the snap election in the hope of increasing her majority and strengthening Britain's hand in exit talks with the European Union with a "strong and stable government." Instead, the result means the Conservatives will need to rely on support from smaller parties to govern, with more instability and the chance of yet another early election.

The results confounded those who said Labour's left-wing leader, Jeremy Corbyn, was electorally toxic. Written off by many pollsters, Labour surged in the final weeks of the campaign. It drew strong support from young people, who appeared to have turned out to vote in bigger-than-expected numbers.

As she was resoundingly re-elected to her Maidenhead seat in southern England, May looked tense and did not spell out what she planned to do.

"The country needs a period of stability, and whatever the results are the Conservative Party will ensure we fulfil our duty in ensuring that stability," she said.

Many predicted she would soon be gone.

"Clearly if she's got a worse result than two years ago and is almost unable to form a government, then she, I doubt, will survive in the long term as Conservative Party leader," former Conservative Treasury chief George Osborne said on ITV.

Corbyn said May should "go ... and make way for a government that is truly representative of all the people of this country." Speaking after being re-elected to his London seat, Corbyn said the election result means "politics has changed" and voters have rejected Conservative austerity.

The result was bad news for the Scottish National Party, which lost about 20 of its 54 seats. Among the casualties was Alex Salmond, a former first minister of Scotland and one of the party's highest-profile lawmakers.

The losses complicate the SNP's plans to push for a new referendum on Scottish independence as Britain prepares to leave the EU. Scottish Conservative leader Ruth Davidson said the idea of a new independence referendum "is dead. That's what we have seen tonight."

May, who took over after last year's Brexit referendum, began the formal two-year process of leaving the EU on March 29, promising to take Britain out of the single market and cut immigration.

Officials in Brussels were hopeful the election would allow her to make compromises, but this has been thrown into question by the prospect of a hung parliament.

May had hoped the election would focus on Brexit, but that never happened, as both the Conservatives and Labour said they would respect voters' wishes and go through with the divorce.

"It creates another layer of uncertainty ahead of the Brexit negotiations," said Craig Erlam, senior market analyst at OANDA currency traders.

May, who went into the election with a reputation for quiet competence, was criticized for a lackluster campaigning style and for a plan to force elderly people to pay more for their care, a proposal her opponents dubbed the "dementia tax." As the polls suggested a tightening race, pollsters spoke less often of a landslide and raised the possibility that May's majority would be eroded.

Terror in the campaign

Britain has been hit with three terror attacks since March, and campaigning was twice suspended.

A suicide bomber blew himself up outside a pop concert in Manchester on May 22, killing 22 people.

The attacks led to scrutiny over May's time as interior minister from 2010 to 2016, particularly since it emerged that some of the attackers had been known to police and security services.

Labour seized on steep cuts in police numbers implemented as part of a Conservative austerity programme, although May insisted she had protected funding for counter-terrorism.