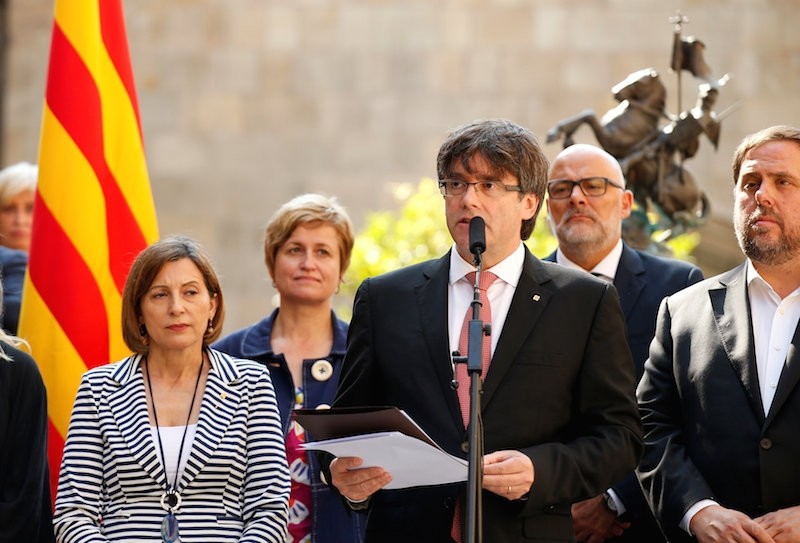 Catalonia's regional President Carles Puigdemont announces a referendum on a split from Spain outside the Palau de la Generalitat, the regional government headquarters, in Barcelona, Spain, June 9, 2017. Reuters Photo
by Compiled from Wire Services Jun 09, 2017 12:00 am

The leader of Spain's Catalonia region on Friday announced an independence referendum for Oct. 1 in defiance of Madrid. People will be asked to vote on the question: "Do you want Catalonia to be an independent state in the form of a republic," Carles Puigdemont said in Barcelona.

If Catalonia's pro-independence authorities win, they have said they will immediately start proceedings to separate from Spain. But the central government in Madrid insists the procedure is not valid and the Catalan authorities face significant challenges to even holding the referendum.

Under Article 155 of Spain's constitution, Madrid has the power to intervene directly in the running of Catalonia's regional government, forcing it to drop the vote. This could involve sending in the police or suspending the regional government's authority to rule. This is widely seen as a last resort move, however, and many analysts believe the clash will instead culminate in regional elections in Catalonia.

In 2014, Catalonia held a non-binding vote under then President Artur Mas, in which more than 80 percent of those who cast a ballot chose independence, although just 2.3 million out of 6.3 million eligible voters took part. But in holding the symbolic referendum, Mas went against Spain's Constitutional Court, which had outlawed the vote, even if it was non-binding. He was later put on trial and banned from holding office for two years.

Puigdemont, president of the Generalitat of Catalonia, still wants to go ahead however, and he wants his referendum to be binding this time even though Madrid has pledged to be just as tough this time round.

"I don't want it, I don't believe in it, and as long as I am prime minister, it won't happen," Spain's Prime Minister Mariano Rajoy said in May.

In February, the Constitutional Court ruled against the referendum and warned Catalan leaders they faced repercussions if they continued with their project.

Catalonia's officials have had little luck pushing their project abroad either.

Regional authorities also face a host of challenges just to hold the referendum without Madrid's consent. Civil servants such as the police or the heads of schools where polling stations could be set up, for instance, will be needed for the organization of such a vote. But they are stuck between a rock and a hard place.

Regardless of what they support, they would have to choose between obeying their immediate superiors and facing possible sanctions for disobeying Spanish law, or sticking by the Constitution. Aside from that, none of the usual, necessary accessories of an election would be available, such as an official campaign or an independent authority to oversee the vote. And the central government has ways to stop the referendum from going ahead. It can ask the Constitutional Court to suspend Puigdemont for disobedience, or it could take temporary control of key Catalan functions such as the police.