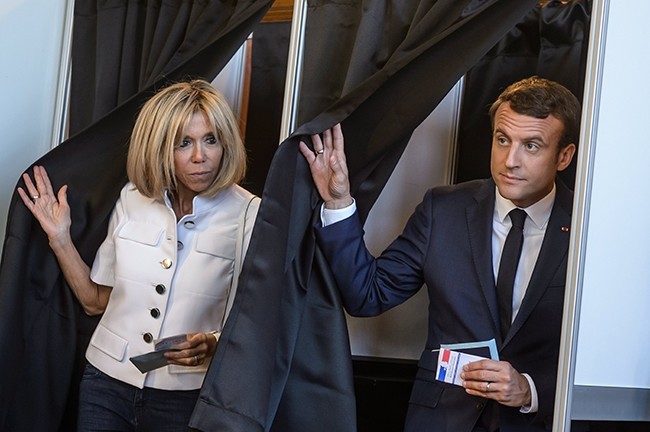 French voters head to the polls on Sunday for the first of two rounds of a parliamentary election expected to give new President Emmanuel Macron a solid majority that should allow him to carry out far-reaching reforms.

Just a month after the 39-year old ex-banker defied the odds to be elected to the head of the euro zone's second-largest economy, opinion polls forecast his one-year old party will top voting this Sunday and win most seats in the June 18 run-off.

"We want a big majority to be able to act and transform France over the next five years," Mounir Mahjoubi, a junior minister in Macron's government, told Reuters as he was canvassing for support in the northern Paris constituency where he is a candidate.

The latest opinion polls forecast that Macron's centrist Republic On the Move (LREM) party and its center-right Modem allies will get at least 30 percent of the votes on Sunday, with the conservative The Republicans and its allies at around 20 percent and the far-right National Front around 17 percent.

That outcome would transform into a landslide majority in the second round, opinion polls show.

While elections in the lower house of parliament's 577 constituencies can be tricky to predict, especially with a total of 7,882 candidates vying for those seats, even LREM's rivals have been saying they expect Macron to get a majority.

Their strategy over the past days has rather been to urge voters to make sure the opposition will be big enough to have some weight in parliament. "We shouldn't have a monopolistic party," ex-prime minister Bernard Cazeneuve, a Socialist, told Reuters.

The survival of the Socialist Party, which ruled France for the past five years but is forecast to get just between about 15 and 30 seats, is at stake, as is the unity of The Republicans, which poll second but are divided on whether to back Macron.

The National Front, reeling from a weaker-than-expected score for chief Marine Le Pen in the presidential election, could miss its target to get enough lawmakers to form a parliamentary group, though it is expected to do much better than the two deputies it had in the previous legislature.

In a country with unemployment hovering near 10 percent and that is at risk of breaking its public deficit commitments, Macron was elected president in May on pledges to overhaul labour rules to make hiring and firing easier, cut corporate tax and invest billions in areas including job training and renewable energy.

"If we really want him (Macron) to change things he needs a majority," 67-year-old voter Irena Plewa, a pensioner, said at a bustling Paris food market.

Polling stations open at 0800 (0600 GMT) and close at 1800 (1600 GMT) in most cities and two hours later in Paris and other big cities. Results will then slowly start trickling in, alongside opinion polls estimates of the results.

Very few lawmakers are expected to be elected directly in the first round.

To achieve that, a candidate would need more than half of the votes and that must account for at least a quarter of registered voters. With many fresh faces among the candidates, a political landscape divided among many forces from the far-left to the far-right and abstention predicted to be at over 40 percent, that is unlikely to happen in many constituencies.