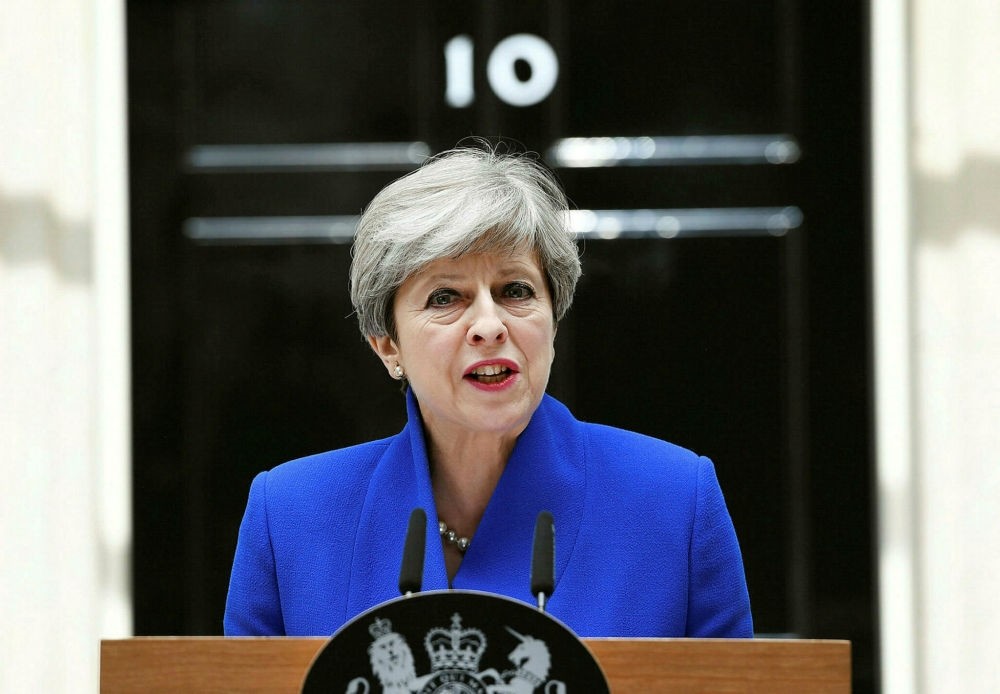 Britain's Prime Minister Theresa May gives a statement to the media outside No. 10 Downing Street in London, June 9.
by Angelos Berberakis Jun 13, 2017 12:00 am

The U.K. has historically had a bad run with coalition governments, otherwise known as ‘confidence-and-supply' agreements. Now all eyes are on the prime minister and her ability to hold the government together

Prime Minister Theresa May's gamble of increasing her majority in order to have a stronger hand in Brexit has not paid off; instead, it backfired horribly and now threatens to destabilize her government in the face of the upcoming Brexit talks with the European Union on June 19.

Opposition parties had called for a general election ever since the success of Brexit last June since technically May had not been elected. However, even though she backed the Remain campaign, she pledged to abide by the will of the British people and take Britain out of the EU in a so-called "Hard Brexit."

For months after Brexit, polls consistently showed the Conservative Party's popularity increase, as opposed to Jeremy Corbyn's Labour Party, which was steadily declining. In fact it wasn't until late April that this trend was turned on its head, and suddenly the Tories went from enjoying a 10-point lead to losing popularity in favor of Labour.

This completely unpredicted change in support came after the publishing of the Tory manifesto which, even by conservative accounts, is deeply flawed and even more deeply unpopular.

In addition to bringing back fox hunting and ditching a pledge to ban ivory trading, the manifesto also lists cuts for healthcare for the elderly as well as a near-Orwellian plan for the control of the internet in order to prevent more terrorist attacks.

May went from vowing to bring about Brexit successfully and cutting back immigration, another popular demand, to essentially going after animals and the elderly.

Ultimately, May lost 13 seats, costing her the majority, while Corbyn gained 30.

To keep power, May decided to form a coalition with the Northern Irish Democratic Unionist Party and their 10 members of parliament, which would put her over the government-forming requirement line.

However the future for May does not look bright as media outlets and critics, as well as deputies from her own party are predicting her imminent downfall.

A similar situation unfolded in 1977, when Labour decided to enter a coalition with the Liberal Democrats, a decision which is seen today as bringing about the undermining of the Labour Party and the strong rise of the Iron Lady, Margaret Thatcher, in 1979.

Another problem Prime Minister May faces is the fact that she wasn't able to commandeer a majority in the House of Commons either, leaving her underpowered.

Labour supporters on the other hand have not given up on the idea that Corbyn might well become Prime Minister yet, a fantasy that is not supported by numbers. Labour may have won 30 seats, but it still falls 64 seats short of a possibility to form a majority government, and even if it aligned with all other left-leaning parties such as the Liberal Democrats of the Greens, that would still not be nearly enough to challenge the Conservatives.

What we can take away from this situation for now is that Britain could be headed for another general election. However, it would have to be approved by deputies who are currently unwilling. It is unlikely that this will happen any time soon, as the EU talks are only days away.