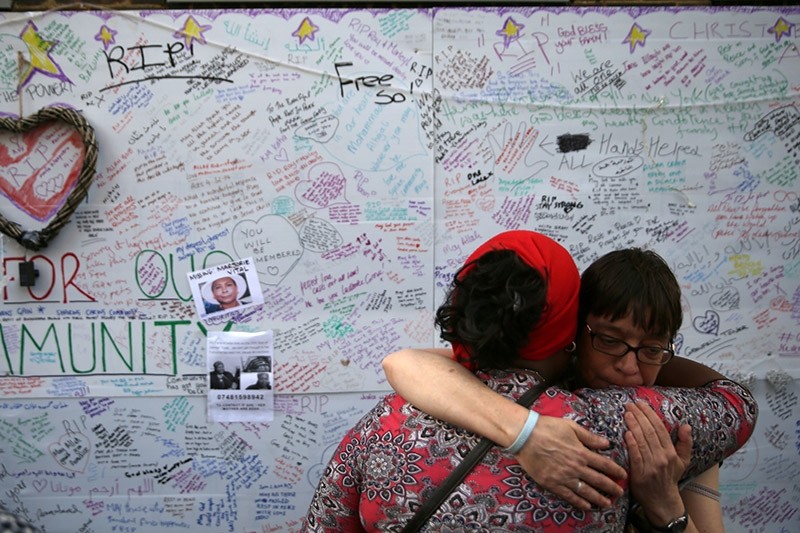 Two women embrace in front of a messages left on a wall of condolence following the blaze at Grenfell Tower, a residential tower block in west London on June 15, 2017. (AFP Photo)
by Compiled from Wire Services Jun 16, 2017 12:00 am

The toll from the London tower block fire has risen to at least 30 people dead and the flames have now been extinguished, police said on Friday.

"We know that at least 30 people have died as a result of this fire," police commander Stuart Cundy told reporters, adding that the fire was not considered to have been started "deliberately".

Meanwhile, The Sun newspaper listed 65 people who it said were still missing or feared dead in a London tower block fire.

When asked on Thursday whether the death toll could exceed 100, London police commander Stuart Cundy said: "I'd like to hope that it isn't going to be triple figures."

Meanwhile, relatives of those missing after the high-rise tower blaze were searching frantically for their loved ones.

Firefighters searching the smoldering ruin in west London recovered six bodies from the 24-story Grenfell Tower, while 11 others were located but could not yet be removed from the gutted structure.

London Police said an investigation had been launched to determine whether the blaze involved any crimes and Prime Minister Theresa May announced a public inquiry, a type of probe that's used to investigate issues of major public concern. In addition, London Mayor Sadiq Khan called for an interim report on the fire to be published this summer.

An angry crowd confronted Khan as he visited the high-rise.

"How many children died? What are you going to do about it?" asked 7-year-old Kai Ramos. As the boy pressed, the Labour politician pledged to get answers.

The tower is in the North Kensington neighborhood, a working-class, multi-ethnic area next to some of the richest neighborhoods in Britain. Some observers asked whether hazards in the Grenfell complex, which had 120 apartments that housed as many as 600 people, were ignored because its residents are mainly poor.

A tenant group had complained for years about the risk of a fire in the building, owned by the local government in the borough of Kensington and Chelsea.

Fire safety engineers were stunned at how rapidly the fire spread, engulfing the building in less than an hour in the middle of the night and preventing firefighters from reaching many people inside. Some jumped to their deaths rather than face the flames, and witnesses reported seeing small children thrown from the tower by their families in a desperate bid to survive.

Firefighters trying to race into the building were protected from the falling debris by police officers who placed riot shields over their heads.

In addition to those killed, ambulance crews took 74 people to hospitals after the fire. Thirty were still hospitalized on Thursday, with 15 in critical condition.

One of the first victims was identified — Mohammed Alhaj Ali, a 23-year-old Syrian refugee studying in London and hoping to return to help his war-torn country.

Authorities have refused to speculate on what could have started the blaze. But the focus has turned to renovations completed last year that added decorative touches to the building.

"Every single person that lives in a high rise apartment today is going to be thinking, 'How safe am I?'"

More than 1 million pounds ($1.27 million) has been raised to help victims of the fire. Volunteers and charities worked through the night to find shelter, food and clothes for people who had lost everything.

By Thursday, community centers had been so overwhelmed by food and clothing donations that they started turning away new donations.

St. Clement's Notting Dale, a church near the tower, was turned into an informal center for people searching for missing friends and family.

Signs bearing a missing persons' hotline number were tied to a fence. By the church's front door, residents taped signs looking for information about Khadija Saye, last seen on the 20th floor, and Mariem Elggwahry, last seen on the 19th floor at 2:30 a.m. Wednesday.

At Latymer Community Church a few blocks away, messages of hope and condolences were written on a board in English, Arabic and Spanish.

"Praying for auntie," one message read.