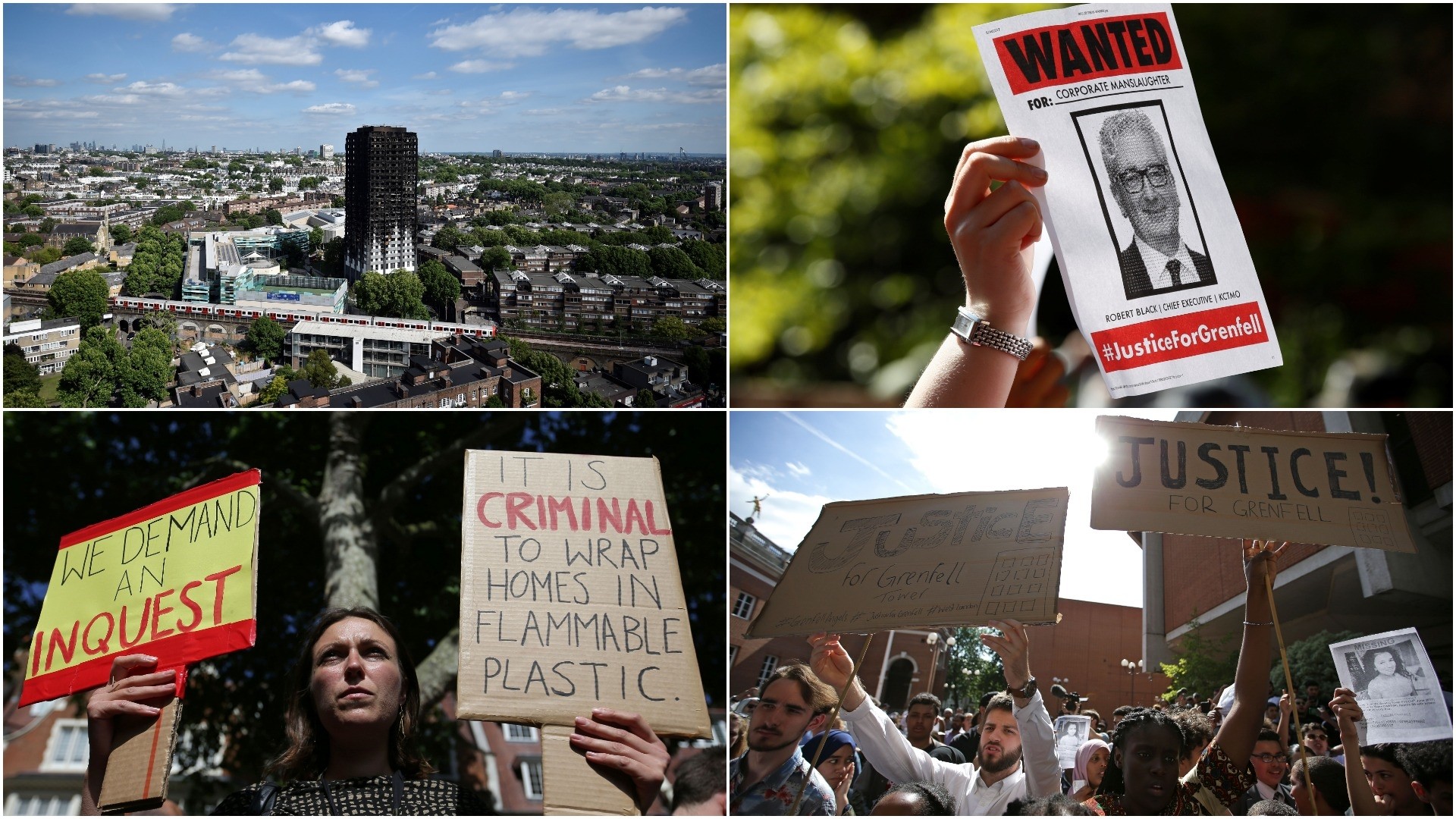 People gather outside Kensington Town Hall on June 16, 2017, to demand justice for those affected by the fire that gutted Grenfell Tower. (AFP/ REUTERS Photos)
by Jun 16, 2017 12:00 am

Several hundred protesters chanting "we want justice" stormed a town hall in London on Friday after a deadly fire at a block of flats killed at least 30 people, Reuters reporters at the scene said.

The protesters barged their way through an automatic door at Kensington and Chelsea council town hall and sought to gain entry to an upper floor. Police barred their way and scuffles broke out, a Reuters reporter said.

The protesters chanted: "We want justice", "bring them out" and "shame on you". A larger crowd of people remained outside.

Some people then left the building though others remained inside. Several dozen police, including mounted officers, were in attendance. The protesters were angered when no one from the council came out to address their concerns, reporters said.

While the deadly blaze at the Grenfell Tower in north Kensington has prompted an outpouring of generosity, it has also unleashed fury at the authorities as the charred tower was cast as a deadly symbol of a divided society.

There have been demands for answers as to how the blaze was able to engulf the 24-storey building, trapping many on the upper floors, along with complaints that not enough was being done to provide assistance for people left homeless or information about those still missing.

British Prime Minister Theresa May visited the injured in hospital on Friday but is herself under mounting criticism for not meeting victims of the blaze sooner.

After meeting residents, victims and community leaders affected by the fire, she pledged 5 million pounds ($6.39 million) of support, housing guarantees and help with access to bank accounts and cash.

"The package of support I'm announcing today is to give the victims the immediate support they need to care for themselves and for loved ones. We will continue to look at what more needs to be done," May said in a statement issued by her office.

May has been criticised from within her own Conservative Party over her response and she pledged on Thursday to hold a public inquiry into the fire at the social housing block. The death toll is expected to rise with dozens still missing.

May met victims privately at a central London hospital on Friday and had expressed her sorrow on television on Thursday after meeting emergency services personnel.

Angry crowd charges May's car, shouts "coward" and "shame on you" at her as she leaves Grenfell Tower relief center https://t.co/t4jFsZbFNE pic.twitter.com/xXCcHBTcdv

"She should have been there with the residents. You have to be prepared to receive people's emotions, and not be so frightened about people," former Conservative cabinet minister Michael Portillo told the BBC.

Mayor Khan wrote to May on Friday, saying residents felt increasingly enraged and frustrated by the slow response from the authorities.

"The local community feels their grief has been made worse by the lack of information about their missing family members and friends," he wrote. Residents in other blocks with the same exterior cladding as Grenfell Tower were concerned, he wrote.

"People are terrified that the same thing could happen to them," Khan wrote in the letter.

May's response has been contrasted with that of Corbyn, who hugged locals at the estate during his visit on Thursday, and the royals who met residents and volunteers on Friday.

"That's one of the most terrible things I have ever seen," Prince William said of the tower's blackened shell.

Some desperate residents pleaded to speak to the queen and her grandson about their plight and the fate of missing children as they left the site, with William promising he would return.

There has been growing fury on the low-rent estate where residents wanted answers on why the fire was able to spread so rapidly and why complaints about safety had been ignored.

However, Foreign Secretary Boris Johnson took to Facebook to attack Labour politicians for "political game playing", defending his record regarding the fire service as mayor of London between 2008-2016.

London police said an investigation, led by a detective from its homicide and major crime unit, would examine whether criminal offences had been committed although they said there was nothing to suggest the fire was started deliberately.

Commander Stuart Cundy said they had been able to remove the remains of only 12 victims from the building.

"Sadly, it is expected that the total will rise and it is not expected that any survivors will be found," he said. Police have said it could take months to search the building and some victims might never be identified.