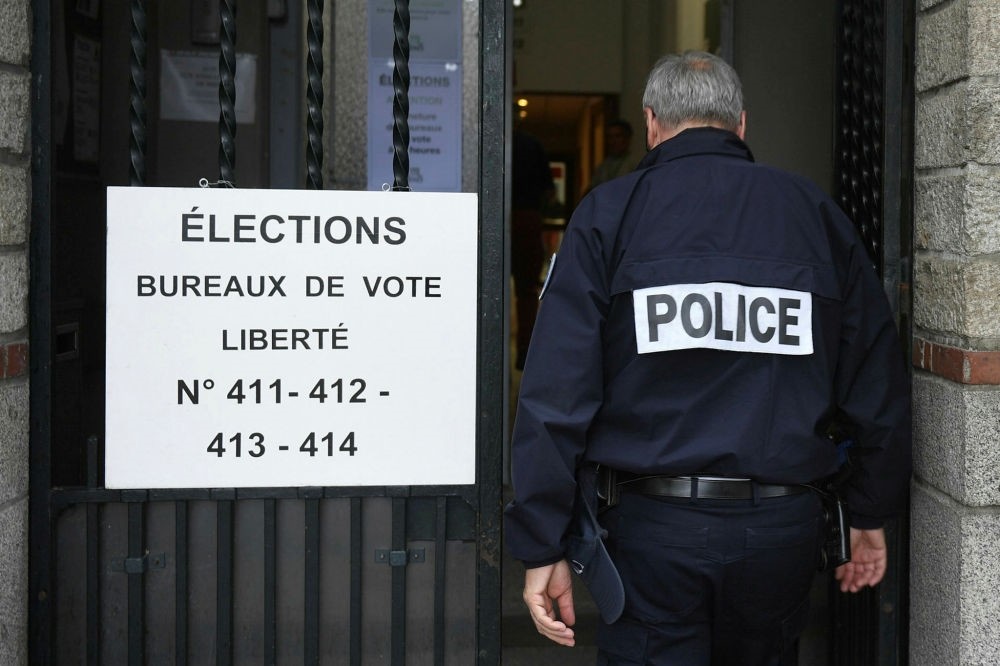 A police officer enters a polling station in Rennes during the first round of the French legislative elections on June 11.
by Compiled from Wire Services Jun 17, 2017 12:00 am

Ahead of the second round of France's parliamentary election, security concerns remain high after the violent attack on the legislative candidate in a Paris market

Leading French conservative politician Nathalie Kosciusko-Morizet was attacked and knocked out in a Paris market on Thursday while canvassing support ahead of Sunday's vote. The latest attack raised security concerns as the county has been hit by violent protests since the April-May presidential elections.

The former environment minister, at risk of losing her National Assembly seat as President Emmanuel Macron's party eyes a landslide victory in parliamentary elections, will remain in hospital overnight, the team said. News agency AFP showed pictures of a man throwing leaflets in the face of the politician, widely known in France under the acronym "NKM," and of her lying on the pavement.

"Nathalie is sorry not to be able to take part in the end of the campaign," her team's statement read. The man in his 50s called her a "crappy bobo," a derisive term for an urban hipster, AFP said. The Paris prosecutors' office said an investigation had been opened into the incident, which occurred on a Left Bank street market.

Her centrist rival suspended his campaign and politicians across the left-right divide denounced the attack. "Violence has no place in an election campaign," tweeted far-right leader Marine Le Pen. Campaigning closed at midnight on Friday. Kosciusko-Morizet, 44, was defeated by Socialist Anne Hidalgo in her bid to become the first female mayor of Paris in 2014.

Two opinion polls ahead of Sunday's second round of parliamentary elections said the centrist president and his one year-old Republic on the Move (LREM) party would win 80 percent or more of the seats in the lower house of parliament.

Those are the highest predictions of the campaign to date, and follow record-low voter turnout in the first round. Macron's opponents warn that such a majority in a country with deep political divisions is a threat to democracy. LREM's dominance of parliament would be the biggest in decades by any party, even though it gathered only about a third of votes in round one. Over half of the electorate did not vote, and many said they saw no purpose in doing so. Thursday's polls show even fewer will turn out in round two. France's two-round voting system, used in all types of elections including the April-May presidential contest that took Macron into power, eliminates low-scoring candidates in the first round.

Both the Opinionway and Harris Interactive surveys showed Republic on the Move and its center-right Modem ally winning between 440 to 470 seats out of a total 577 in the lower house.

If the forecast is borne out, it would complete the 39-year-old centrist's demolition of mainstream parties that dominated French politics for decades. The Opinionway poll projected the conservative The Republicans party and its allies would be the leading opposition grouping with between 70 and 90 seats, while the Socialist Party, in power until last month, would secure just 20 to 30 seats.

The far-right National Front was on course to win between one and five seats, and the hard-left France Unbowed party between five and 15, it forecast. Harris Interactive broadly echoed the trends. Turnout is projected at 46 percent, Opinionway said, lower than in the first round.