1 killed, at least 10 injured after car ploughs into pedestrians outside London mosque 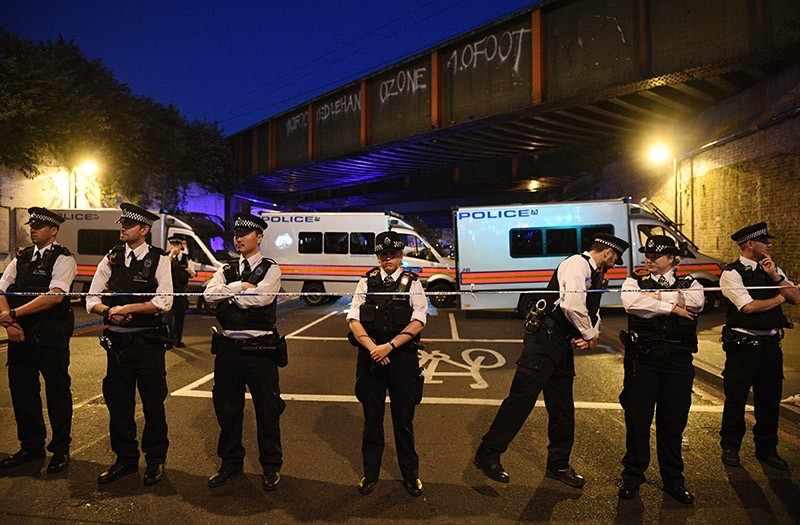 Policemen stand by a police cordon near Finsbury Park, after a van collision incident in north London, Britain, 19 June 2017 (EPA Photo)
by Compiled from Wire Services Jun 19, 2017 12:00 am

One person was killed and 10 others injured early Monday when a vehicle ran down pedestrians near a mosque in the northern area of the city, according to authorities.

The 48-year-old driver of the van was detained by members of the public and then arrested by police.

Muslim leaders said worshippers were specifically targeted after leaving prayers near Finsbury Park mosque in north London shortly after midnight and linked the incident to a recent rise in anti-Muslim hate crime.

Witness Abdiqadir Warra told AFP the van "drove at people" and some of the victims were carried for several metres along the road.

London Mayor Sadiq Khan said it was a "horrific terrorist attack," calling it "deliberate" and aimed at "innocent Londoners, many of whom were finishing prayers during the holy month of Ramadan".

The crash occurred at a time when the multiethnic neighborhood was crowded with Muslims leaving the Finsbury Park mosque after Ramadan prayers. Muslim leaders called it a hate crime and asked the public to stay calm.

Police said the driver was detained by the crowd until police arrived.

The crash occurred shortly after midnight, when police received reports of a collision between a van and pedestrians. Police said eight of the injured were hospitalized; the other two had minor injuries and were treated at the scene.

Eyewitnesses reported seeing police give emergency heart massage to at least one of the injured.

A leader of the Muslim Council of Britain called for extra security at mosques in light of the apparent attack. The group's general secretary, Harun Khan, described the incident as a hate crime against Muslims.

"During the night, ordinary British citizens were set upon while they were going about their lives, completing their night worship," he said. "It appears from eyewitness accounts that the perpetrator was motivated by Islamophobia."

London Mayor Sadiq Khan, the first Muslim to serve in that position, said extra police would be deployed.

London police closed the area to normal traffic. A helicopter circled above the area as a large cordon was established to keep motorists and pedestrians away.

Eyewitnesses told Sky News and other British media that the van seemed to have veered and hit people intentionally.

Mohammed Shafiq of the Ramadhan Foundation, a Muslim organization, said that based on eyewitness reports, it seems to be a "deliberate attack against innocent Muslims."