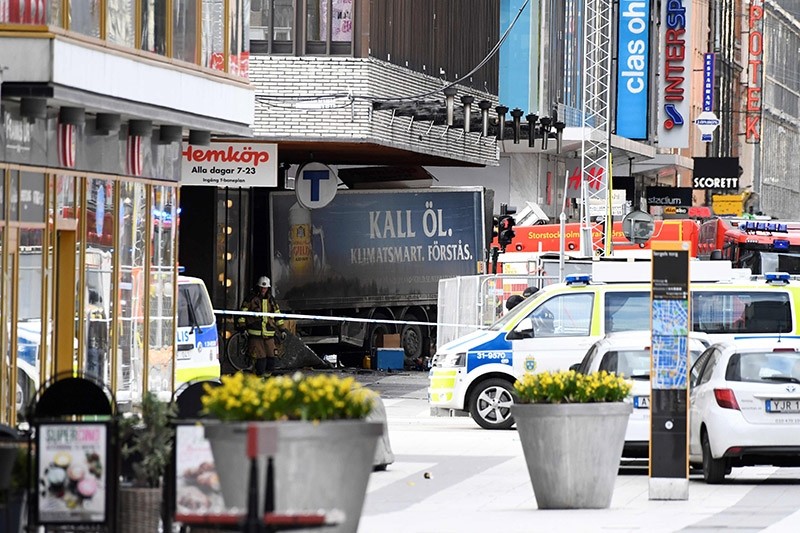 This file photo taken on April 7, 2017 shows emergency services members working at the scene where a truck crashed into the Ahlens department store at Drottninggatan in central Stockholm, April 7, 2017. (AFP Photo)
by Daily Sabah Jun 19, 2017 12:00 am

The number of terror supporters in Sweden has risen from hundreds to thousands over the past seven years, the Swedish security service SÄPO estimated.

In 2010, Swedish security services had identified around 200 supporters of terror groups such as Daesh among the Muslim community, while in 2017 that number has risen to several thousand, according to SÄPO.

SÄPO Director General Anders Thornberg said that the number is "the new normal," blaming Daesh terror group's propaganda and the wars in Iraq and Syria for adding impetus to terrorist recruitment in Sweden.

The terror supporters tend to be concentrated in urban areas such as Stockholm, Gothenburg, Malmö and Örebro.

SÄPO has also seen a three-fold rise in intelligence tip-offs related to terrorism over the last five years, and Thornberg stated that the security service's workload has increased significantly in recent years, with employees working around the clock.

However, the national terror threat level has not been raised since 2010, as SÄPO believes that most individuals with terror sentiments are not planning or intending to carry out an attack.

SÄPO also identified asylum seekers who had been rejected and then evaded authorities as one reason for the increase in the support for terror, with at least 12,000 missing asylum seekers in Sweden alone. SÄPO was notified of 353 asylum seekers who presented a potential security risk in the first four months of 2017, leading to the rejection of 19 of the asylum claims.

Rahmat Akilov, the attacker who killed four on the streets of Stockholm in April, was known to SÄPO before the attack but had not been arrested due to lack of evidence.