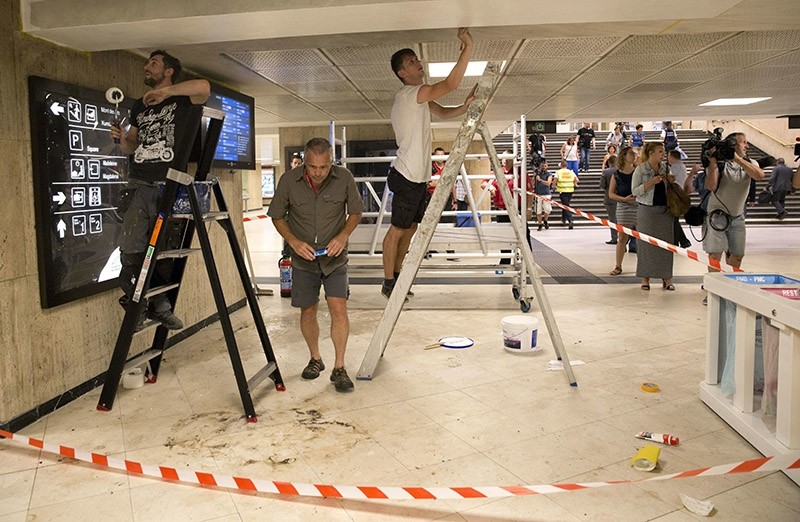 An investigator takes a photo and painters repair an area inside a cordon where an explosive device went off inside Central Station in Brussels on Wednesday, June 21, 2017. (AP Photo)
by Compiled from Wire Services Jun 21, 2017 12:00 am

Belgian security forces have identified a man who set off an explosion at a Brussels train station before he was shot and killed, Interior Minister Jan Jambon said on Wednesday.

"The terrorist's identity is known. We have been able to identify him," Jambon told RTBF television without giving further details.

Jambon said the attack could have been much worse because the "big explosion did not happen," adding more details about the device would be released shortly.

The suspected bomber was a Moroccan national, aged 36, who had no history of being a terrorist suspect, a prosecutor said later on Wednesday.

Eric Van Der Sypt told a news conference that the man's initials were O.Z. and that his home in Brussels' Molenbeek district had been searched. He said the man had not been wearing a suicide belt.

"He was not known to the authorities for any terrorism connection," Van Der Sypt added.

"We consider this a terrorist attack," prosecutor Eric Van Der Sypt told reporters, declining to comment on witness accounts that the man had shouted extremist slogans before detonating what witnesses said were one or two devices in luggage.

Although no one was hurt, billows of smoke pouring through Central Station and memories of Daesh attacks in the city last year, and more recently in Britain, France and elsewhere, sent evening commuters racing for cover.

Central Station re-opened at 0800 (0600 GMT) Wednesday. A police command car and several officers were still at the station, an Associated Press photographer said.

Burn and blood marks remained on the floor at the scene, as workers continued to clean up and paint the area.

The Belgian capital, home to the headquarters of NATO and the European Union, has been on high alert since a Brussels-based Daesh cell organised an attack that killed 130 people in Paris in November 2015. Associates of those attackers killed 32 people in their home city four months later.

Since then, attacks in France, but also in Germany, Sweden and, most recently, in Britain, have been carried out in the name of the Syria-based terror group by other young men, many of them locals, raising fears of more violence in the city.

Security experts said Tuesday's incident could have been similar to "lone-wolf" assaults carried out by individuals with limited access to weapons and training.

With Daesh under pressure in Syria - where Belgium has been the most fertile European recruiting ground for foreign terrorists- he said attacks in Europe could increase, although many would be by "amateurs" doing little harm.

He compared Tuesday's incident to that on Paris' Champs-Elysees avenue a day earlier, when a man was killed when he rammed his car, filled with explosive and weapons, into a French police convoy. No one else was injured.

Rail worker Nicolas Van Herrewegen told Reuters that he was heading downstairs toward the underground platforms that serve long-distance and suburban lines running under the city centre.

"There was a man shouting, and shouting and shouting," he said. "He blew up the little suitcase he had next to him. People just took off."

He described the man as quite dark and with short hair and said he was wearing a white shirt and black jeans.

Remy Bonnaffe, a 23-year-old lawyer who was waiting on the concourse for a train home to Ghent, said he was startled by an explosion as he listened to music on his headphones.

He took a photograph, which he later posted on Twitter, of flames shooting up from what he thought was a briefcase. There was a second blast farther away, which he could not see, followed by what sounded like gunfire, prompting him to run.

"I think we had some luck tonight," he told Reuters. "I'm happy that no one was injured and that this was basically a failed attempt." People just feet from the explosion appeared unhurt and he said he saw no obvious damage to nearby walls.

As Prime Minister Charles Michel consulted his security advisers, the national alert was maintained at its second highest level.

Michel, who convened a National Security Council meeting for 9 a.m. (0700 GMT) on Wednesday, tweeted his thanks to the security forces and railway staff for their professionalism and courage.