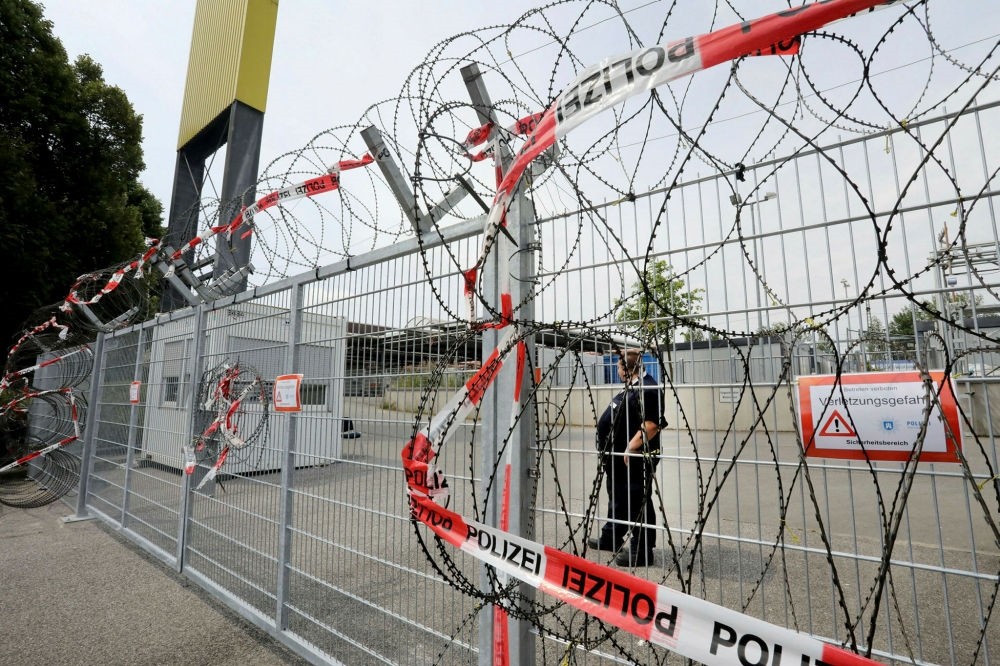 Police razor wire at the entrance of a provisional collection center for arrestees during the G20 summit in Hamburg-Harburg, northern Germany, June 20.
by Daily Sabah with AFP Jun 21, 2017 12:00 am

Left-wing extremists in Germany claimed responsibility for railway arson attacks to sabotage the upcoming G-20 summit. In a letter published on Monday, "This morning we have set fire to the cable harnesses along several main sections of the railway," the group stated. "We are entering into one of the central nervous system of the capitalism," they added.

Several intercity rail tracks in Germany were hit by arson attacks on Monday night. The cable ducts of rail signaling equipment were set on fire in the states of Lower Saxony, Berlin, North Rhine-Westphalia and Saxony, police said.

Similar sabotage action hit Germany in 2011, believed to be carried out by leftist extremists then protesting against the German military's deployment in Afghanistan.

Northern Germany's port city of Hamburg will host a summit of the group of 20 biggest economies on July 7-8, with leaders including U.S. President Donald Trump and Chinese leader Xi Jinping due to attend. Hamburg has increased its security measures in preparation for the upcoming G20 summit as far-left activists have threatened attacks ahead of the summit. The security measure includes border controls, which will be carried out at various locations with temporary flexibility.

For security officials, questions remain over whether protesters or potential terrorists will disrupt the summit. In this respect, the Federal Criminal Police Office (BKA) announced that it was expecting numerous demonstrations across the city. According to German media sources, about 15,000 police officers from across Germany will be recruited for the event in Hamburg.

"We must assume that a considerable amount of people in Hamburg will have the goal of disturbing the event," BKA President Holger Münch told the "Berliner Zeitung" emphasizing that the Hamburg police had prepared its units for possible violent protests. There have also been protests at previous events including the opening of the European Central Bank in Frankfurt in 2015, Münch said, adding that thousands of demonstrators ready for violence were generally expected in such cases.