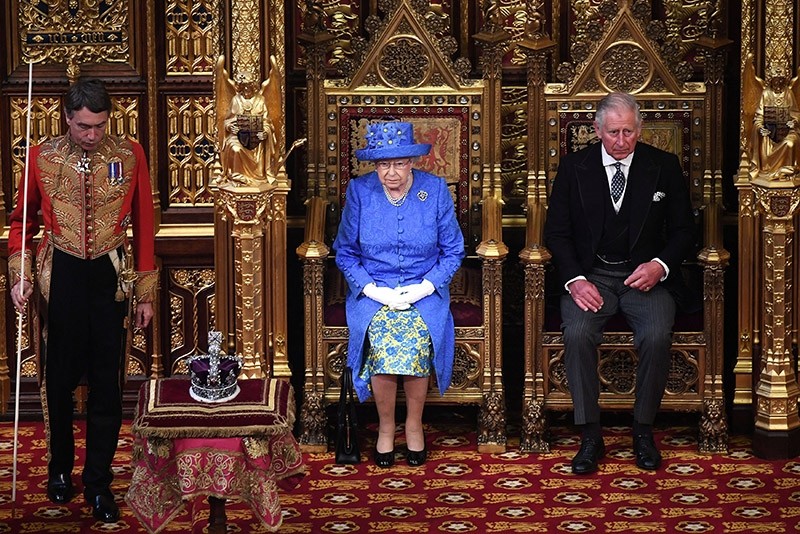 Queen Elizabeth II will outline the government's legislative program Wednesday in Parliament, carrying on with royal duties despite the announcement that her husband, Prince Philip, has been hospitalized.

The 96-year-old Prince Philip was admitted to hospital with an infection , Buckingham Palace said.

"The Duke of Edinburgh was admitted to King Edward VII Hospital in London last night, as a precautionary measure, for treatment of an infection arising from a pre-existing condition," a spokesman for the Palace said.

"Prince Philip is in good spirits and is disappointed to be missing the State Opening of Parliament and Royal Ascot," the spokesman said.

His rare absence from the State Opening of Parliament added to the solemnity of an occasion where Prime Minister Theresa May is presenting a legislative program trimmed down following the loss of her majority.

While the queen reads the Queen's Speech to lawmakers, it is written by the prime minister and her staff.

May, who called a snap election expecting to fatten her party's majority, is promising her minority government will be one "that consults and listens."

"The election result was not the one I hoped for, but this government will respond with humility and resolve to the message the electorate sent," May said in a statement. "We will work hard every day to gain the trust and confidence of the British people, making their priorities our priorities."

May had hoped for an overwhelming election victory that would silence dissenters and give her a mandate to push ahead with plans to leave the European Customs Union and drastically limit immigration as Britain leaves the EU. Instead, she still hasn't secured a deal with another party to insure that the government can deliver on its agenda.

Normally the Queen's Speech repeats key legislative promises made during the election campaign, but May is expected to omit the most controversial items of her election manifesto.

Signaling the importance of Brexit negotiations with the EU, which will last until the spring of 2019, the queen will set out the government's program for two years, rather than one.

The speech is being delivered with less pageantry than normal a result of the timing of the snap election. For instance, the queen will arrive at Parliament in a car, rather than a horse-drawn carriage, and she will deliver the speech in everyday dress, instead of the traditional royal robes.

The primary issue was scheduling. The state opening is taking place only days after another huge annual event, Trooping the Color, a celebration of the Queen's birthday. Both ceremonies take weeks of preparation and planning, and it was deemed too difficult to prepare for two such events so close together.

Elizabeth and Philip, who married at Westminster Abbey in 1947, are due to celebrate their platinum, or 70th, wedding anniversary in November.

Both the queen and Philip have suffered some health issues in recent years.

The queen missed a traditional Christmas church service last year for the first time in decades because of a heavy cold and was hospitalized in March 2013 with symptoms of gastroenteritis .