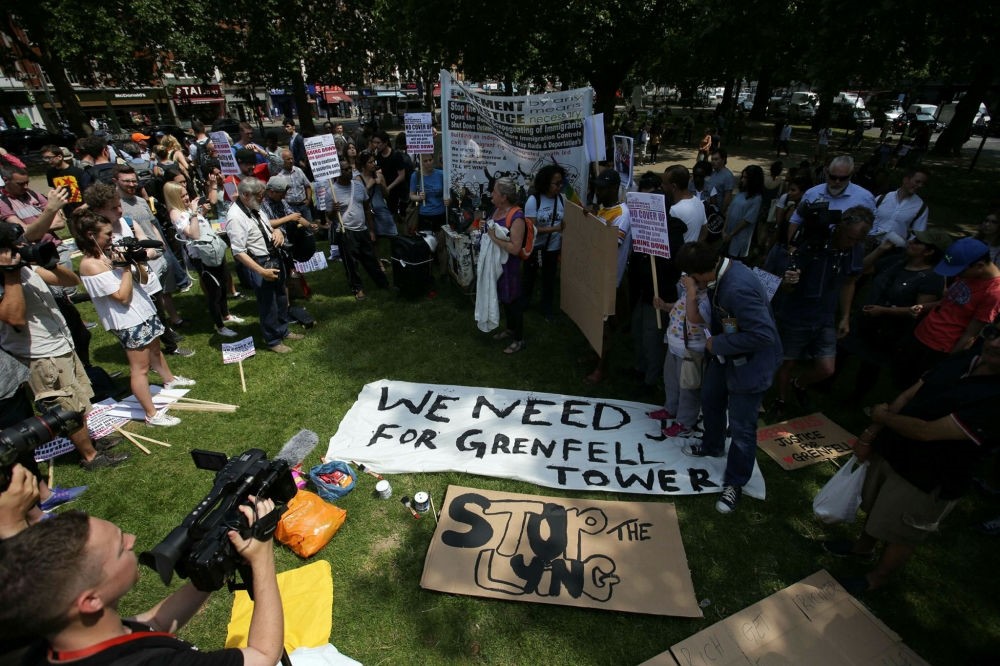 Demonstrators gather in Shepherds Bush in west London to take part in an anti-government protest on June 21.
by French Press Agency - AFP Jun 22, 2017 12:00 am

Far-left protest organizers are being accused of exploiting the Grenfell Tower catastrophe for political purposes, calling for a government shut down and Prime Minister Theresa May's resignation. Organizers of the protest included a man convicted in the assault of then-Conservative Party Chairman Brian Mawhinney in 1995.

Prime Minister May is facing criticism for her response to last week's devastating fire at Grenfell Tower in west London, in the midst of an intense debate over the recent terror attacks in the city now overshadowed by cuts May has made to the police taskforce since her time as home secretary in 2010.

Far-left groups known as the "By All Means Necessary" and "Stand up to Racism," along with the London Socialist Party, will hold protests for much of the day in London, from 11:30 a.m. until around 6:00 p.m. local time. Protests were held at Sheperds Bush Green on Downing Street, where critics called for Prime Minister May to "go." London's Parliament Square also saw a number of naysayers standing to "protest the Queen's speech."

One far-left group blamed the "government" and "capitalism" for the Greenfell Tower disaster, posting on Facebook: "There will be no peace until this government is brought down."

The protests include calls for those who survived the blaze to be granted permanent residency status in the U.K. Labour Party leader Jeremy Corbyn went as far as proposing the seizure of private property from British citizens in order to house the homeless in Kensington and Chelsea.

"We cannot emphasize enough how vehemently opposed to this many of the affected residents we've spoken to are. They do not want their grief exploited for violent or destructive means," a spokesman for the charity organization said.

Age U.K., a charity for the elderly, as well as The Love Golborne Community on their website have also criticized the "Day of Rage" protests, saying the Grenfell Tower residents are "entirely opposed" to the outcry and do not want their grief exploited."

"My government's priority is to secure the best possible deal as the country leaves the EU," the queen said during her speech, referring to the Brexit deal which will be debated in the elected lower house, the Commons, and the unelected upper house, the Lords.

The speech outlined plans for what the government has called the "Great Repeal Bill" which would incorporate EU law into British law after the U.K. leaves the EU, providing "certainty for individuals and businesses."

"This will be complemented by legislation to ensure that the U.K. emerges from Brexit in success, establishing new national policies on immigration, international sanctions, nuclear safeguards, agriculture and fisheries," Queen Elizabeth II said.

The queen went on to say that Prime Minister May's government will "seek to maintain a deep and special partnership with European allies and to forge new trading relationships across the globe."

May has come under pressure from the opposition and Conservative lawmakers since the disappointing snap election on June 8 when she lost her majority in parliament, forcing May to rely on support from Northern Ireland's Democratic Unionist Party (DUP).

The DUP won 10 seats in the election, enough to provide May, whose conservatives won 318 seats, with a thin majority in the 650-seat parliament.