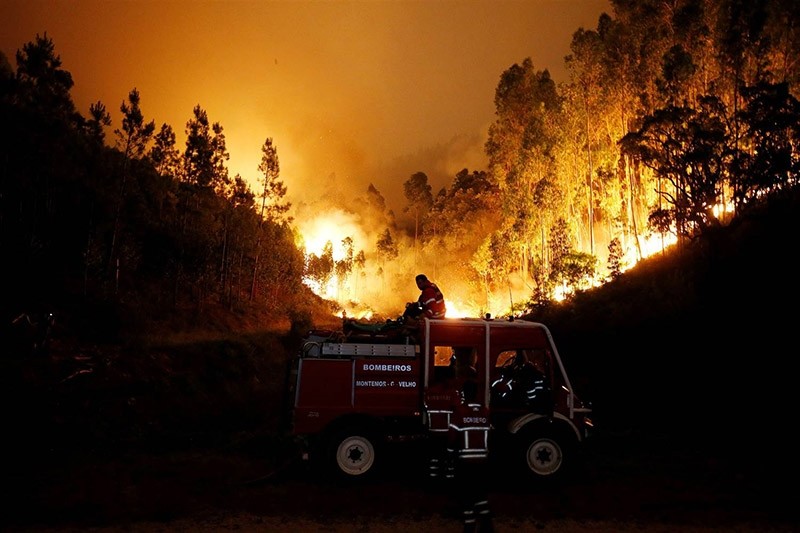 Firefighters work to put out a forest fire near Bouca, in central Portugal. (Reuters Photo)
by French Press Agency - AFP
Jun 22, 2017 12:00 am

The main forest fires raging in Portugal since the weekend, which have killed more than 60 people, were brought under control on Thursday, the civil protection agency said.

The giant blaze broke out initially at Pedrogao Grande and spread to adjacent areas including Gois, Pampilhosa da Serra and Arganil.

The fire in Pedrogao Grande, which ravaged 30,000 hectares (74,000 acres) of forests, was doused only late Wednesday as fire fighters contended with searing heat as well as rapidly shifting winds.

"Higher humidity levels and lower temperatures allowed the firefighters to contain the fire and extinguish the remaining hotspots which had briefly broken out," Antonio Ribeiro, who led the Pedrogao operations, said Thursday.

The blaze in Gois, the second biggest after Pedrogao Grande, was brought "under control" on Thursday, said Carlos Tavares, the civil protection official leading the operations, though he cautioned that some fires could resume.

Tavares said the fire in Gois had affected 20,000 hectares. The firefighting effort involves nearly 2,400 firemen and water-bombing planes, including aircraft sent from Spain, France and Italy.

In both areas, temperatures were expected to fall after several days of intense heat, reaching 29 degrees Celsius (84 Fahrenheit), while in the rest of Portugal temperatures were forecast to top out at 34 Celsius.

Over the weekend, Portugal had sweltered under temperatures over 40 degrees Celsius in several regions.

An estimated 204 people were injured during the fires, and funerals began Wednesday for the 64 people killed.

Press reports have suggested that Portugal's fire plan had not been revised for four years and that the intense heat might have made some communication antennae malfunction.

But the president of the League of Firefighters, Jaime Marta Soares, said Wednesday that he believed arson had caused the fire, contradicting an earlier account by police.

On Sunday, police chief Almeida Rodrigues had ruled out arson, blaming dry thunderstorms for the blaze after saying they had found a tree hit by lightning.

But Marta Soares told local news media the fire had already been burning for two hours before the storm started Saturday.

"I believe, until there is evidence to the contrary... that the fire was of criminal origin," he said.

Reacting to the claims, the president of the parliament Eduardo Ferro said the country "needs clear answers to legitimate doubts."

Questions also remain over how so many people could have died, most of them perishing on a single road that locals say should have been sealed off by first responders.

"My nephew died, a fireman" said Joaquim Serra da Fonseca, 68, in Castanheira de Pera, which sits along the N236 national road that has since been dubbed the "road of death".

As news of the fire spread on Saturday, his 40-year-old nephew and several colleagues rushed down the road to help.

Faced with the fury of the fire, they turned back but in the thick smoke, they apparently crashed into a car full of people, Serra da Fonseca said, and were caught by the flames as they tried to help the passengers.

Serra da Fonseca wondered why they were allowed to take the road when police knew that a fire was raging in the area.