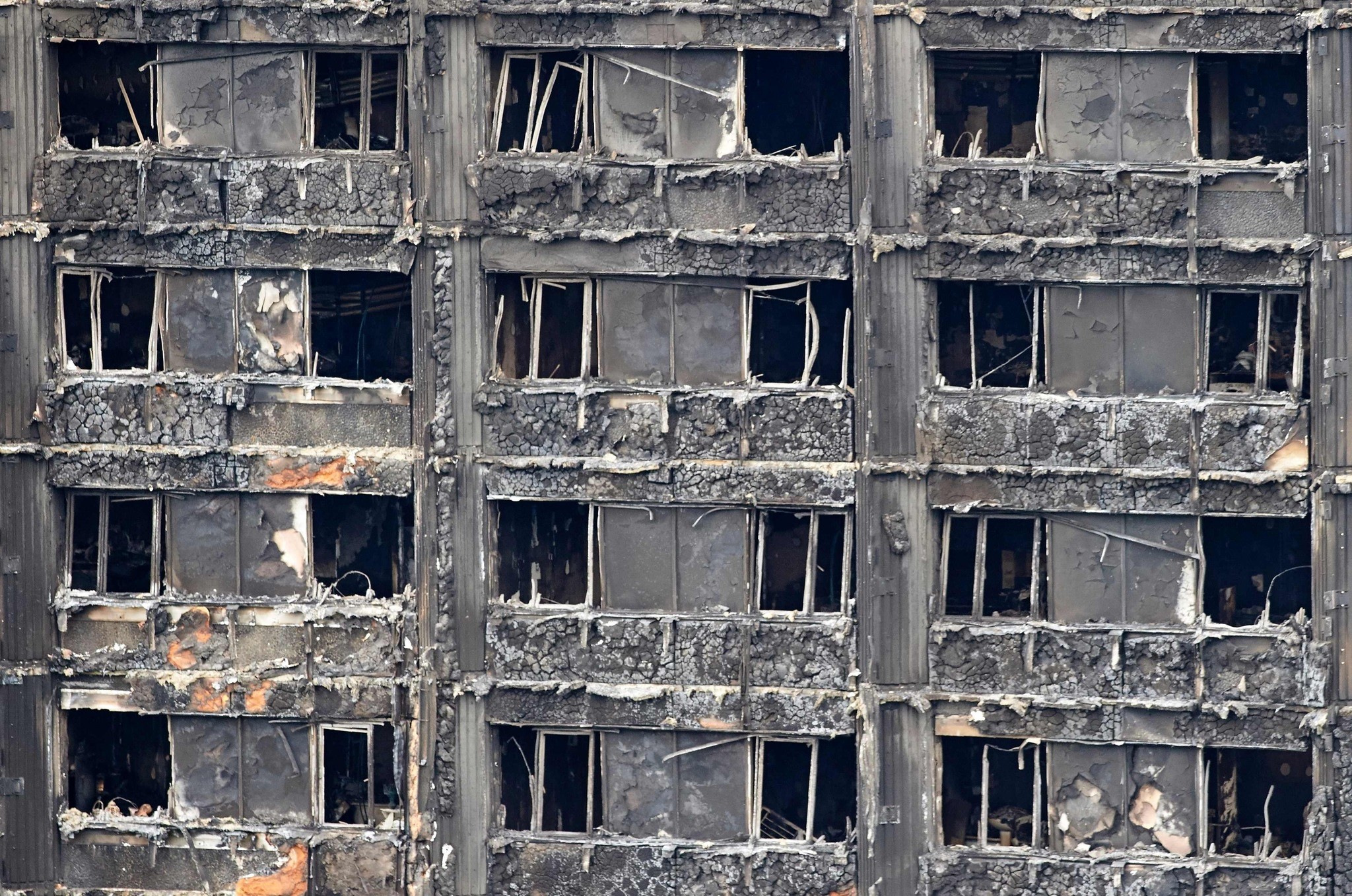 The charred remains of clading are pictured on the outer walls of the burnt out shell of the Grenfell Tower block in north Kensington, west London on June 22, 2017. (AFP Photo)
by Associated Press Jun 22, 2017 12:00 am

Tests so far have found that at least seven high-rise apartment buildings in England have combustible external panels like the ones believed to have contributed to a fire that killed 79 people in London, Prime Minister Theresa May's office said Thursday.

Downing Street said 600 buildings in the country have "similar cladding" to that of Grenfell Tower in North Kensington, which was destroyed by the June 14 blaze.

The Department for Communities and Local Government later said that figure refers to buildings with all types of cladding and that not all of them necessarily have cladding made from the same aluminum composite material as Grenfell Tower. Landlords are being asked to check what the cladding on their buildings is made from.

The tests are being urgently conducted as authorities try to determine whether cladding contributed to the rapid spread of the Grenfell Tower blaze, which engulfed the 24-story building in less than an hour. They still haven't said where and how the fire started.

May told the House of Commons on Thursday that government facilities have found combustible cladding after local officials submitted samples in the wake of the fire.

"The relevant local authorities and local fire services have been informed, and, as I speak, they are taking all possible steps to ensure buildings are safe and to inform affected residents," May said.

May encouraged the owners of both public and private tower blocks around the country to quickly forward samples of any similar material for testing. The government will work with local authorities to make sure any dangerous material is removed and residents are safe, she said.

The Department for Communities and Local Government said it would not identify the buildings with combustible panels until landlords have had the opportunity to inform tenants.

The local council in Camden, a borough of London, removed cladding from one of its buildings for further testing after initial tests showed some panels were "not to the standard that we had commissioned."

It was unclear whether the Camden example was one of the seven mentioned by the government.

However, the company that fitted the cladding to the Camden property towers oversaw the refurbishment of Grenfell Tower, a document posted on its website shows.

Rydon carried out the refit of the high-rises between May 2006 and October 2009, Britain's Press Association reported.

The company did not immediately respond to a request for comment by The Associated Press.

In another area of north London, Tottenham, residents at the Rivers Apartments came home to notices advising them that experts were "carrying out an immediate review of the exterior cladding."

Newlon, a nonprofit that manages the complex and others in London, said fire officials "made some straightforward recommendations for the building, which we have already started work on." It said the fire officials "were satisfied that Rivers Apartments is considered a low fire risk building."

Opposition leader Jeremy Corbyn called for urgent checks on around 4,000 buildings as Britain comes to grips with the potential ramifications of the disaster. Thousands need urgent assurances about their own safety, he said.

"At least 79 people are dead — it is both a tragedy and an outrage because every single one of those deaths could and should have been avoided," Corbyn said.

Corbyn compared the tragedy to the 1989 Hillsborough disaster in which 96 people were killed in the crush of a crowded soccer stadium, and recent sexual abuse scandals involving vulnerable children, arguing that the government had long turned a blind eye to the needs of the poor.

"The pattern is consistent: Working-class people's voices are ignored, their concerns dismissed by those in power," he said.

May has apologized for mistakes that were made in the aftermath of the Grenfell Tower tragedy and promised that "no stone will be left unturned" in a public inquiry into its causes.

"For any guilty parties there will be nowhere to hide," she said.

May's comments came after the resignation of the top administrative official in the local government that serves the community devastated by the fire. Local residents and the central government have criticized the response to the tragedy.

Nicholas Holgate, chief executive of the Kensington and Chelsea council, came under intense pressure following last week's blaze. The first few days after the fire were marked by chaos on the ground as local authorities struggled to deal with the hundreds of people who were displaced.

Survivors who had lost everything found it hard to get information about missing loved ones or the services available to help them get back on their feet.