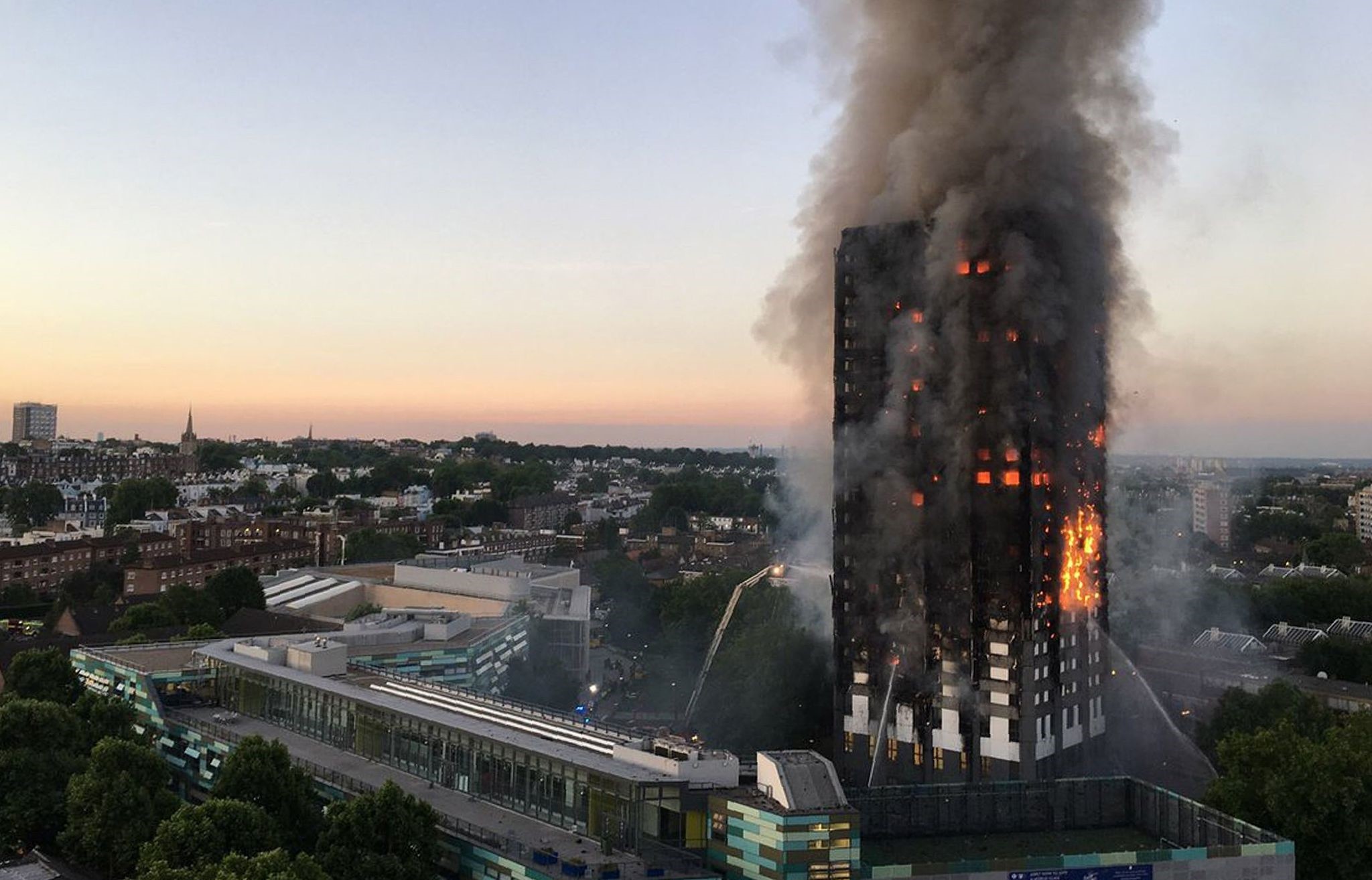 This handout image received by local resident Natalie Oxford early on June 14, 2017 shows flames and smoke coming from a 27-storey block of flats after a fire broke out in west London. (AFP Photo)
by reuters Jun 23, 2017 12:00 am

A fire that killed at least 79 people at a London apartment block started in a fridge freezer, and the outside cladding engulfed by the blaze has since been shown to fail all safety tests, London police said on Friday.

Investigators said they would consider bringing manslaughter charges over the disaster and had already seized material from a number of undisclosed organizations.

Detective Superintendent Fiona McCormack said experts had now concluded the fire, the mostly deadly blaze in London since World War Two, had started in a Hotpoint fridge freezer, model FF175BP, which had not been subject to any recall.

The blaze has provoked anger and heaped pressure on Prime Minister Theresa May, who is fighting for her political survival after her party lost its parliamentary majority in a snap election at a time when Britain is beginning divorce talks with the European Union.

The speed at which the fire engulfed the 24-story Grenfell Tower raised questions about the external cladding on the block.

Asked if the insulation and aluminum tiles used were acceptable for such buildings, McCormack told reporters: "No they're not.

"All I can say at the moment is they don't pass any of the safety tests. So that will form part of what is a manslaughter investigation."

Britain ordered an immediate technical examination of the Hotpoint fridge model to establish whether further action should be taken, but said there was no need for owners to switch off their appliances.

"We are working with the authorities to obtain access to the appliance so that we can assist with the ongoing investigations," said Whirlpool Corp, the world's largest maker of home appliances which owns the Hotpoint brand in the Europe and Asia Pacific regions.

"Words cannot express our sorrow at this terrible tragedy," Whirpool said in a statement.

The company said 64,000 such fridge freezers were made by Indesit between 2006 and 2009 when the model was discontinued, some years before Whirlpool acquired Indesit.

The fire has acted as a focal point for anger at local authority funding cuts and, if more buildings are deemed unsafe, the government faces the task of re-housing people within existing social housing facilities which are stretched.

The government said it was urgently conducting tests on some 600 high-rise buildings in England which have exterior cladding, often added to insulate them or improve the external appearance of aging blocks. Some councils have begun removing the panels.

Grenfell Tower, in north Kensington, west London, had undergone an 8.7 million pound ($11 million) refurbishment which was completed in 2016, but residents of the more than 120 apartments had complained about its fire safety.

McCormack said the police investigation would look at the entire facade of the building, how the building was constructed and the refurbishment work. She said it would examine all aspects of the cladding: the aluminum tiles, the insulation behind it, how it was fitted to building and the installation.

As well as possible manslaughter, police will consider health and safety offenses and breaches of other building regulations. McCormack said all companies involved in the building and refurbishment of the building would be reviewed.

In addition to the criminal investigation, police and firefighters are continuing painstaking efforts to locate the victims. So far only nine people have been formally identified and police say the remains of some might never be found, the blaze having been so fierce.

Some locals believe the official number of those dead or missing presumed dead is lower than the true figure, and McCormack acknowledged they might not know everyone who was in the building as some people might fear coming forward because they were in the country illegally.

She said the government had given assurances they were not interested in anyone's immigration status.

"I remain really concerned though that we do not have a complete picture," she said. "I fear that there are more."