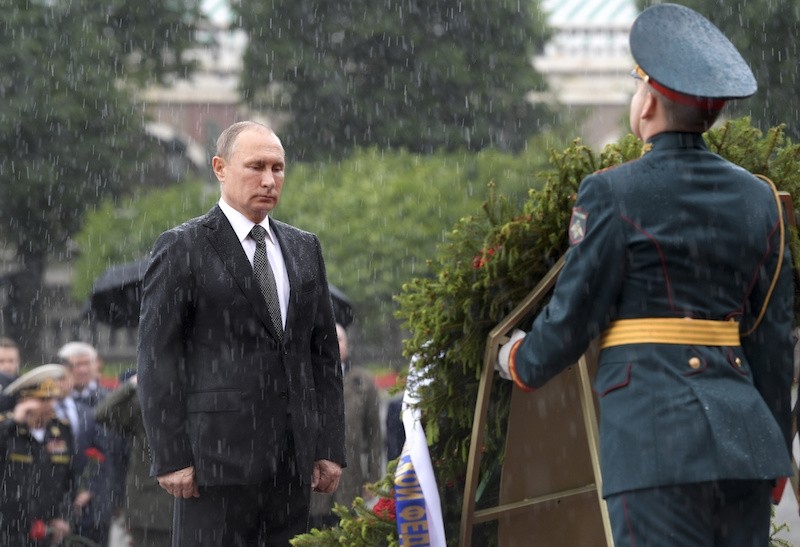 Ignoring the torrential rain, Russian President Vladimir Putin remained standing with a firm expression at the Tomb of the Unknown Soldier in Moscow Thursday.

While other officials had apparently seen the weather forecast and brought their own umbrellas, Putin chose to bear the rain without shelter.

Thursday marked the Day of Memory and Sorrow, commemorating the date when the Nazis launched Operation Barbarossa by invading Russia on 22 June 1941.

The ceremony involved Putin, Prime Minister Dmitry Medvedev and other high-ranking officials placing wreaths at the Tomb of the Unknown Soldier, located on an outer wall of the Kremlin.

He and Medvedev were eventually brought umbrellas once the wreath-laying ceremony was finished, at which time a military parade was passing the Kremlin.

Hitler's surprise attack on Russia went against the Molotov-Ribbentrop Pact of 1939, in which the countries had agreed to separate spheres of influence in Eastern Europe in return for remaining neutral towards each other.

It took three years for the Nazis to retreat at the Battle of Kursk in 1943, with more German defeats at Leningrad and Minsk in 1944, after which Russian forces reached the Polish border.

The Nazi invasion of Russia cost around 26 million lives, 17 million of which were civilians who mostly starved to death.