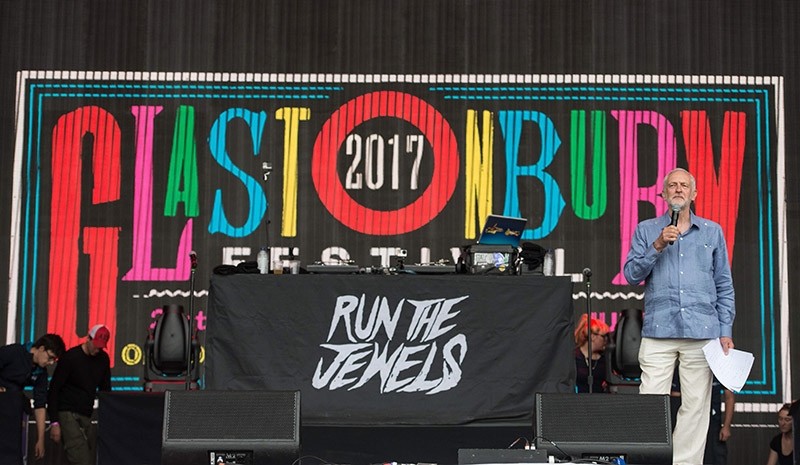 Britain's opposition Labour party Leader Jeremy Corbyn addresses the crowd at the Glastonbury Festival of Music and Performing Arts on Worthy Farm near the village of Pilton in Somerset, south-west England on June 24, 2017. (AFP Photo)
by Compiled from Wire Services Jun 24, 2017 12:00 am

Corbyn, 68, received a rock star welcome from thousands of festival-goers, who chanted his name and held up signs that read "I love Jeremy Corbyn" as he took to the festival's main stage. Corbyn gave a wide-ranging speech on women's rights, Brexit, global warming and London's Grenfell Tower fire tragedy.

Even before his arrival, music fans at the festival were singing "Oh, Jeremy Corbyn" to the tune of "Seven Nation Army."

As he did during the election campaign, Corbyn also quoted a poem by 19th-century British revolutionary poet Percy Bysshe Shelley saying: "Rise, like lions after slumber... In unvanquishable number".

The politician, who is popular with Britain's young voters, was set to introduce U.S. hip hop duo Run The Jewels.

Prime Minister Theresa May's Conservatives lost their parliamentary majority in the June 8 election, while Labour came second but made major gains -- partly thanks to young voters enthused by the Labour leader.

Corbyn said young people were getting involved in politics for the first time "because they were fed up with being told they don't matter and that their generation was going to pay more to get less".

Corbyn describes Labour is now a "government in waiting" and has said he will push for new elections.

May faces a crucial test in a confidence vote in parliament next week on her legislative program and will be forced to resign if she loses it.