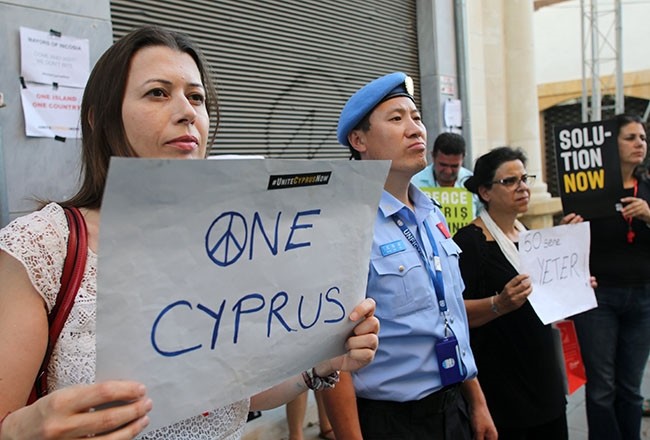 "It's a unique opportunity, because after all of these decades of division it is possible, it is possible to solve, and I really hope that this is the spirit by which everybody goes into this meeting," Eide told reporters in Geneva.

Espen Barth Eide told a news conference Tuesday that both sides have rejected a U.N. document intended to steer talks at the Swiss resort of Crans-Montana.

In the absence of such a document, Eide said the onus is on the leaders to seize the "best chance" at solving the decades-old problem.

His comments came as rival Cypriot leaders were headed to Switzerland for a make-or-break summit aiming to seal a long-elusive peace deal for their divided island.

President Nicos Anastasiades, the Greek Cypriot leader, and his Turkish Cypriot counterpart Mustafa Akıncı are to resume the U.N.-led reunification talks on Wednesday.

They will be joined initially at least by the foreign ministers from the so-called guarantor powers of Cyprus -- Greece, Turkey and Britain -- along with EU foreign policy chief Federica Mogherini.

But a positive outcome is far from certain.

U.N.-backed peace talks held in Geneva in January failed to make any headway, and Eide himself warned that "it is not going to be easy and there is no guarantee of success".

"This is work in progress, and it is hard work. There will be long days and hard work ahead," he said.

The Cyprus talks moved to Switzerland after negotiations on the island hit a dead end more than two years into the U.N.-brokered process.

The summit, which gets underway Wednesday, will concentrate on how security will be handled if there is a deal on reunifying the island as a federation. Other key, unresolved issues will be discussed concurrently.

Unlocking security would allow Anastasiades and Akıncı to make concessions on other core issues.

But Eide warned that the two sides remained "diametrically opposed" on the that point.

Anastasiades's government, backed by Athens, is pressing to abolish the intervention rights and for Turkish troops to withdraw from the island on a specific timeline.

On the other side, the Turkish Cypriots and Ankara will argue to retain some form of intervention rights and a reduced number of troops remaining in the north.

But Eide hailed that sides were "basically done" on four other chapters being discussed, revolving around governance and power-sharing, property, economy and EU matters.

And he stressed that they had made "unprecedented progress" on the sticky issue of territory, when the two leaders in January exchanged largely overlapping maps of their vision for the former British colony.

"My preference is to talk about this as the best chance... It will be extremely sad if it is wasted," he said.