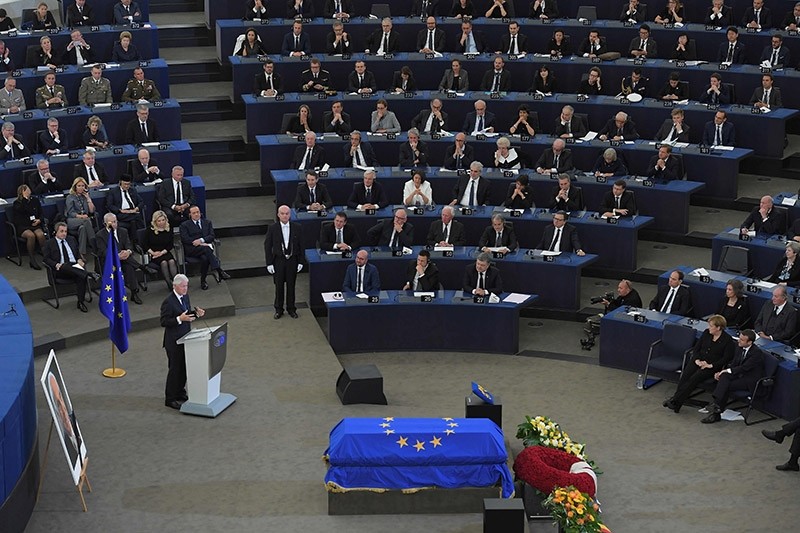 Former US President Bill Clinton (L) delivers a speech during a ceremony for late German Chancellor Helmut Kohl at the European Parliament in Strasbourg, eastern France, on July 1, 2017. (AFP Photo)
by Compiled from Wire Services Jul 01, 2017 12:00 am

Around 20 political leaders from around Europe and former U.S. President Bill Clinton joined mourners at a ceremony in Strasbourg Saturday to pay hommage to the late German chancellor Helmut Kohl at the European Parliament.

Kohl died on June 16 at age 87 and his coffin draped with the flag of the European Union was placed in the chamber of the EU legislature in tribute to the leader known as the father of German reunification.

Serving as chancellor from 1982 to 1998, Kohl was also an architect of the expansion of the EU.

"Helmut Kohl was a true European and a friend. Europe owes him a lot," European Commission president Jean-Claude Juncker, the only current leader in Europe to have worked alongside him.

Kohl's "legacy in Europe is enormous," he said, adding he was speaking primarily as a friend of the German political giant.

"Helmut Kohl gave us the chance to be involved in something bigger than ourselves," former U.S. President Bill Clinton said, citing Kohl's willingness to put international cooperation before national interests.

EU Parliament President Antonio Tajani said Kohl deserved "a place of honor in the European pantheon" for unhesitatingly extending the hand of friendship to fledgling democracies in Eastern Europe following the fall of the Iron Curtain.

Following the ceremony in Strasbourg, which was attended by over 800 guests, Kohl's coffin was to be taken to the German city of Speyer for a requiem Mass and military honors.