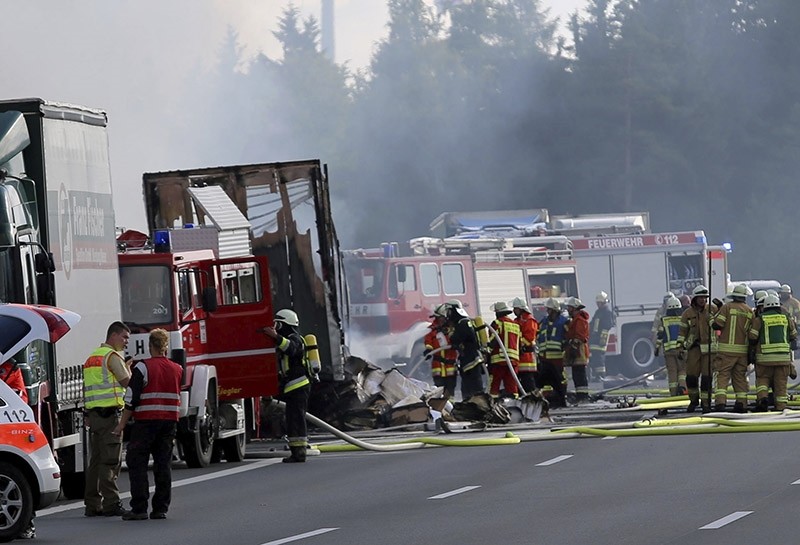 Rescue workers stand beside burnt-out coach on the motorway A9 near Muenchberg, southeastern Germany, Monday, July 3, 2017 after a bus crashed into a truck and caught fire. (AP Photo)
by Compiled from Wire Services Jul 03, 2017 12:00 am

Bavarian police have confirmed that all 18 people missing in the bus crash on a highway in southern Germany are dead.

Another 30 people were injured when the bus carrying a group of German senior citizens crashed into a truck on the A9 highway in Bavaria early Monday and burst into flames. Two of the injured are still in life-threatening condition.

Police also tweeted that the members of the group were between 41 and 81 years old and mostly from Saxony in eastern Germany. Two drivers and 46 passengers were on the bus.

The accident took place around 7 a.m. when the bus rear-ended a trailer-truck at the end of a traffic jam on the A9 highway near Muenchberg in Bavaria.

Some 200 emergency crews were at the scene and helicopters whisked away the injured to nearby hospitals. Simple wooden coffins were wheeled in for the remains recovered from the blackened, twisted wreckage of the bus.

The flames that engulfed the bus "were so strong that only steel parts are still recognizable on the bus, and from that you can understand what it means for the people on this bus," Transport Minister Alexander Dobrindt said, adding that the remains of "11 people have been recovered" so far.

"Our thoughts are with the families of the victims and we wish all those who were injured a speedy recovery," she said.

The bus carrying 46 passengers and two drivers rammed into the trailer in a traffic jam on the motorway A9 close to the Bavarian town of Stammbach.

The crash shortly after 7 am (0500 GMT) sent the bus up in flames, with television images showing only the charred skeleton of the vehicle remaining.

The bus was carrying a tour group from eastern Germany's Saxony state, police said, and it was bound for Nuremberg, according to Bild newspaper.

The accident struck near the southern town Bayreuth, best known for the opera festival that draws thousands of classical music lovers every summer.

If those missing are confirmed killed, the accident at the start of the summer holiday season would be one of the worst to hit Germany.

Among the deadliest in recent years was a collision in June 2007, when 13 people were killed as their tour bus drove off the road and plunged several metres down a slope in eastern Germany's Saxony-Anhalt state.

In September 1992, 21 people died when a bus swerved out of its lane and struck a truck before ramming into the road divider in the southern Black Forest region, a key tourist destination.

Across Europe, the last such fatal accident struck on January 21 in Italy, when an accident involving a Hungarian bus carrying teenagers left 16 dead.

In France, a head-on crash in October 2015 between a truck and a bus carrying pensioners claimed 43 lives as both vehicles burst into flames.