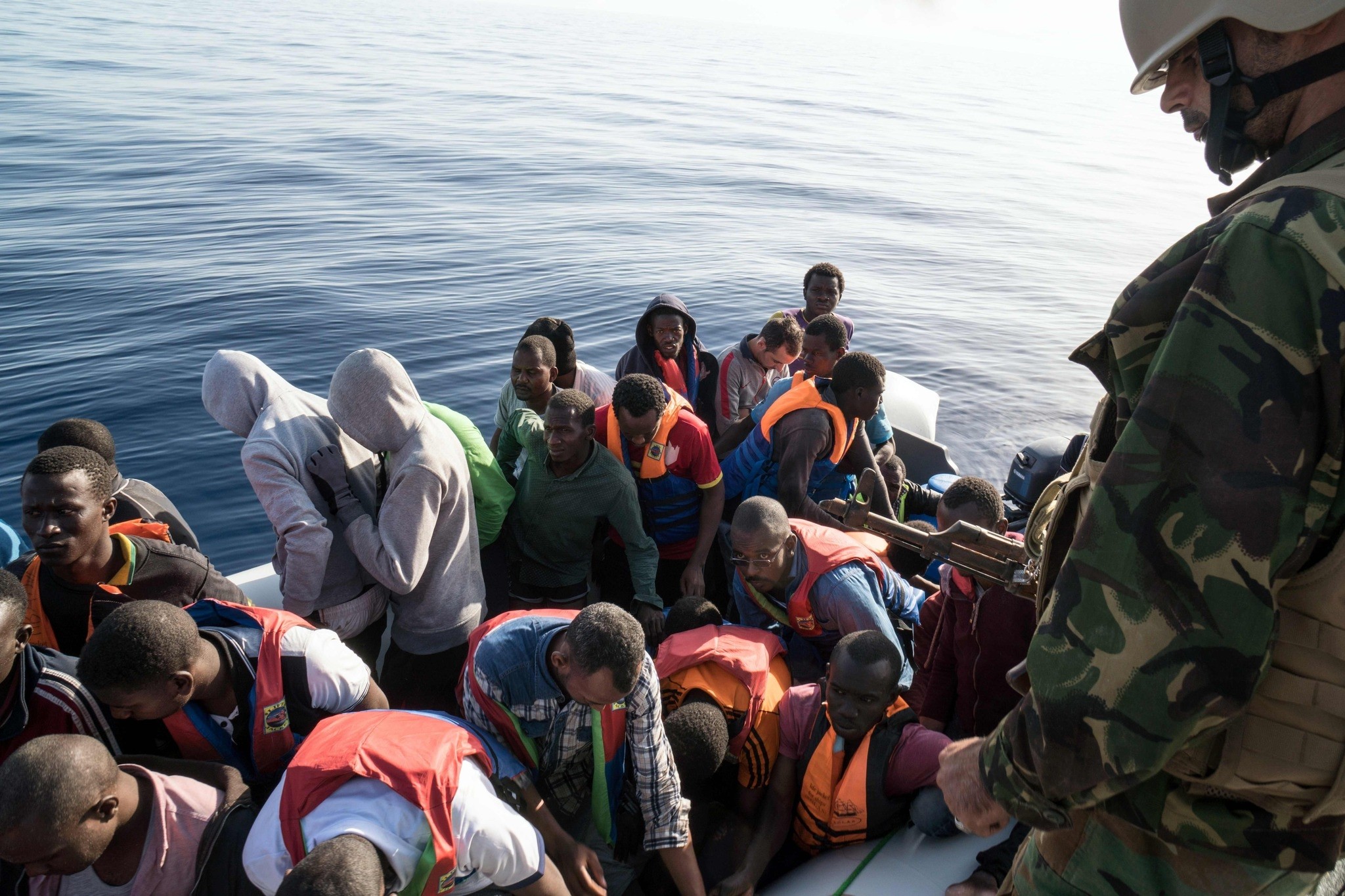 A Libyan coast guardsman watches over during an operation to rescue illegal immigrants who attempted to reach Europe off the coastal town of Zawiyah, 45 kilometres west of the capital Tripoli, on June 27, 2017. (AFP Photo)
by Associated Press Jul 03, 2017 12:00 am

France, Germany and the European Union pledged more money Monday for Libya's coast guard and more support for Italy to cope with a surge of migrant arrivals from Africa.

The U.N. refugee agency, meanwhile, reported that more and more people lured to Libya with the hope of finding jobs there end up trying to reach Europe.

The intensified European effort comes after the U.N. High Commissioner for Refugees, Filippo Grandi, on Saturday decried an "unfolding tragedy" in Italy over the weekend with 12,600 migrants and refugees pouring onto its shores. Grandi noted that more than 2,000 people have lost their lives on the Libya-to-Italy sea route this year.

Officials appeared to be bracing for prospects of an accelerated flow of migrants as the Mediterranean weather warms, making often-perilous maritime journeys more attractive.

"We are only at the beginning of the summer, and without swift collective action, we can only expect more tragedies at sea," Grandi, who is Italian, said in a statement. Like many others in his office in recent months, Grandi repeated calls for an "urgent distribution system" for incoming migrants and refugees, and "additional legal pathways to admission."

On Monday, the EU migration commissioner and the German, French and Italian interior ministers promised extra money and training for the Libyan coast guard and efforts to reinforce Libya's largely lawless southern border that people smugglers exploit. No further details, including how much more money was pledged, were immediately provided.

The officials held a crisis meeting in Paris on Sunday after Italy pleaded for European help amid the surge.

Grandi's office said Monday that people smuggling and migrant flows in Libya were on the rise, and predicted Europe could face a greater influx in the future. UNHCR said patterns of movement through Libya have been changing, as organized crime rings have become internationalized and "trafficking for sexual exploitation" appears to be increasing.

A UNHCR-commissioned report released Monday found "about half of people who travel to Libya do so believing they can find jobs there, but end up fleeing onwards to Europe to escape life-threatening insecurity, instability, difficult economic conditions plus widespread exploitation and abuse," a news release said.

UNHCR says 84,830 migrants and refugees have reached Italy's shores so far this year from Libya, a 19-percent increase from a year earlier. Seven in 10 are economic migrants and the rest are "people in need of protection" like refugees and asylum-seekers.

Italian Prime Minister Paolo Gentiloni's center-left government has stepped up pressure on fellow EU nations to convince them to take in some of the hundreds of thousands of migrants rescued in the Mediterranean and brought to Italy in recent years.

Gentiloni said Monday that unless other EU countries assume some of the migrant crisis burden, the huge numbers could fuel hostility in Italian society.

"Italy has mobilized to deal with the flows of migrants," he said, adding that Europe must help if it "wants to stay faithful to its own principles, own history, own civilization."

On Sunday, unidentified assailants hurled two incendiary devices at a hotel designed to host migrants near the northern Italian city of Brescia, authorities said Monday. Officials were investigating the attack on the Hotel Eureka, which sustained scant damage and has been vacant for years.

Mayor Giuseppe Lancini of Vobarno, a town northeast of Brescia, said interior ministry officials had told him last week the hotel would host 35 asylum-seekers, and that locals opposed the decision.