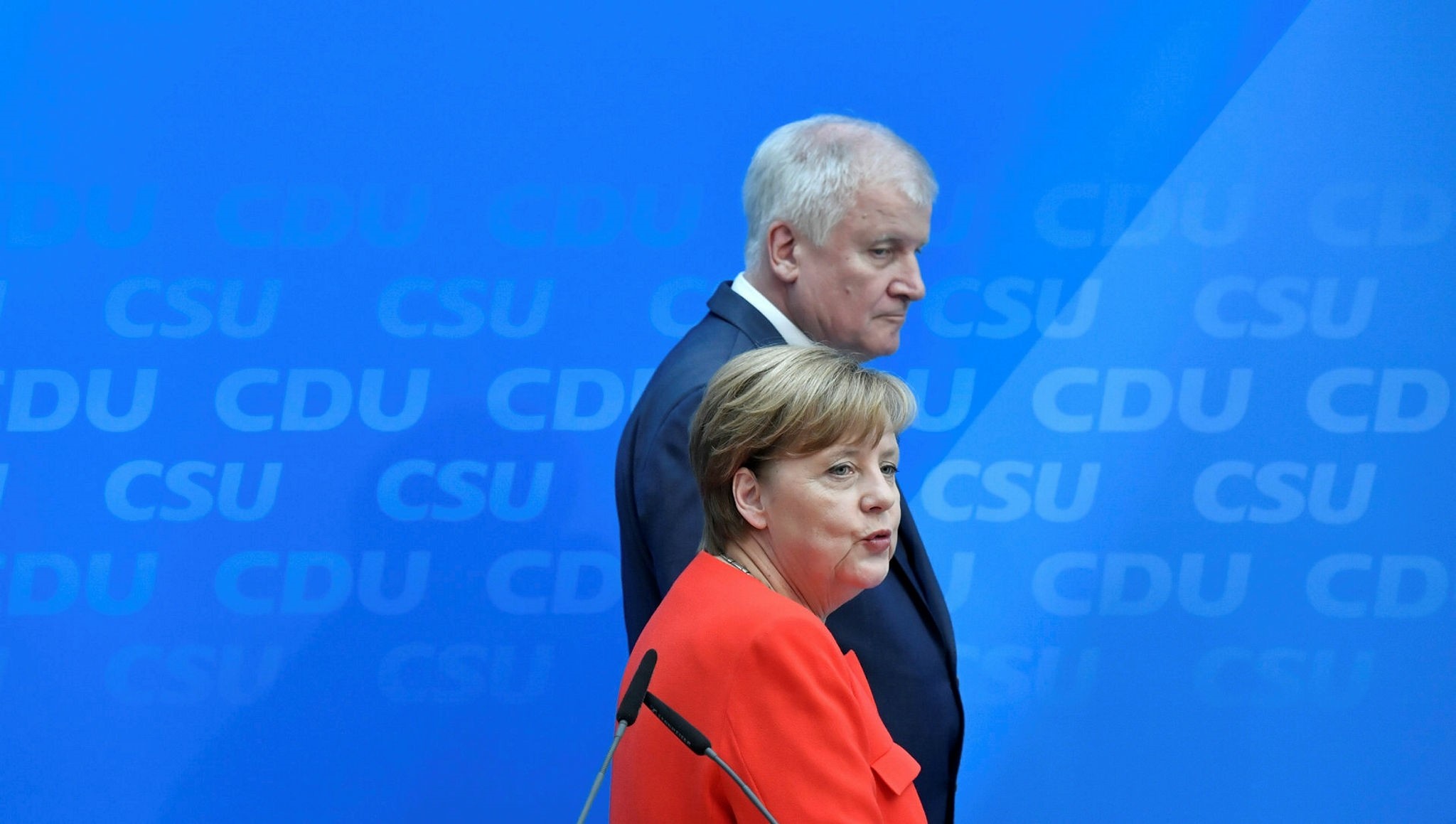 German Chancellor and head of the Christian Democrats party, Angela Merkel and Horst Seehofer, leader of Bavarian sister Party CSU, give a press conference on July 3, 2017 in Berlin (AFP Photo)
by Daily Sabah with Wires Jul 03, 2017 12:00 am

German Chancellor Angela Merkel's conservative Christian Democrats (CDU) and their Bavarian sister party the Christian Social Union (CSU) revealed their party program on Monday, in which they rejected Turkey's full accession to the European Union, while also abstaining from calling the United States a "friend."

On foreign policy, the parties backed a 'Marshall Plan'-style aid effort for Africa, and development aid spending to be increased in a 1:1 ratio with the defense budget. The conservatives also said they rejected Turkey's full EU membership, and also dropped the term "friend" in describing their relationship with the United States.

Diplomatic relations between Turkey and Germany have been rather tense lately, with German troops being withdrawn from Turkey's Incirlik Air Base and Germany's tolerant stance towards several terrorist groups operating within and outside Turkey.

Even German Foreign Minister Sigmar Gabriel has admitted Germany's failures in combating propaganda activities of the PKK terror group in the European country.

"I think Turkey is right when it warns us and says we should not allow the PKK to carry out propaganda activities in public," Gabriel told reporters in a news conference at the Foreign Ministry last Friday.

"I also think that it is unacceptable to ban public appearances of Turkish politicians, but at the same time [we] allow posters of Mr. Öcalan," he said, referring to rallies of PKK followers in Germany, in which they use flags of the PKK and PYD terrorist groups and its so-called chief, Abdullah Öcalan.

Germany outlawed the PKK in 1993, but authorities have been reluctant to take strong measures against the propaganda, funding and recruitment activities of the group, which is also listed as a terrorist organization by the EU and the U.S.

Berlin's reluctance in combating PKK activities in the country has been the source of major dispute between Turkey and Germany, and the issue was recently raised by President Recep Tayyip Erdoğan during his meeting with Gabriel in Ankara early this month.

German courts opened more than 4,000 cases against PKK suspects since 1993, but German authorities often turned down extradition demands by Ankara.

Germany's relations with the U.S. also have an important part in the program. Even though the term "friend" has been dropped in this year's program, four years ago, the joint program of CDU and the CSU referred to the United States as Germany's "most important friend" outside of Europe.

The 2013 program also described the "friendship" with Washington as a "cornerstone" of Germany's international relations and talked about strengthening transatlantic economic ties through the removal of trade barriers.

But the words "friend" and "friendship" are missing from the latest election program - entitled "For a Germany in which we live well and happily" - which Merkel and CSU leader Horst Seehofer presented on Monday ahead of a Sept. 24 election.

Instead, the United States is described as Germany's "most important partner" outside of Europe. CDU officials were not immediately available to comment on the change in wording.

The change in wording underscores how relations between Berlin and Washington have deteriorated since U.S. President Donald Trump entered the White House in January.

During his campaign for the presidency, Trump said that Merkel was "ruining" Germany with migration policies he described as "insane".

He has repeatedly denounced Germany's trade surplus with the United States, accused Berlin and other European partners of owing "massive amounts of money" to NATO, and unsettled western partners with his decision last month to pull out of the Paris climate accord.

A survey by the Pew Research Center last week showed that just 35 percent of Germans have a favorable view of the United States, down from 57 percent at the end of President Barack Obama's term.

Merkel is due to host Trump and other leaders at a G20 summit in Hamburg later this week.

In place of the 2013 passage about strengthening economic ties, the 2017 program refers to historical U.S. support for Germany after World War Two and in the run-up to German reunification.

The new CDU/CSU election program also repeats a line that Merkel used in a speech in Munich in late May after a difficult summit of G7 leaders, where Trump resisted pressure from six other nations to stay in the Paris agreement.