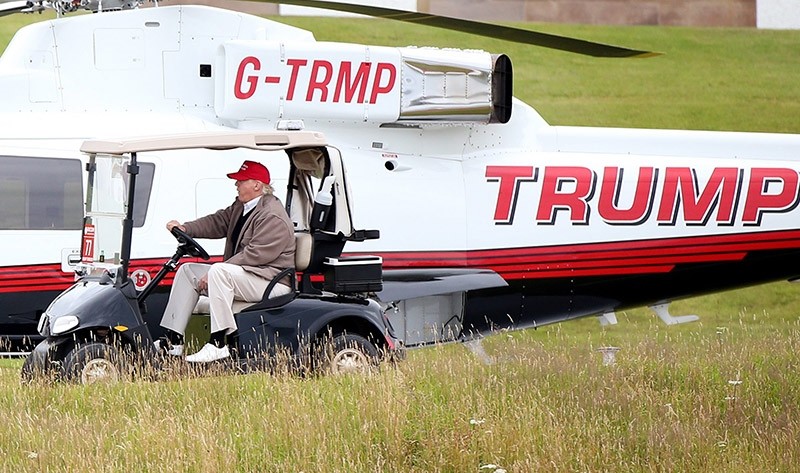 In this Friday, July 31, 2015 file photograph, U.S. President Donald Trump drives his golf buggy past his helicopter during the second day of the Women's British Open golf championship on his Turnberry golf course in Turnberry, Scotland. (AP Photo)
by Jul 03, 2017 12:00 am

The British government is not aware of any plans for U.S. President Donald Trump to visit Britain in the next few weeks, Prime Minister Theresa May's spokesman said on Monday.

British media reported that government sources had been warned Trump could visit his golf resort in Scotland at short notice in the next two weeks, during a scheduled trip to Europe for the G20 summit and Bastille Day celebrations in France.

"I am not aware of any plans for the president to visit the UK in the next few weeks," May's spokesman told reporters. He said an invitation for Trump to come to Britain on a state visit had been accepted and details would be set out in due course.

May extended the invitation to Trump during a trip to Washington in January but the date has never been announced and media have reported that the trip has been postponed over concerns over the risk of protests.