Juncker calls EU parliament ‘ridiculous’ after only 30 MPs show up 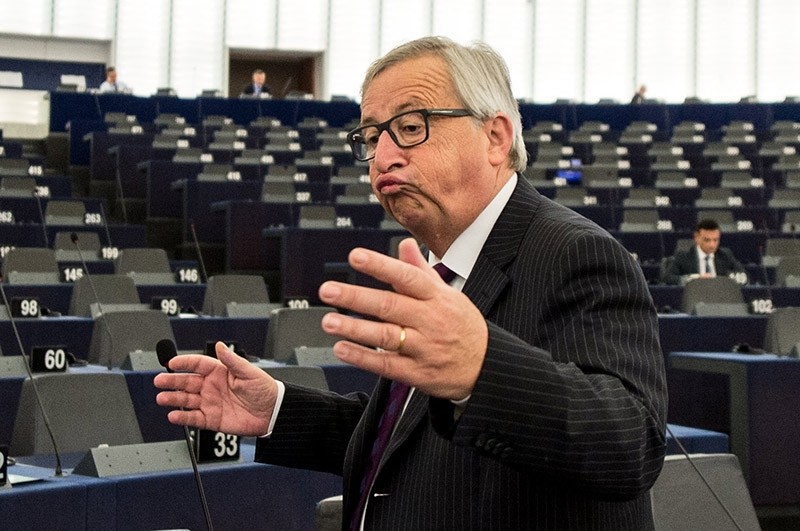 President of the European Commission Jean-Claude Juncker delivers his speech at the European Parliament in Strasbourg, France, 04 July 2017. (EPA Photo)
by Compiled from Wire Services Jul 04, 2017 12:00 am

EU chief executive Jean-Claude Juncker called European lawmakers "ridiculous" on Tuesday for failing to turn up to an address by Malta's prime minister, saying they should show more respect for smaller members of the bloc.

Juncker, himself from the small Grand Duchy of Luxembourg, was visibly annoyed as he watched the proceedings in the near empty parliamentary chamber in Strasbourg.

After Juncker thanked the few dozens of the 700-plus legislators in the huge atrium for showing up, he insisted that "parliament is not serious" for failing to show up in large numbers for the keynote debate of the day.

To which Juncker retorted: "There are only a few members in the parliament to control the Commission. You are ridiculous."

The exchange at the legislature in Strasbourg, France, was even more amazing since Juncker and Tajani belong to the same EPP Christian Democratic group.

Though the European parliament has increased its clout over the past years after earning a bigger say in a host of issues, it is often still perceived as an easy job for politicians without a big national portfolio and veterans seeking a leisurely way to retirement.

The views of the parliament bore out Juncker's assertion with row after row of empty seats. Philippe Lamberts of the Greens group, one of the few to show up, was seen applauding the rebuke of Juncker.

The session centered on the Maltese presidency of the EU which ended on July 1, and Prime Minister Joseph Muscat was attending the plenary.

"If Mr. Muscat was Mrs Merkel, difficult as that is to imagine, or Mr Macron ... we would have a full house," Juncker said, referring to the leaders of Germany and France.

Muscat, who smiled during the exchanges, gave parliament a briefing on his country's presidency, focused on the challenges of migration and called Brexit a "disastrous creature which all of us should have seen coming but none of us acted to stop".

Slightly more than 400,000 people live on Malta, putting it just behind Luxembourg whose population comes in over the half-million mark.