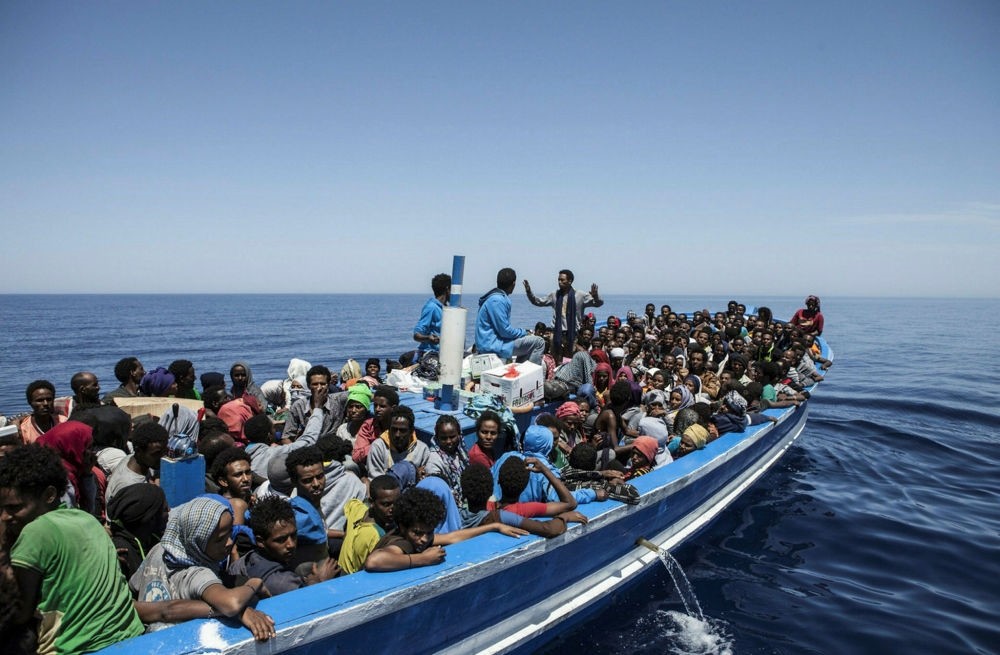 Migrants aboard a wooden boat on the Mediterranean as they try to reach Europe.
by Compiled from Wire Services Jul 05, 2017 12:00 am

Austria announced that it is preparing to impose strict controls at its border with Italy very soon to block migrants, causing new diplomatic tensions with Rome

Pointing to the large number of migrants who have been arriving in southern Italy, Vienna's defense minister was quoted Monday saying his country would "very soon" impose border checks and deploy soldiers on its frontier with Italy if the influx of migrants across the Mediterranean does not slow.

"I expect that very soon border controls will be activated and that an assistance deployment (by the military) will be requested," Hans Peter Doskozil told the online edition of the Krone daily.

He was cited as saying that this move was "indispensable if the inflow into Italy does not ease". The newspaper said that 750 soldiers were available and that four armored vehicles had already been sent to the area over the weekend. Austria introduced checks on its eastern border with Hungary in 2015 and has readied physical measures such as barriers on its Italian border to the south-west, including at the famous Brenner Pass.

Italy's foreign ministry summoned the Austrian ambassador on Tuesday after Vienna said it was considering introducing border controls to block migrants from passing between the two countries.

In addition, light-wheeled tanks had been transferred to Austria's Tyrol region to support police there if necessary, he told the tabloid Kronen Zeitung.

"I expect the activation of border controls and a request for an [army] assistance operation in the very near term," he said.

Italy's foreign ministry summoned the Austrian ambassador on Tuesday after Vienna said it was considering introducing border controls to block migrants from passing between the two countries. The ministry said the move followed "the declarations of the Austrian government concerning the deployment of troops to the Brenner Pass" on the border.

Controls at the Brenner could disrupt cargo traffic, and it could cause considerable delays for German tourists during the summer holidays. "Border checks would lead to a very tense traffic situation," the German motorist club ADAC said in a statement.

Every year, more than 5 million cars cross the mountain pass, many of them from Germany. Politicians in northern Italy pointed out that there is no increase in migration in their region, and they linked Tuesday's developments to Austria's parliamentary elections in October. Austria introduced checks on its eastern border with Hungary in 2015 and has readied physical measures such as barriers on its Italian border to the south-west, including at the famous Brenner Pass.

More than 100,000 migrants have made the perilous Mediterranean crossing to Europe this year, the U.N. said Tuesday, amid mounting tensions among EU nations on how to tackle the crisis. Nearly 2,250 people have died in 2017 attempting the sea crossing from North Africa, the UN's International Organization for Migration (IOM) added. While the numbers arriving in 2017 are staggering, they remain far below last year's figures. During the same period in 2016, 231,503 people made the crossing to Europe, with the 100,000-mark passed already in February that year. Italy has taken in nearly 85 percent of the arrivals -- most of them sub-Saharan Africans crossing from Libya -- and has pleaded for help from other European Union nations, saying it is struggling to cope.

On Sunday, Italian Interior Minister Marco Minniti called on EU neighbors to open their ports to rescue ships picking up migrants in the Mediterranean, after issuing a drastic threat to close its own ports to the boats. But France rejected that idea, with an aide to Minniti's counterpart Gerard Collomb telling AFP this would only encourage more migrants to set sail.

E.U. interior ministers are due to meet in Estonia's capital Tallinn tomorrow to discuss the migrant crisis in a bid to defuse a long-running row over spreading asylum seekers across the bloc.