Acrobat falls to his death during Madrid music festival performance 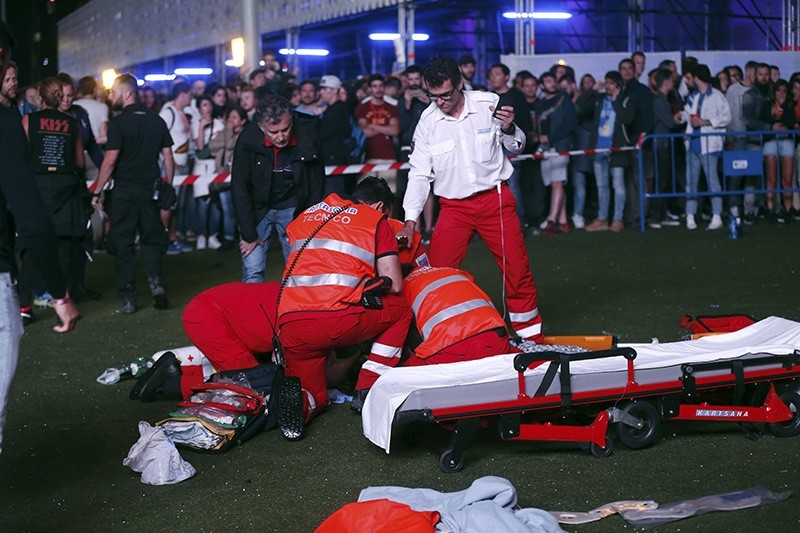 Emergency services assist an injured acrobat who was reportedly injured while participating in an entertainment show in between the concerts of Alt-J and Green Day during the Mad Cool Festival in Madrid, Spain, July 07, 2017. (EPA Photo)
by Jul 08, 2017 12:00 am

An acrobat fell to his death at a music festival in the Spanish capital Madrid late Friday, moments before the U.S. band Green Day took to the stage.

The organizers of the Mad Cool Festival said they were "saddened by the terrible accident," but gave no explanation as to how it had happened.

Videos posted online showed an acrobat in a cage high above the crowd suddenly fall around 30 meters to the ground.

Many of the 45,000 spectators initially assumed the incident was part of the act until they witnessed paramedics running to the scene.

El Pais newspaper said the dead man was a Spaniard born in 1975.

Green Day were criticized on social media for continuing with their performance, but appeared to have been unaware of his death until after they had finished.

"We just got off stage at Mad Cool Festival to disturbing news. A very brave artist named Pedro lost his life tonight in a tragic accident," the band tweeted early Saturday.

"Our thoughts and prayers go out to his family and friends."

The organizers said in a statement they had decided to continue with the music program for "security reasons" and offered their condolences to the man's family. He would be remembered at the festival on Saturday, they said.

The line-up at the festival also includes the Foo Fighters, the Manic Street Preachers, Kings of Leon, MIA, Ryan Adams and Belle and Sebastian.