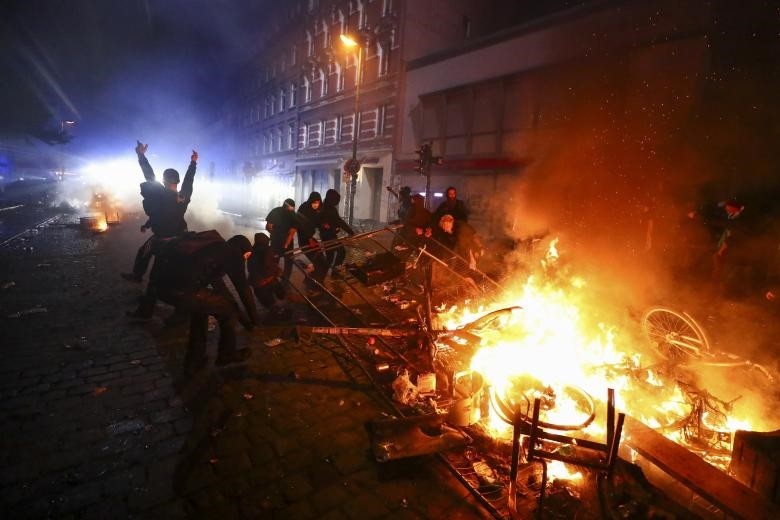 Private and public property burns as protesters clash with riot police during the protests at the G20 summit in Hamburg, Germany, July 7
by Angelos Berberakis Jul 10, 2017 12:00 am

The aptly named 'Welcome to Hell' weekend-long riot in Hamburg overshadowed the actual G20 proceedings, leaving behind a trail of fire, debris and destruction

Rioting, vandalism, uncalled-for violence, torched vehicles, looted markets. This is what went on in the streets of Hamburg, while the G20 leaders discussed matters such as climate change and the alleviation of poverty around the globe.

Dressed in all-black with face-covers, the members of Antifa, the black block, or whatever they call themselves these days, launched stones and bottles at police while accusing everyone they didn't recognize of being a "Nazi," just before physically assaulting them.

They would have not been too out of place in 1920s and early 30s Berlin, when National Socialists and Communists were openly fighting in the streets, amongst each other and the Reichswehr.

This time around, though, these neo-Bolsheviks and self-proclaimed "anti-globalists" had no opposition other than German police forces, who had brought in reinforcements from all around the country because the rioting looters of the far-left had brought in their members from around the continent.

There was no absence of red flags with stars, hammers and sickles.

It is not yet clear just how many people were in the streets, or what percentage of them was actually violent. Estimates range from a few tens of thousands to as many as 100,000 people in the city of five million.

Claiming to be engaging in "class struggle," apparently Antifa thought it a good idea to burn dozens of cars belonging to average people, loot stores and markets as well as destroy anything they could on the streets, be it public or private property, from ATM machines to the sidewalk stones themselves.

Pillars of smoke, rising tens of meters into the air, gave the impression of an air raid when viewed from a distance.

Hamburg police have said that 144 people were arrested, while 213 officers were injured during the chaos.

Footage of the riot-stricken parts of the city might as well portray an early stage dystopia, with specially outfitted police officers and public workers moving aside fallen street signs, half-burned bicycles and mangled shopping carts, all apparently symbols of the bourgeoisie.

"Adventure tourists" is what head of the German Die Welt Ulf Poschardt characterized the non-Germans who had made their way to Hamburg to protest. He called them out, saying that they resembled Benito Mussolini's Blackshirts and also dismissed the notion that the left represents the working class as a myth, saying that the working class would've actually sided with the police and indeed, local interviewees seem to agree with this sentiment.Some Hamburg residents were even seen trying to extinguish car fires with buckets of water and hoses before the fire department could arrive.

It would be worth noting that in 2015, then-Family Minister and current Social Democratic (SPD) Governor of Mecklenburg Vorpommern Manuela Schwesig, as well as several other recent and past SPD members, had proclaimed, "Left wing extremist is an over-exaggerated problem."

Left-leaning political parties, institutions and organizations have been silent over what has occurred, with some try to justify the violence and others outright support it.

Black clad Antifa members had planned this excursion of theirs, sending busloads of people from essentially all over Europe to disrupt the peaceful protestors present in the city.In fact, a public website by the name of linksunten.indymedia.org was the main center of operations of Antifa during this and other protests in the past. The website lists events that Antifa believes their members should be sent to disrupt. It also proclaims that it doesn't care about what's legal and illegal and has a map of safe houses for its members to sleep over; many such locations are occupied public buildings, such as the Rote Flora Theater.

It doesn't end there. Not only do the forum members of the website encourage violence and protect those who commit it, but the violators are also free to post their "achievements" on the website and brag about them, such as vandalizing the statue of Otto Von Bismarck and burning cars in the name of "class struggle."

This isn't just a website with politically correct, wishy-washy sociological flimflam about gender theories, but an online hotspot for thugs who violently break the law and then proceed to boast about it.

Even though matters of grave importance were discussed by the G20 leaders in Hamburg, so far the event itself has been overshadowed by the destruction its protestors left behind.

Even so, President Donald Trump held a much-anticipated meeting with his Russian counterpart, Vladimir Putin. The two men weren't the only highlight of the summit. G20 host and Chancellor Angela Merkel pushed her agenda to do more to aid and develop Africa, while Chinese premier Xi Jinping and Japanese Prime Minister Shinzō Abe mainly focused on the North Korea problem.

"I condemn in the strongest terms the extreme violence and unbridled brutality that police were repeatedly confronted with. There is no justification for plundering, arson and brutal attacks on the lives of police officers; anyone who acts in this way places himself outside our democratic community," Chancellor Merkel said following the G20 summit.