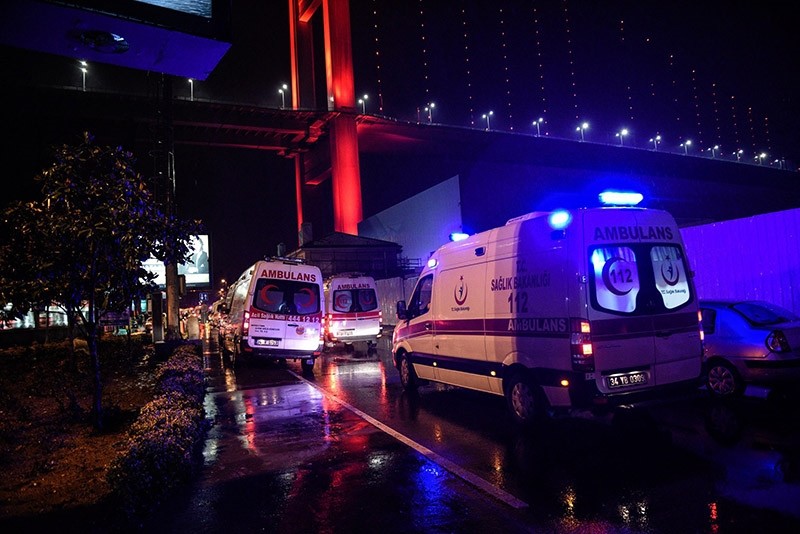 Ambulances transport wounded people after a gun attack on Reina, a popular night club in Istanbul near by the Bosporus, early morning in Istanbul, turkey 01 January 2017. (EPA Photo)
by Daily Sabah Jul 12, 2017 12:00 am

Danish authorities recently detained and later released a Daesh suspect sought by Turkey for providing arms to the Daesh member who killed 39 people in an attack on an Istanbul night club, according to a recent report.

According to the Turkish Karar daily, Ibrahimjon Asparov was detained on June 29, and later released as part of a counterterror investigation.

Asparov is being sought by Turkish authorities as the person who gave the weapons used to Abdulgadir Masharipov, the Daesh terrorist who conducted the attack on New Year's Eve at Istanbul's Reina nightclub. Asparov, who was said to be a Danish citizen, reportedly escaped to Denmark after the attack. South-East Jutland Police detained him on suspected Daesh links and interrogated him as part of a counterterror investigation, but he was later released. According to a report, Asparov is still in Denmark.

The Danish daily Ekstra Bladet also reported the developments and confirmed Asparov's release. "The arrest was made on the grounds of contradiction to anti-terrorism legislation, but he was released, the investigation continues," Danish police were quoted as saying in Extra Bladet.

The lone Daesh gunman, who was identified as Uzbek-born Abdulgadir Masharipov, fired on revelers with an AK-47 rifle before fleeing the scene. He was captured in a residence in Istanbul's Esenyurt district a few weeks after the attack. Along with Masharipov, 50 suspects were jailed for connections to the brutal attack while six others remain at large. Following the Reina nightclub attack, Turkey launched nationwide operations that have netted hundreds of suspected terrorists.

According to official sources, both the Uzbek national suspect, Rakhmat Akilov, responsible for the Stockholm attack, and the St. Petersburg metro attacker, Akbarzhon Dzhalilov, were initially deported from Turkey on alleged affiliations to Daesh as foreign fighters. Turkish security officials said that Dzhalilov was deported from Turkey in 2016 for violating the country's visa laws.

Similarly, Ibrahim el-Bakraoui, 29, one of the two brothers identified by Belgian authorities as responsible for the attack that killed more than 30 people and wounded over 270 in Brussels in March of last year, entered Turkey on June 11, 2015, and was detained by Turkish authorities on June 14. He was subsequently deported on July 14, 2015, a senior security source previously told Daily Sabah.

Brahim Abdeslam, one of the suicide bombers in Paris in November, was also sent back to Belgium from Turkey in early 2015. After being sent to France by Belgium, he was questioned by French authorities and was later released.

With Turkey's ongoing anti-Daesh operations, the terrorist group has been blocked from carrying out attacks on civilians. Meanwhile, Turkey also cleared its southern border with Syria from Daesh terrorists with Operation Euphrates Shield.

Daesh terrorist attacks in Turkey, which increased between July 2015 and August 2016, and killed nearly 300 people, drastically decreased after the operation was launched on Aug. 24, 2016. After that date, Daesh has only managed to carry out one attack inside Turkey.
Last Update: Jul 12, 2017 2:57 pm
RELATED TOPICS