Trump heads to Paris to discuss Syria, terrorism amid division with Macron 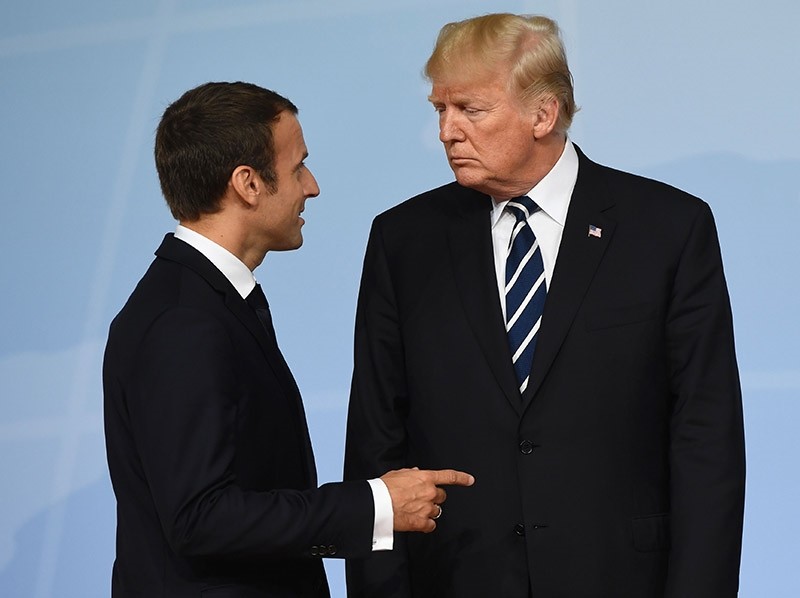 This file photo taken on July 07, 2017 shows US President Donald Trump (R) and French President Emmanuel Macron talking after posing for the family photo on the first day of the G20 summit in Hamburg, northern Germany. (AFP Photo)
by Compiled from Wire Services Jul 12, 2017 12:00 am

U.S. President Donald Trump will travel to Paris on Wednesday to meet with French President Emmanuel Macron where the two leaders will seek to work together on Syria and countering terrorism, while avoiding the thorny issues that have divided them.

Trump and Macron -- both political newcomers who scored upset victories in their presidential elections -- have taken very different positions in areas such as climate change and trade.

U.S. and French officials have said Trump's visit to Paris will allow the leaders to focus on those places where their interests overlap, including resolving the conflict in Syria and combating global terrorism.

The U.S. president will mark the 100th anniversary of America's entry into World War I by visiting U.S. troops. White House officials are casting it as a celebration of the U.S.-French military alliance — both then and now.

Trump and Macron are scheduled to hold a joint news conference, during which Trump may face tough questions on the latest revelations about his son's contacts with a Russian lawyer. The two leaders and their wives will end a busy day of meetings Thursday with a lavish dinner at Jules Verne, at the top of the Eiffel Tower.

Trump's brief trip to France follows his attendance of the G20 meeting in Hamburg, Germany last week. The United States was left relatively isolated during the summit, when it reaffirmed Trump's decision to pull out of a landmark international accord reached in Paris in 2015 to fight climate change.

"They have completely contrasting messages, where Trump has argued for 'America first,' Emmanuel Macron is arguing for a kind of cosmopolitan globalist vision of France and of Europe," said Erik Jones, director of European and Eurasian Studies at Johns Hopkins University.

"That is going to create very sharp contrast when the two meet in France,"

In the leadup to what will be Trump's first official visit to France, the White House chose to highlight areas where the two leaders can collaborate, and said their differences could foster more constructive dialogue.

"Macron and the president have somewhat different views on how to achieve the end goal, but I think the end goal is the same," Trump's top economic adviser Gary Cohn said last week.

Macron's path to the presidency was nearly as unlikely as Trump's. Rejecting ties with the French mainstream parties that had controlled the government since modern France began, he launched his own political movement just over a year ago and campaigned on pro-business and pro-European policies in direct counter to Le Pen.

"Both of these men were elected as outsiders and neither of them is really tied to their own national political establishments," said Benjamin Haddad, a Washington-based French political analyst with the Hudson Institute. "That may actually work to their advantage."

And Macron's national security pitch hasn't differed drastically from Trump's. On Syria, he argues for intervention, saying that the Assad regime is a threat to Syria and the Daesh terror group is a threat to France. France has been plagued in recent years by a series of terrorist attacks, including one of the deadliest attacks during Bastille Day celebrations last year, when a 19-ton cargo truck deliberately plowed into crowds in Nice, killing more than 80 people.

Macron supports intervention against the Assad regime in response to its use of chemical weapons and could prove an important ally as the Trump administration seeks to increase pressure against Damascus. But in doing so, they'll need to tackle the issue of Russia's support for Assad, something Trump has only passively acknowledged.