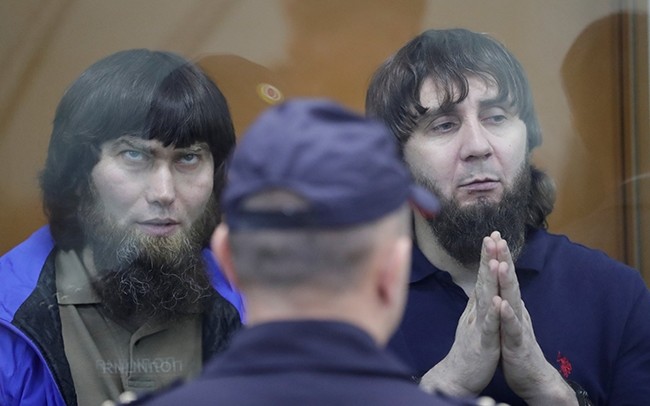 Anzor Gubashev (L) and Zaur Dadayev, convicted of the killing of Russian opposition leader Boris Nemtsov, sits inside the defendants' cage during their sentencing hearing at the Moscow military district court, Russia, July 13, 2017. (Reuters Photo)
by Compiled from Wire Services Jul 13, 2017 12:00 am

A court sentenced a man convicted of murdering Russian opposition leader Boris Nemtsov to 20 years in jail on Thursday and handed terms between 11 and 19 years to four other men convicted of being his accomplices.

The jury last month found the five men guilty of killing Nemtsov in 2015, but the late politician's allies said the investigation had been a cover-up and that the people who had ordered his killing remained at large.

Nemtsov, a top political opponent of President Vladimir Putin, was shot late at night in 2015 as he was walking across a bridge just outside the Kremlin. His brazen murder that sent shockwaves through the Russian opposition.

Nemtsov's allies have criticized the investigators for stopping short of investigating the possible role of Chechen leader Ramzan Kadyrov and top Chechen officers in the killing.

When the now-sentenced gunman, former officer Zaur Dadayev, was arrested shortly after the slaying, Kadyrov vehemently defended him as a "true patriot."

Nemtsov's family has petitioned investigators to look into Kadyrov's possible involvement and to question Ruslan Geremeyev, commander of the police unit in which Dadayev served.

The police commander was summoned to testify, but he failed to show up. Investigators told the court last year that they visited Geremeyev's property in Chechnya but "no one opened the door."