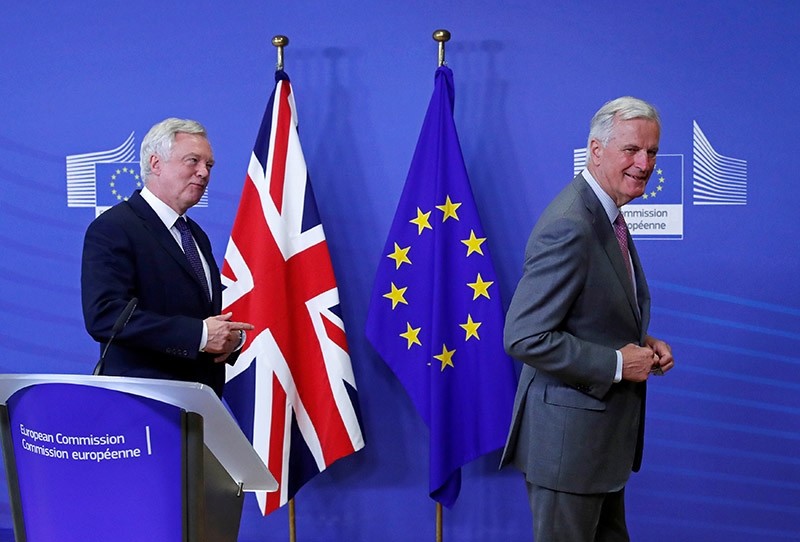 UK Secretary of State for Exiting the European Union David Davis (L) is welcomed by the European Commission's Chief Brexit Negotiator Michel Barnier at the start of Brexit talks in Brussels, Belgium July 17, 2017. (Reuters Photo)
by Compiled from Wire Services Jul 17, 2017 12:00 am

The European Union and Britain kick off their first full session of their divorce proceedings with both sides bent on seeking a quick breakthrough on unraveling ties that have bound them for decades.

U.K. Secretary of State David Davis said at the start of the four-day session Monday that "it is incredibly important we now make good progress."

The talks this week are set to center on the rights of citizens in each other's nations post-Brexit, the bill Britain has to pay to meet existing commitments, the border issue in Ireland and the pre-eminence of the EU's Court of Justice.

"We are getting into the substance of the matter," Davis said.

"We need to examine and compare our respective positions in order to make good progress," Michel Barnier, the EU's chief negotiator said ahead of the meeting.

Britain, a member of the EU since 1973, is the first country ever to leave the bloc following a referendum last year.

Teams from both sides will start meeting this afternoon, and are set to conclude the talks on Thursday.

The talks are the first full round of negotiations that formally began last month with a one-day session to agree on a timetable.

The EU has demonstrated increasing confidence in recent weeks, accusing Britain of dithering over whether it wants a "hard" or "soft" Brexit more than a year after the shock referendum that propelled May to power.

Brussels insists it will only start discussing the future relationship once there has been "sufficient progress" on the divorce -- an estimated 100-billion-euro ($112 billion) exit bill, the rights of three million EU citizens living in the UK, and the border in Northern Ireland.

This week's talks are also set to address more detailed concerns such as Britain's future in Euratom, the EU's nuclear safety agency, and the role of the European Court of Justice, the EU's top court.

EU leaders are set to decide at a summit in October whether there is enough common ground to move on to trade talks.

Common ground was very much lacking last week after British foreign minister and leading Brexiteer Boris Johnson remarked that the EU could "go whistle" over its massive Brexit bill demand, drawing a rebuke from Barnier.

"I am not hearing any whistling, just the clock ticking," said the former European Commissioner and French foreign minister.

Johnson, who was in Brussels on Monday separately to meet his 27 EU colleagues, said he hoped the bloc would accept the "very fair and serious offer" Britain had made on the rights of EU citizens.

"I hope very much that people will look at that offer in the spirit it deserves," he told reporters.

UK finance minister Philip Hammond said Sunday that Britain will take responsibility for the money it owes, but dismissed the 100 billion euro figure as "ridiculous".

Barnier last week held a series of meetings in Brussels with British opposition Labour leader Jeremy Corbyn and other UK figures at odds with May.

They are all deeply wary of May's hardline approach that would see the UK leave the EU without full access to the bloc's single market of 500 million people, in order to curb free immigration from the bloc.

May's minority government remains fragile one month after the snap June 8 election in which her Conservative Party lost its majority, forcing it to seek an alliance with Northern Ireland's small ultra-conservative Democratic Unionist Party.

The tensions have shaken the British government, which on Thursday introduced the draft law that would formally put an end to Britain's membership of the European Union.

May faces a battle over the bill, which opponents said included a dangerous "power grab" by London at the expense of Scotland and Wales.

Hammond, a potential rival to May, acknowledged that ministers were divided on many elements of Brexit, after weekend newspapers were filled with reports of infighting.

"I think on many fronts it would be helpful if my colleagues -- all of us -- focused on the job in hand. This government is facing a ticking clock over the Brexit negotiations," Hammond said.