Merkel in discord with Bavarian sister party over immigration 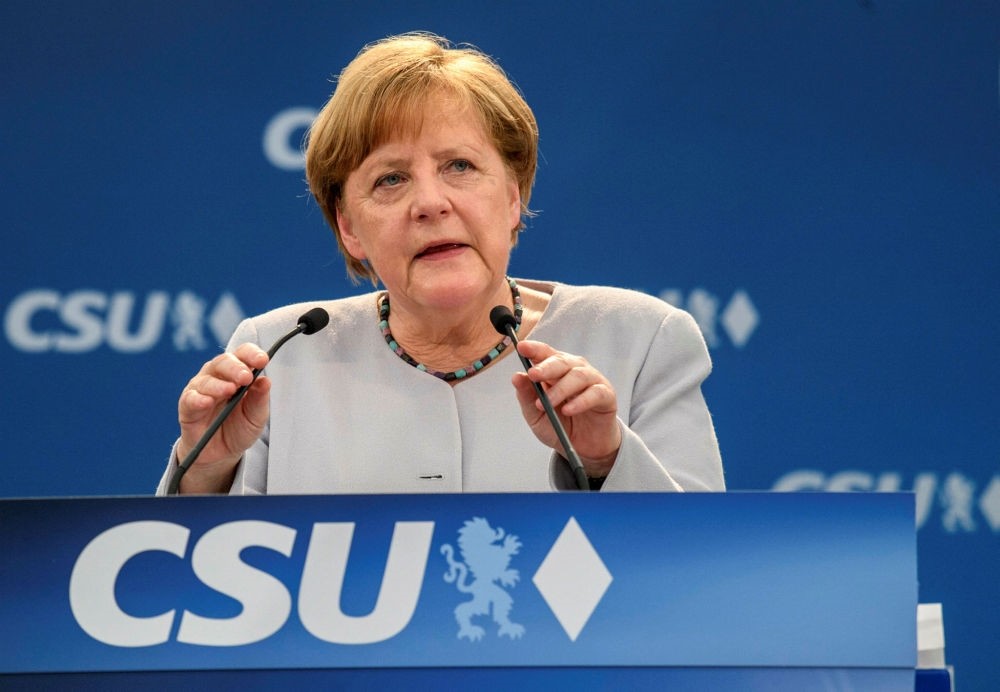 German Chancellor Angela Merkel delivers a speech during an election campaign of her Christian Democratic Union and the Christian Social Union in Munich, southern Germany, May 28.
by Angelos Berberakis Jul 18, 2017 12:00 am

In an annual televised interview on Sunday, German Chancellor Angela Merkel said that there will be no upper limit placed on the number of refugee entries into the country, putting her in direct opposition to the Bavarian Christian Social Union (CSU), the sister party of Merkel's Christian Democratic Union (CDU).

"As far as an upper limit is concerned, my position is clear: I will not accept it," she said, adding that it's not the "way forward" and that the number of entries could be reduced with additional government regulations as well as action taken in the problem countries of origin, bringing to mind her remarks about Africa at the Hamburg G20 summit.

These positions are not shared with Minister-President and CSU Chairman Horst Seehofer, who has, in the past, called for the German federal government to close the country's borders and has bussed people into Berlin as Bavaria could not house the hundreds of thousands coming in.

Seehofer actually has a more conservative immigration policy, having called for "zero tolerance" for criminals in a May interview, adding that the population's security comes before everything.

The rift between the Bavarian minister-president and the chancellor is not a new one and, as the years have gone by since September 2015 - the year when Merkel opened the doors of Germany (and, subsequently, Europe) to refugees - public opinion has leaned more and more on the side of Seehofer.

Pew Research has revealed that nearly 70 percent of Germans disapprove of the current European immigration policy, while nearly 60 percent believe that all further immigration from mainly Muslim countries should be stopped, according to the Royal Institute of International Affairs. Only 19 percent disagreed with the notion while 28 percent remained unsure, reflecting averages from across the EU.

Merkel had even set aside 90 million euros in taxpayer money to create a fund that would pay immigrants to withdraw their asylum applications and leave Germany, this after Tunisian immigrant Anis Amri murdered a Polish truck driver and proceeded to ram his vehicle into crowd at a Berlin Christmas market, killing 11 more people and injuring 56.

However, despite the recent G20 meetings, disagreements with U.S. President Donald Trump over his policy on climate change and the ongoing feud with Turkey regarding military bases, what Merkel has to worry about now is the German September federal election.

The CDU's main rival has historically been the Social Democrats (SPD) and, with Martin Schulz's rise as the SPD's leader, polls have begun reflecting a worrying shift.

Early 2017 polls revealed that the two parties competing for first place are going head to head, with the SPD overtaking the CDU in some polls by 0.5-1 point. However, after March, the CDU's clear lead was re-established and, now, the polls show that it could be anywhere from 11 to 17 points ahead.

It appears that Merkel can now breathe a sigh of relief, especially since the populist Alternative for Germany (AfD) which had a 15 percent approval rating and was on its way to becoming the country's third most popular party, has now dropped to eight or nine percentage points, despite the increased influx of migrants.