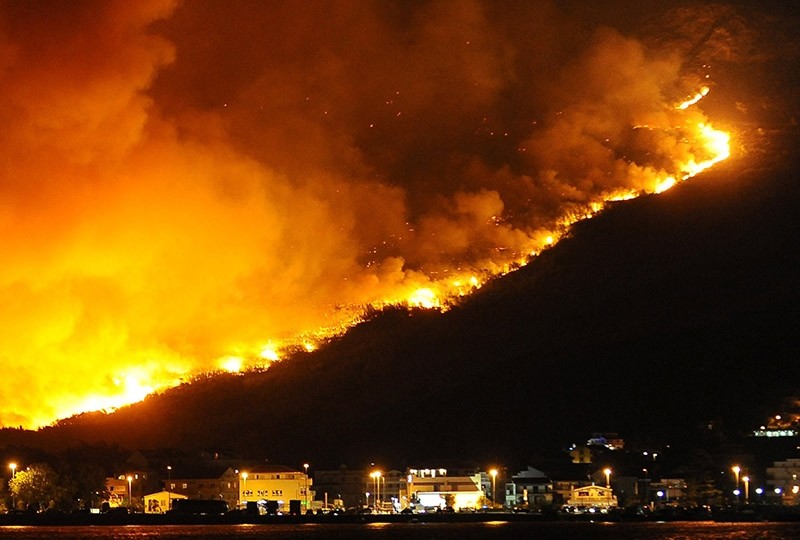 Firefighters battled to douse wildfires on the Adriatic coast of Croatia and Montenegro on Tuesday, as blazes also raged in Italy, France and Portugal.

About a dozen wildfires had broken out late Sunday in the villages surrounding Split, a popular tourist destination, but firefighters managed to control the blaze on the outskirts of Croatia's second largest city.

Late Monday the fire spread to the suburbs of Split where a shopping center had to be evacuated and several cars were burned.

The city waste dump caught fire, while the town was covered with thick black smoke, but the blaze was put under control overnight.

"It seems that the worst is behind us ... Split has been saved," Mayor Andro Krstulovic Opara told HRT state-run television.

Local media reports however said some parts of Split were without electricity or water on Tuesday as Prime Minister Andrej Plenkovic arrived to take stock of the situation.

According to initial estimates some 4,500 hectares (11,120 acres) of land, mostly pine forests, bushes and olive groves, were destroyed. Houses were burned but there were no casualties.

In neighboring Montenegro, where the forest fires forced the evacuation of more than a hundred campers on the Lustica peninsula, the situation was slightly better Tuesday.

Fires however were still active in several municipalities further inland but were all under control, an interior ministry statement said.

The cause of the fires in the two countries at the height of the summer tourist season is still not known.

In Italy, authorities said a blaze in a pine forest at a popular park outside Rome, now under control, was deliberately set and that a suspect has been arrested.

But fires continue burn in southern Italy in parts of the Calabria region and in the outskirts of Naples where one person died on Monday after falling off his roof where he went to look at how the forest fire was progressing not far from his home.

Winds, high temperatures and dry conditions prompted fires to break out the past several days in southern France and the Mediterranean island of Corsica.

More than 450 firefighters were still battling a forest fire at Castagniera, north of Nice, which has destroyed some 100 hectares but appears not to be spreading further, authorities said.

On Monday fire swept through around 200 hectares of scrubland near Bonifacio in southern Corsica.

Civil protection authorities say firefighters have managed to mostly bring the fires under control and the weather on Tuesday was cooperating as temperatures dropped from 35 degrees Celsius (95 degrees Fahrenheit) to 30 C.

Last month Portugal battled a giant fire in the central region that raged for five days, killing 64 people and injuring more than 250, with many trapped in their cars by the flames.