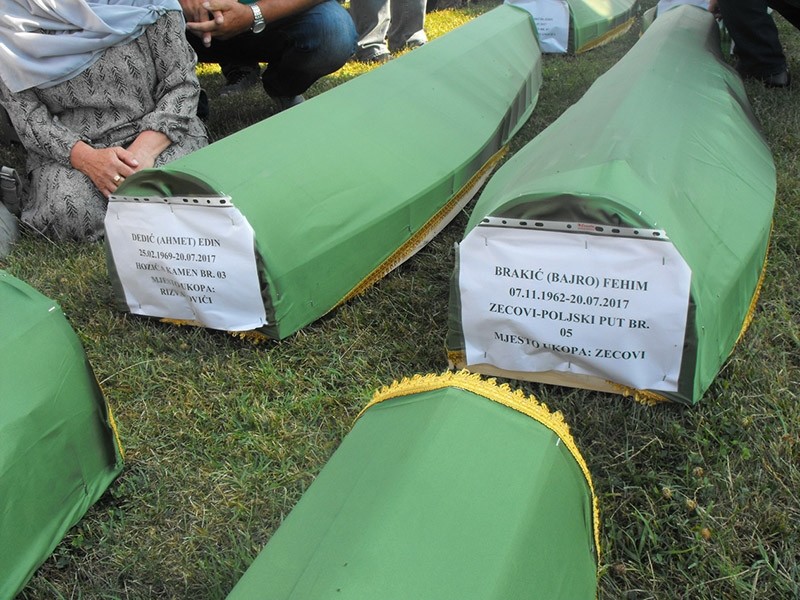 The remains of 23 Bosniaks killed by Serb forces in the northwestern Bosnian town of Prijedor in 1992 were buried on Thursday.

Relatives of the victims and a large number of citizens gathered at the Poljana Stadium near Prijedor for a collective funeral.

President of the Islamic Community in Croatia, Aziz Hasanovic, told mourners that the second-largest massacre during the 1992-1995 Bosnian War was carried out in Prijedor, adding the international community had preferred to close its eyes.

More than 5,200 Bosniaks -- including 4,093 civilians -- were killed during the war, according to Bosnia's Missing Persons Institute.

Around 2,000 victims have been located and identified so far in 100 mass graves in Prijedor and surrounding areas. The bodies of 777 victims of the massacre remain undiscovered.

Prijedor Mayor Milenko Djakovic, who is a Serb, also participated in Thursday's funeral.

Speaking at the ceremony, Djakovic said he attended for people to live in peace and harmony in Prijedor.

Eighteen-year-old Ifet Vojnikovic was the youngest victim to be buried at this year's funeral, while Sefir Hegic, 72, was the oldest.

The 23 victims were buried in village cemeteries after funeral prayers.

Prijedor was the site of numerous war crimes carried out against Bosniak civilians by Bosnian Serb forces during the war.

The Bosnian War was sparked by the break-up of Yugoslavia, which led Bosnia to declare its independence in February 1992.

Its capital Sarajevo came under attack from Bosnian Serb militias, backed by the Yugoslav army, in what became the longest siege in modern history.