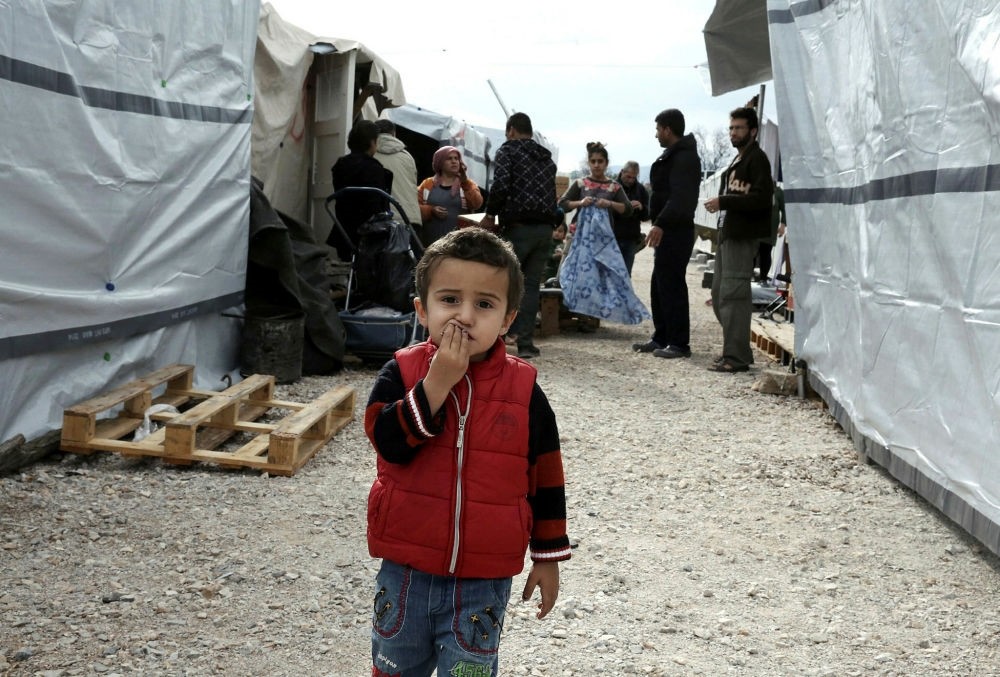 A Syrian refugee child stands outside tents at the refugee camp in Ritsona, north of Athens, Greece.
by Daily Sabah with Wires Jul 21, 2017 12:00 am

Greece does not adequately care for scores of migrants, identified as unaccompanied minors, due to flaws in its age assessment protocol, HRW says

When it comes to Greece's migrant population, unaccompanied minors are falling through the cracks as the country continues to fall short in providing adequate protection to this marginalized segment of the refugee population.

In Greece, migrants who are unaccompanied minors are either registered as adults or placed under the guardianship of single, adult males who are of no biological relation to them, according to a report released by Human Rights' Watch (HRW).

Due to flawed procedures in age assessment, some of this lone children are wrongly deemed as adults during the registration process, with some opting to register themselves as adults to avoid being placed in detention camps, the HRW report stated.

The report also revealed that children on the Greek island of Lesbos are being exposed to squalid living conditions and degrading humanitarian treatment, including overcrowded facilities, inadequate sanitation and frequent incidents of violence. According to HRW, more than 1,100 unaccompanied minors are still waiting to be provided shelter on the island.

"The wrongful identification of unaccompanied migrant children as adults on the island of Lesbos leads to real problems; namely, lumping these children together with non-relatives and denying them access to the care that they need," HRW researcher on Greece, Eva Cossé, said. "Greek authorities need to take responsibility for the proper identification of unaccompanied minors and provide them with the protection and care that every child needs."

"Vulnerable kids in Greece who have endured dangerous journeys far from their families should not have to fight for months just to prove that they are children," Cossé said. "Greece should do a better job in identifying these children so they get the care they need and deserve."

According to EU law, a member state must take in unaccompanied minors who have family ties in European countries, under the Dublin rules. The so-called Dubs Amendment passed by European Parliament (EP) last year resulted in the U.K. agreeing to accept vulnerable refugee children who arrived in EU member-states prior to March 20, 2016. However, in February, the government announced plans to drop the plan, saying that it encouraged human trafficking. Charities working with refugees welcomed the announcement but expressed concern for the thousands of other unaccompanied migrant children in Europe who will not benefit from the plan.

Over 200 children have already been brought to the U.K. from France under the Dubs amendment, after the clearance of a makeshift camp in Calais known as "The Jungle" last October. France moved more than 6,000 migrants, many fleeing poverty and war in the Middle East and Africa, from the Calais camp to reception centers around the country to calm the brewing anger among locals. However, hundreds of refugees; especially unaccompanied children, have since gravitated back to the northern port, hoping to cross the short stretch of sea to the U.K. by jumping onto trucks and trains, or even walking through the tunnel under the English Channel. More than 20,000 children arrived by sea to Italy, 12,300 of whom were unaccompanied and separated children, according to 2016 data released by the U.N. Children's Fund (UNICEF).

The reports also reveal that European countries have fallen short in keeping track of unaccompanied minor children. In January 2016, EU law enforcement agency Europol said over 10,000 unaccompanied minors had disappeared in Europe, fueling fears that many have been whisked into trafficking rings or the slave trade. UNICEF had also voiced alarm and is urging European countries to do more to protect migrant children who are on their own.

In 2016, nine out of 10 minors arrived on the shores of southern Italy without their relatives. Most of the children who have arrived since the beginning of last year came from countries in West Africa, including Gambia, Nigeria and Guinea. Egyptians and East Africans from Eritrea and Somalia also make up a majority of the migrants. Last year, around 45 percent of all child refugees under the protection of the UNHCR came from Syria and Afghanistan. About three-quarters of all child refugees under the UNHCR's mandate came from just 10 countries: Syria, Afghanistan, Somalia, South Sudan, Sudan, the Democratic Republic of the Congo, the Central African Republic, Myanmar, Eritrea and Colombia.