Austria calls on Italy to keep migrants out of Europe 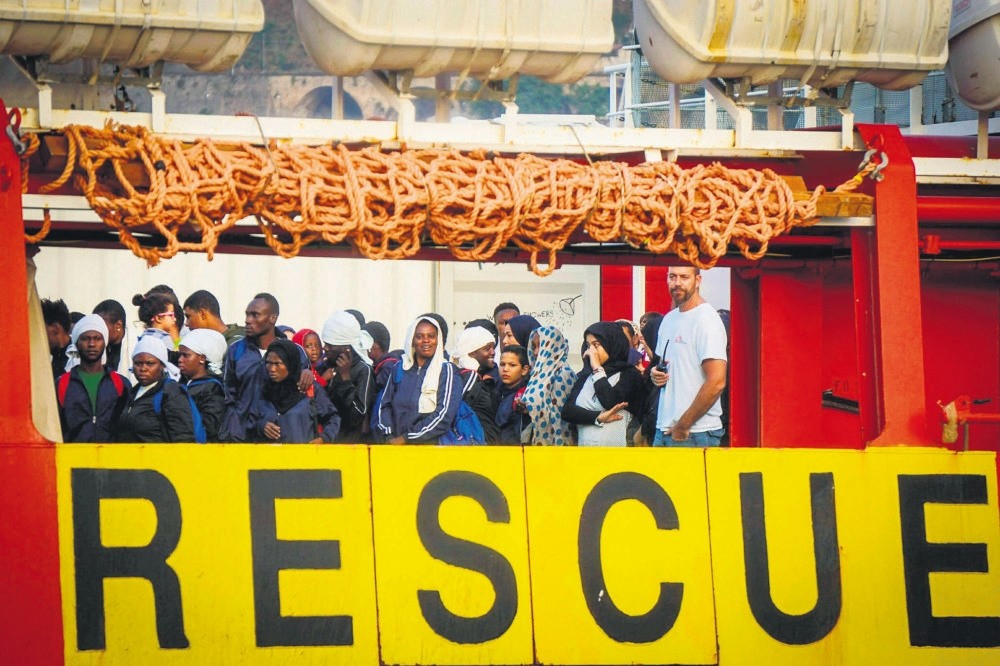 Migrants wait to disembark from the NGO Medecins Sans Frontier Vos Prudence ship after being rescued at sea, at Salerno's harbor, Italy, July 14.
by Compiled from Wire Services Jul 22, 2017 12:00 am

Following diplomatic tensions over border control, Austria called on Italy to stop migrants from reaching the mainland by halting ferry services from the islands where they first land

Austrian Foreign Minister Sebastian Kurz urged his Italian counterpart not to allow migrants arriving by boat to Italy's islands to travel on to the mainland, declaring that "[b]eing saved in the Mediterranean cannot be connected with a ticket to Central Europe." Further fanning the dispute, Kurz said: "We will protect our borders if Italy decides to wave more and more people toward the north."

After meeting with Italian Foreign Minister Angelino Alfano, Kurz told reporters that Austria expects an end to the practice of transporting migrants to the mainland by ferry. He said if it continues, more migrants will make their way northward to other EU countries, "increasing the overload for Central Europe," encouraging others to undertake the perilous journey from northern Africa and further lining the pockets of human traffickers.Italy's government is alarmed over repeated warnings from Kurz and Austrian Interior Minister Wolfgang Sobotka that Austria is ready to shut Brenner Pass should there be a marked increase in illegal migrant crossings there from Italy. With no signs of such developments and migration a top concern among Austrian voters, Italian politicians accuse the two of playing up the issue to increase the popularity of their center-right People's Party ahead of the October general elections.

Though Greece was the main entry point in 2015 and 2016, Italy now holds the title, with over 100,000 migrants crossing the Mediterranean in the past seven months, with numbers increasing.

Italy threatened to close its ports to aid groups rescuing migrants off Libya's coast as it struggles to cope with the highest rate of rescues this year. Italy's ambassador to the EU, Maurizio Massari, raised the issue during a meeting with EU Migration Commissioner Dimitris Avramopoulos, as a half-dozen different ships offloaded some of the more than 10,000 migrants rescued in recent days.

"Italy is right that the situation is untenable along the Central Mediterranean route," Avramopoulos said in a statement, adding that other EU members concurred and that the bloc was ready to increase financial assistance to help Italy manage the influx.More than 100,000 migrants have made the perilous Mediterranean crossing to Europe this year, the U.N. said Tuesday, amid mounting tensions among EU nations on how to tackle the crisis. Nearly 2,250 people have died in 2017 attempting the sea crossing from North Africa, the U.N.'s International Organization for Migration (IOM) added. While the numbers arriving in 2017 are staggering, they remain far below last year's figures. During the same period in 2016, 231,503 people made the crossing to Europe, with the 100,000 mark passed already in February that year. Italy has taken in nearly 85 percent of the arrivals, most of them sub-Saharan Africans crossing from Libya, and has pleaded for help from other European Union nations, saying it is struggling to cope.