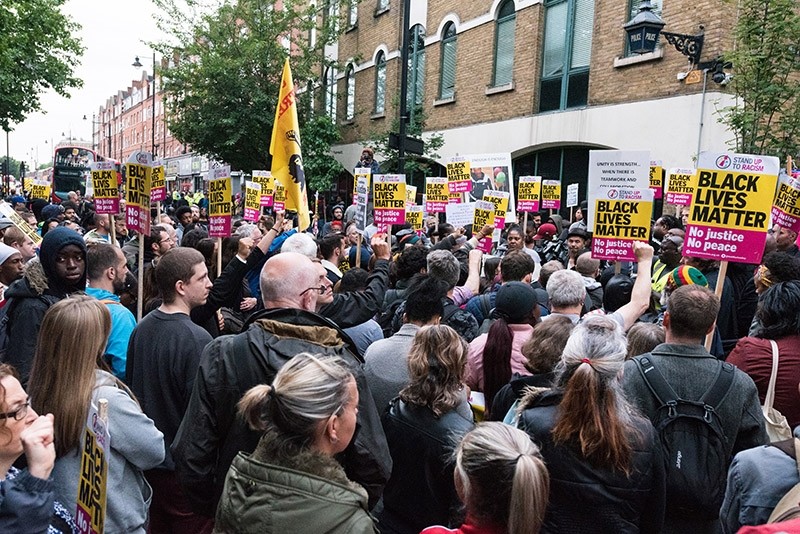 Protesters gathered Monday in front of the London police station to draw attention to the way police officers handle detainees, following the death of a 20-year-old man who died after swallowing an object and being restrained during a chase.

The angry crowd of up to 150 people were seen chanting slogans like "no justice, no peace" and holding various Black Lives Matters posters, before setting fire to nearby trash cans and blocking roads.

The protest organized by activist group Stand Up to Racism united people of all races and ages, seeking justification for the alleged police brutality, media sources reported.

Footage of at least one police officer trying to restrain 20-year-old Rashan Charles previously appeared on social media, showing the two on the floor of a shop in east London's Kingsland Road.

The Sunday incident reportedly led to the hospitalization of Charles at the Royal London hospital, where he died shortly afterwards.

According to London police, Charles was seen "trying to swallow an object," upon which a police officer intervened to prevent him from "harming himself."

Chief Superintendent Simon Laurence who is responsible for the police officers in question said in a statement that all police officers understood that they would be asked to "account for their actions."

"I understand his death has had an impact on some members of the local community," Laurence added, highlighting that the wanted to hear community concerns.

The death of Rashan Charles has was the second police-involved incident in London over the past month. 25-year-old Edson Da Costa also died after being restrained by police in east London's Beckton, raising concerns over increased police brutality in the city.